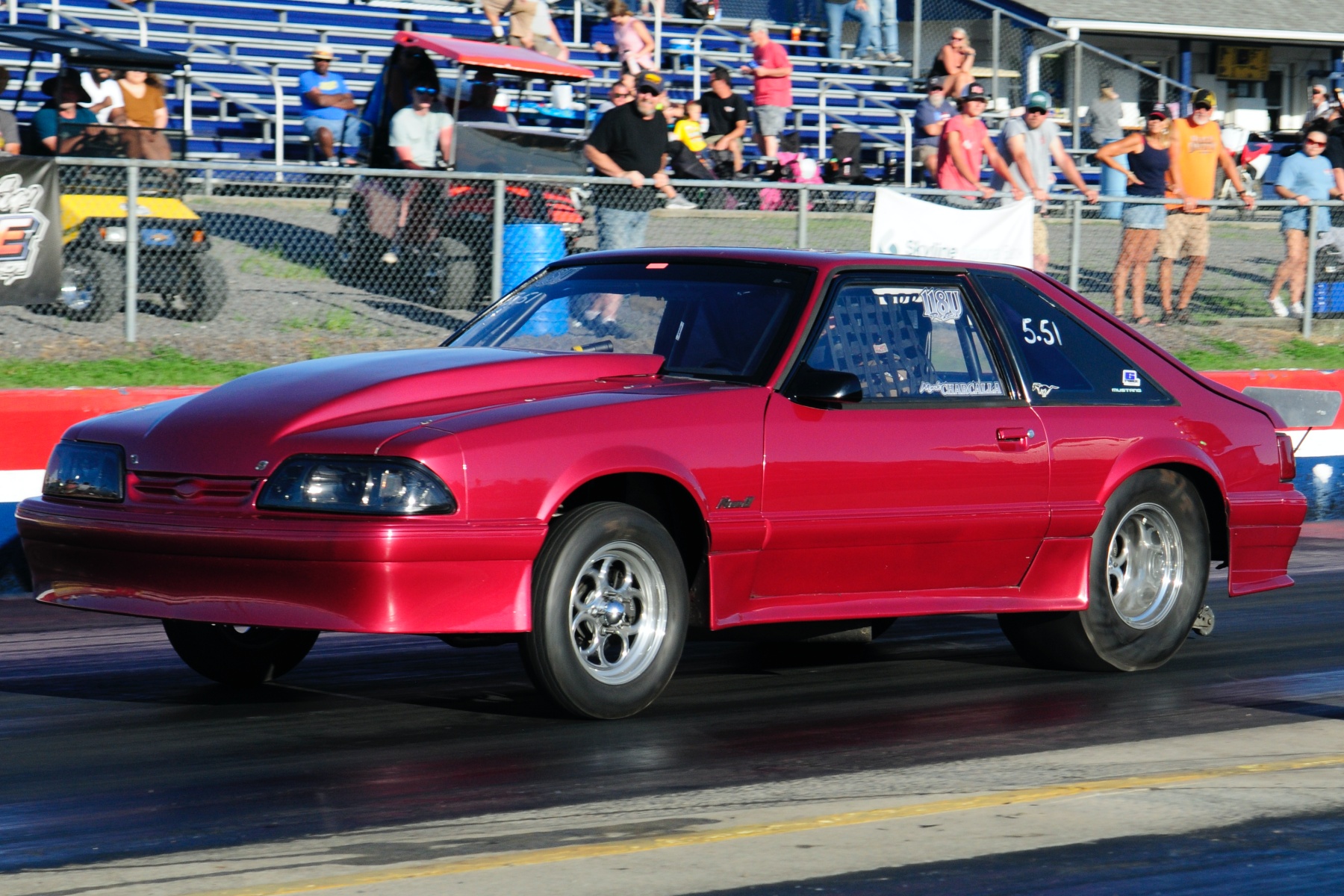 The Greg Butcher Trucking Stick Shift Nationals has become a legendary event at North Carolina’s Farmington Dragway for a number of reasons, not the least of which is the fact that this race is completely free to enter, and includes huge payouts with several chances to score big.

Not only is the $10,000-to-win main event completely free to enter, the same goes for the Scarlette’s Performance Gambler’s Race on Friday night, which awards $5,000 to the winner and pays eight places deep. Basically, everyone who enters this event gets paid to race, with zero entry fees across the board.

This gathering is also gaining notoriety for the fact that Saturday’s main event has never had a repeat winner, including the recently completed 12th running. Mark Charcalla made the long trip from Pennsylvania to become the 12th original winner of this race’s main event, getting past Colton Krishner in the thrilling finals. Charcalla drove his 1990 Ford Mustang – a car he’s owned since high school – to the winner’s circle.

In fact, he nearly swept the whole weekend after he first scored a runner-up finish in Friday’s gambler’s race, but Virginia’s Will Hull delivered a starting line advantage in his Camaro and never looked back, thus collecting the $5,000 purse. “I choked on Friday night…I ain’t gonna lie…I had a bad light,” Charcalla confesses.

Saturday’s main event victory did represent sweet revenge for Charcalla, as he and Krishner have a storied past. “Last year, me and Colton were battling for the Pro Stick championship, and it came down to the last race of the year in Maryland, and he beat me to win the championship, so I kinda got redemption on him at Farmington,” smiles Charcalla, who’s a 2012 champion within the Pro Stick Series.

Charcalla’s Mustang that once carried him back and forth to high school is a vehicle that he says he’ll never part with. It’s always been a manually shifted car, but is now anchored by a G-Force 5-speed and motivated by a 429-cubic-inch small-block Ford powerplant that propels the car to 5.40-second elapsed times in the eighth mile.

“Sure, it was a long haul from Pennsylvania for me and my dad and my uncle, but there’s just nothing that compares to this race, and I’ve got to give a shoutout to my whole family for all their help. There’s actually nine of us in my family that race,” says Charcalla. 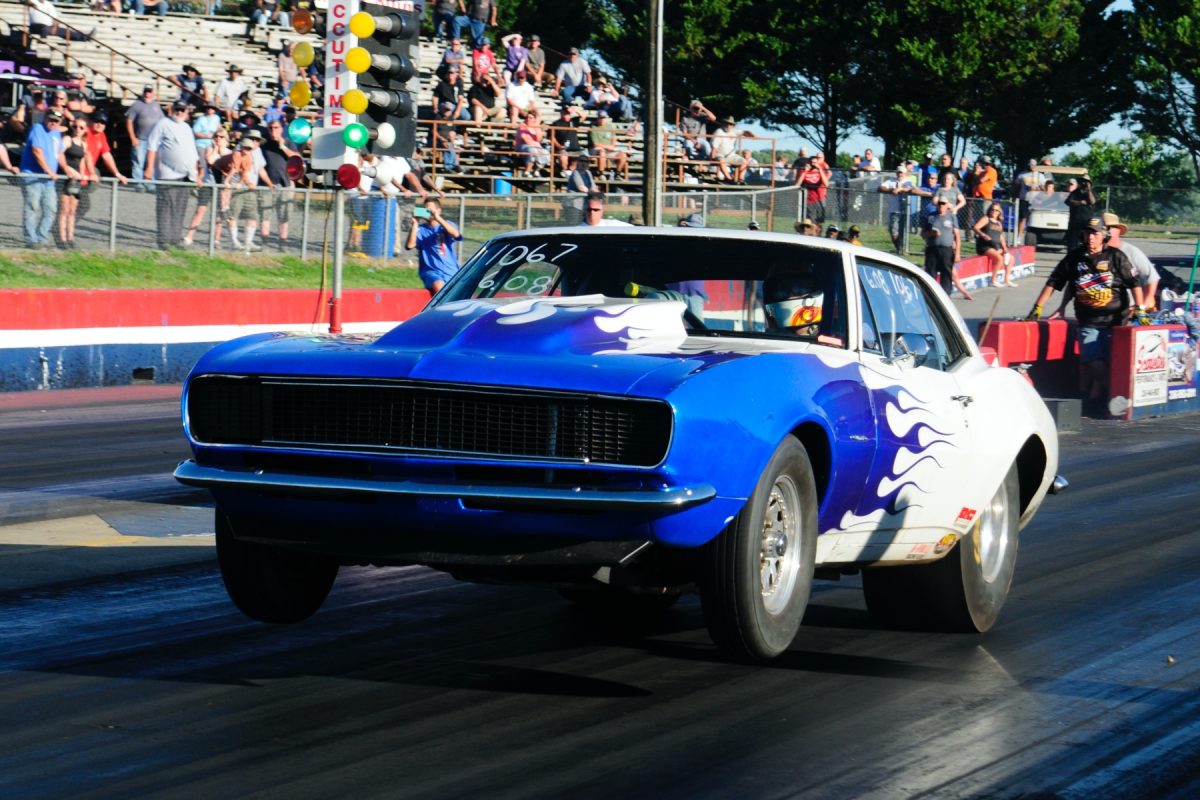 While the main event has never had a repeat winner, the Second Chance race has had several over the years, and the most recent running saw it happen yet again, as Bill Hull went the distance on his second attempt to score the victory over Kenny Regenthal Jr., whose past accomplishments include a main event final-round appearance in 2016. Chad McCreary drove his dad’s 1957 Chevy Wagon to a semifinal finish, with Cam Drake picking up the Dash for Cash victory.

The Stick Shift Nationals continues to be one of the most impressive growth stories, starting with just five cars at the inaugural event, and eventually hosting a record 176 cars in 2021.

“All things considered, I’m happy with the car count of 136 this year,” comments Regenthal, as he referenced the rampant inflation and record fuel prices as an obvious hindrance. “Our friends from the Pro Stick organization turned out in large numbers and the Classic Gear Jammers really represent. These dedicated club racers make up a huge demographic.”

Roughly four years ago, Butner Construction stepped up and was responsible for making the winner’s purse $5,000, but it obviously didn’t stop there. It was at last year’s event when Greg Butcher – a complete stranger at the time – walked up to Regenthal and pledged $10,000 to the winner of the 2022 running. Every bit as mind-boggling as his $10,000 pledge was the fact that last year’s event was the first drag race Butcher had ever attended! 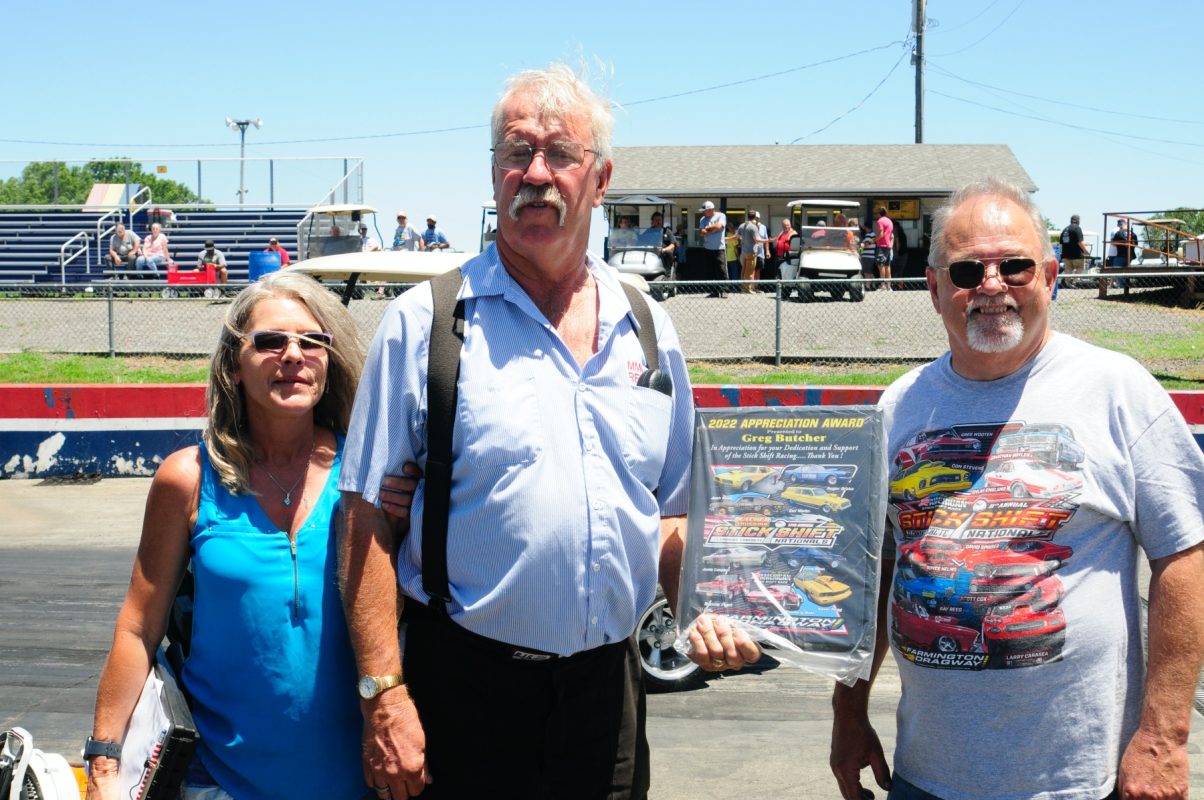 Butcher wanted to join the gear jammer movement and had recently purchased the 1967 Chevelle of his friend, the late Steve Tedder. On the Monday following last year’s event, Butcher called Regenthal and reportedly told him to come get the money. Just in case he died, he wanted Regenthal to have it. “Those were his exact words…I’ve never heard anything like that in my life!” marvels Regenthal. And Butcher promptly committed to sponsoring the 2023 event with another 10 grand.

The Scarlette’s Performance Friday night gambler’s race is another aspect of the Stick Shift Nationals that’s taken off in a very short amount of time. The gambler’s race wasn’t even on the schedule last year and was thrown together the week of the event. On the Monday before the race, Regenthal put out the word on social media, and Farmington was promptly flooded with 110 race cars. Fast-forward one year and now the event pays $5,000 to win thanks to Sandy Scarlette of Scarlette’s Performance.

It’s Regenthal’s textbook sponsor gathering that has made this event what it is today, and many of those sponsors have supported the event since its inception.

As always, Ken heaps high praise on his wife, Lisa, for all she does to make this race happen. “Also got to say thanks to our son, William, who kept up with all the statistics this year and was a huge help,” Regenthal adds.

As the event continues to gain notoriety, it’s become the stick shift racer’s bucket list event and shows no signs of fizzling out anytime soon.