If you’ve spent any time whatsoever in the world of drag racing – whether as a racer yourself, or as a crew member, family member of a racer, or a stark-raving-mad fan – it’s almost a certainty that you’ve figured out over the course of time the best places at the racing facilities you frequent most often to grab a drink or a nice bite to eat.

For someone who quite literally grew up at the drag races and was often given the opportunity to drink Diet Coke or nothing at all, and eat ham and cheese sandwiches or nothing at all when at the track, I can’t begin to explain to you how enjoyable the last 15 years have been as I’ve been able to have at least a little control over the menu. It’s funny…I can still vividly remember my dad asking me to pack the coolers up – a pair of good-size red-and-white Igloo units – and having emptied a fourth case of Diet Coke into them asking, “Do you think we should pack some water or something?” I already knew the answer.

When I grew tired of ham and cheese sandwiches, which happened pretty early, I remember experimenting with sandwiches comprised of bread, cheese and various, imaginative combinations of condiments and potato chips. Still to this day, I’d have a hard time turning down a white bread, American cheese, mayonnaise and Ruffles sandwich. They’re f#$&*ing awesome.

Anyway, having spent the last decade-and-a-half on the road going to the drag races and a slew of our team members here at DRAG ILLUSTRATED having done the same thing, we’ve made the decision to start sharing our findings, experiences and offering a few recommendations along the way. We’ll present this information in a variety of ways, but with this weekend’s No Mercy 9 event at South Georgia Motorsports Park outside of Valdosta, Georgia, I’m going to be direct – this is the straight dirt on food and drink when drag racing near the Florida-Georgia line.

First and foremost, I believe Outback is one of the most consistent chain restaurants on the planet. If you order something at Outback in Valdosta, Georgia, say a half-order of bacon cheese fries to get started, followed by a filet mignon cooked medium-plus with a double-salad sans cherry tomatoes with extra honey mustard, I can assure you it will look, smell and taste the same when you roll into the Outback in Baytown, Texas (shoutout to Lorraine), next spring during the NHRA O’Reilly Auto Parts Spring Nationals.

Consistency is a big deal to me, personally. Pro tip: It’s a trait that I see in the Hampton Inn hotel chain, too.

Secondly, the bar at Outback is legit. I like the shape of it, the staff at this particular location is fantastic and being that I typically make as many as three trips to this area a year, I’ve noticed they don’t have a lot of turnover. It’s not at all unusual to see the managing partner working the bar and chatting with guests, and here in 2019 – that’s a cool thing to see.

Great service, consistently good food, a great drink menu and a decent wine list, in my opinion, makes Outback a lock for high-level racer dining in Valdosta – mainly because they don’t close until 11PM and won’t get in a big hurry to run you off if you’re in there late (typically). I’m a well-known meat and potatoes kind of guy, and I can’t say enough about the filet at Outback if you’re able to keep your expectations in check. They have a lot of great appetizers, too, and no matter what you see on television, I’d stay away from that blooming onion situation. A deep-friend onion ball about the size of a basketball? Yeah, no.

Murder Tundra, not surprisingly, will hit you with an immediate recommendation for the ribeye, and I’d stand behind that, too – even though it’s a little fatty for my liking. My point is there are options. I’ve heard a lot of good things about their burgers, and I’ve seen some chicken dishes come out that look great. My go-to here is the aforementioned cheese fries, filet and double-salad. I really, really like the salads at this place. It’s nothing special, but it’s above-average fresh for a chain restaurant of this caliber, and it pairs really well with the steak and I don’t feel like a complete piece of trash for eating it – especially if I only “pick at” the appetizer (great strategy).

Lastly, and I don’t know what the hell the deal is with this, but I don’t care how much VHT and rubber you have on the bottom of your shoes, you better be careful when walking toward the bathroom – that floor is SLICK and you WILL fall down. They need to get Tyler Crossnoe in there or something and put a couple layers down. It’s unbelievable.

The internet will tell you great things about a few places in Valdosta. You’ll read positive reviews about some place called Mom & Dad’s, 306 North – which looks like a fairly legit steakhouse with a solid menu and wine list – Austin’s Cattle Company (which is actually quite good) and a host of others, but they rarely offer the amenities important to racers, namely that their doors are still open come 10PM or later. 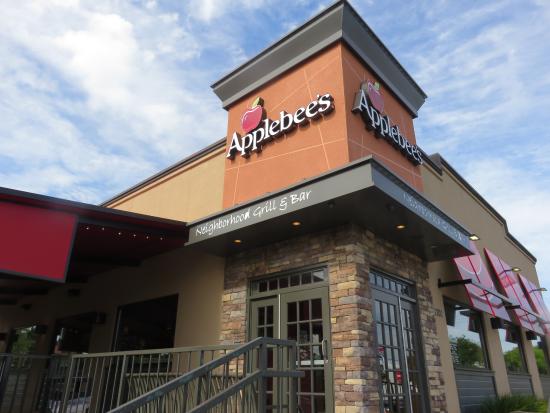 Oh, everyone’s going? All your friends are going to be there? Great. No problem. Go through the drive-thru at Taco Bell and grab something to eat, save your time at your friendly neighborhood Applebee’s for drinking.

There’s a couple reasons for plan of attack. First off, and this is a big one, they are almost always offering two-for-one cocktails. They typically won’t let you turn that special into doubles, but they’re willing to make you two drinks every time you order one. It’s fantastic.

Secondly, the food is typically terrible. Applebee’s can be OK, they really can and I encourage them to keep trying, but they lack the aforementioned consistency of a Hampton Inn or an Outback.

It’s a tough deal, too, because they have racer-friendly hours of operation – the importance of which cannot be overstated. And you’re right – you WILL see a bunch of your racing friends there, and they’ll likely be racers from far-away places like Austrailia or Bahrain. I don’t know why, but foreigners seem drawn to something that consistently uses the words “friendly” and “neighborhood” in their marketing message.

If it’s drinks you’re after (and who could blame you?), I can’t argue with Applebee’s. It’s the food that I take such issue with. I’ve tried a variety of things ranging from burgers and chicken sandwiches to salads and a couple different steaks and they’ve all tasted the same – horrible.

RULE NO. 4: A bunch of your friends will be a Hooters.

If you’re completely OK with what I’d call decent food, decent drinks and the company of familiar faces, you may not look any further than Hooters – which is conveniently located next door to Outback in Valdosta.

Their chicken wings are fine and they do have several decent appetizers, but I’ve had mixed experiences with the service there – almost always friendly, but almost always slow (real slow).

Their hours will work in your favor if you’re getting out of the track late, and if fried food and beer seem to work well enough with your body – it’s not a bad option.

RULE NO. 5: Nobody, Repeat Nobody Has Any Idea What is Going On

This one is a tough one for me to comprehend, but you can count on there not being one single human being working at any restaurant in or around Valdosta, Georgia, that has any idea whatsoever that there is a major racing event in town. It floors me.

Bring in some additional wait staff? Be a little forgiving with the hours? Prepare for a sure-fire late night rush of painfully hungry and thirsty racer folk? No chance.

The best food in the world? The greatest service imaginable? I’m going to say no to both, but I will say that they strive for some level of consistency with their food and they off-set not having booze by never closing. If your stomach is strong enough, it’s hard not to actually choose Waffle House a couple times per race season – just to say you did it, just to say the words “smothered and covered” without it being weird, and to maintain your street cred.