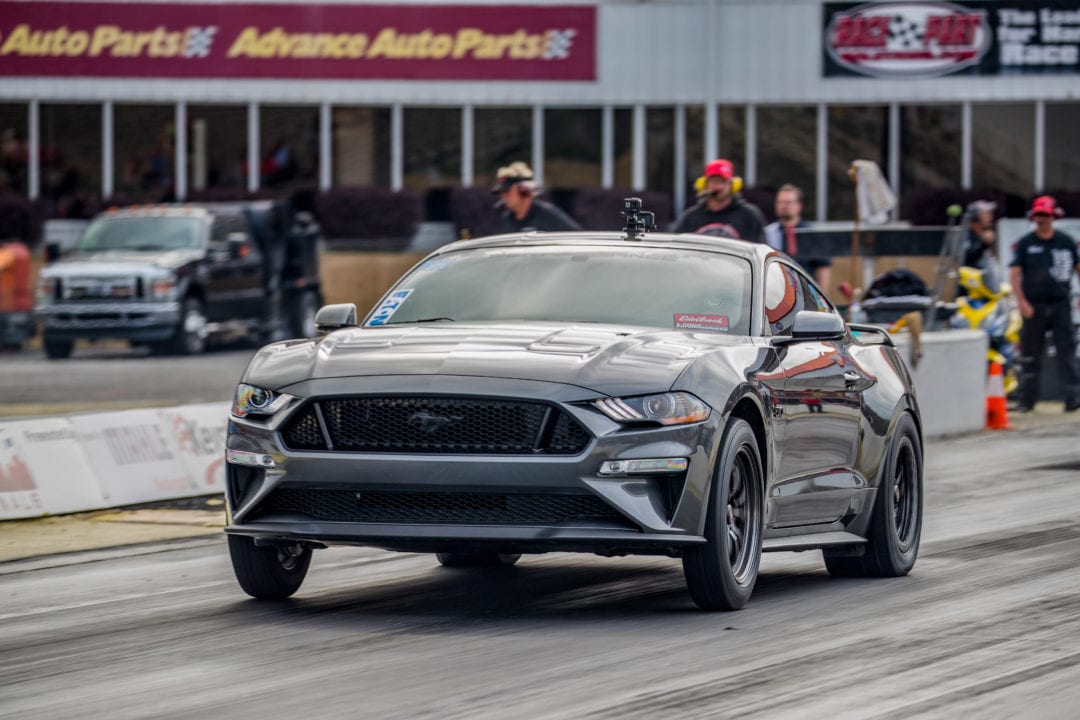 A wet start to the weekend on Friday threw a wrench in the racing schedule, but the NMRA and NMCA staff worked hard to get the track ready as quickly as possible to maximize the racing at the 11th Annual Scoggin-Dickey Parts Center NMRA/NMCA All-Star Nationals presented by MAHLE Motorsport. Atlanta Dragway in Commerce, Georgia, hosted the second stop on the NMRA Keystone Automotive Ford Nationals tour with traditional southern hospitality and the race was able to be run to completion. Despite the unavoidable delays, winners were crowned, records were set, and new parts wish lists were made as another exciting chapter of NMRA drag racing was officially added to the history books.

Phil Hines captured the coveted number-one qualifying position in the NMRA and NMCA combo VP Racing Fuels/Mickey Thompson Street Outlaw class, besting the bunch with a 4.373 at 164.49mph pass out of his ProCharged ’01 Mustang. The final came down to the number-six qualifier, Rob Goss, and the number-two qualifier, Vince Palazzolo, and neither left anything on the table when they left the line. Ultimately, Rob Goss was the quicker contender—both with his 0.008-second reaction time and with his ’09 Dodge Challenger’s 4.38-second eighth-mile trip—to take down Palazzolo’s valiant 4.39 effort in his ’09 Mustang and take a trip to the Aerospace Components Winner’s Circle.

NMCA racer Jessie Coulter topped the qualifying list in the NMRA/NMCA Edelbrock Renegade/Xtreme Street combined class. Coulter cruised through the rounds all day long until he reached the finals, where Tim Knieriem had also earned a chance to run for all the marbles behind the wheel of his ’95 Mustang. After a small Ford-vs-Chevrolet staging battle, the green light lit and Knieriem left the line in a big wheel stand. Coulter used the opportunity to drive around him, and picked up the win, going 4.73 while Knieriem stopped the clocks in 4.87-seconds instead. 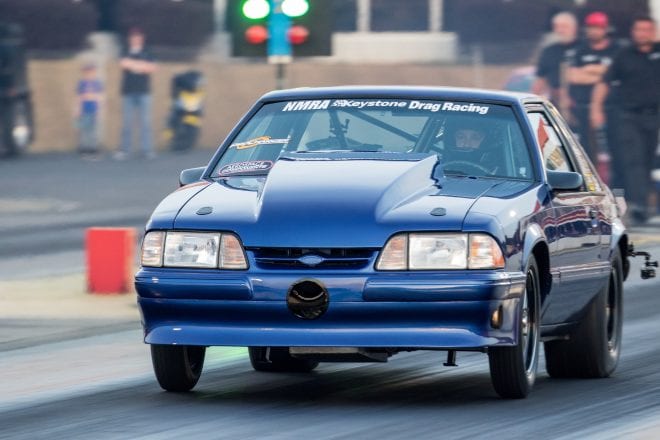 In ProCharger Modified Street, it was Bob Cook and his ’90 Mustang GT that claimed the top spot after qualifying had been finalized thanks to a 7.789 at 178.68 mph blast. Cook went out in the semi-finals, but Brad Scher and Martin Connelley were still in the game. The number two and number four qualified drivers, respectively, met up in round three for the finals, and it was a battle of the ‘80s-era Mustangs. A close match down the track ended with Scher edging out Connelley at the stripe, 7.84 over 7.89, picking up his second win in a row for the year, and his second trip to the Aerospace Components Winner’s Circle.

Qualifying in Advanced Fuel Dynamics Limited Street saw last season’s champion, Michael Ciborowski, show that he’s still the man to beat as an 8.736 at 153.89 mph proved his ’14 Mustang was the quickest of the class in qualifying. Eliminations, however, wound down to Bill Putnam in his ’99 Mustang who qualified fourth, and Chad Wendel in his ’07 Mustang GT who qualified fifth. Wendel had the holeshot, but Putnam had the power and drove around him to finish out the weekend with a winning 8.905 time slip in his hand.

Mike Bowen and his beautiful ’71 Maverick made the most of Richmond Gear Factory Stock qualifying when he stopped the clocks in 10.307-seconds and qualified number one. Bowen continued to find success in eliminations and finished in the finals along with Dan Ryntz, last season’s champion and the number-two-qualified driver of the weekend. It was Maverick versus Mustang, and Ryntz added another win to his roster when he ran 10.38 to defeat Bowen’s 10.42 and made it back-to-back wins this season so far.

Meanwhile, in G-Force Racing Transmissions Coyote Stock, Clair Stewart II was driving his ’91 Mustang and took the lead by a slim margin as his 10.184-second pass placed him at the top of the qualifying list. Darin Hendricks, the 2018 season champion, was hot on his heels when he qualified number two in his ’93 Mustang Cobra, and the two men made it all the way to the last run of the weekend. They went in quick when the finals began, and although Hendricks had a two-tenths advantage on the starting line, he couldn’t hold on to the lead when Stewart muscled past to clock a 10.20 over Hendricks’s 10.44.

Shane Williams chopped down the tree in Exedy Racing Clutch Modular Muscle qualifying and his perfect 0.000-second light inked his name in the number one position alongside his ’99 Mustang. Williams kept up the momentum and met with Johnny Rusch and his ’06 Mustang in the finals, where Rusch unintentionally red lighted—so even though he ran dead on his dial, the run didn’t count—and Williams went home a winner for the second time this season with an 11.912 on his 11.91 prediction.

The large, 30-car ARP Open Comp field was cutthroat, but Mel White produced a cool, quick 0.002-second to start eliminations from the number-one position. After five fierce rounds of eliminations, only Ashley Conway Lang and her ’94 Cobra and Steven Wieczorek and his ’86 Mustang remained. Both had good lights, but Wieczorek broke out while Lang was only four-hundredths over her index and she was victorious in her efforts.

Johnny “Lightning” Wiker’s 0.010-second reaction time in his ’99 Ford Lightning ranked him number one in Detroit Locker Truck & Lightning qualifying. When the final pairing had been established, Amanda Saad and Fred Wade had the honors of making one last trip down the dragstrip. Qualified sixth and second, odds were in Wade’s favor with his ’04 Lightning but he turned the red light on at the start and Saad was gifted the win as she drove her ’83 Ranger straight to success.

Setting the stage in ROUSH Performance Super Stang qualifying, Robert Ball’s 0.007-reaction time put him in first for the qualifying order going into eliminations. Ball’s luck ran out early in eliminations, but Miles Wagoner and Andy Ransford had a better time of things and met in the finals as a result. Wagoner, driving his ’16 Mustang, doubled up on wins in as many races when he went 10.458 on his 10.42 dial and sent Ransford and his ’06 Mustang back to the pits as his 14.181 pass on his 13.98 dial couldn’t get it done.

n the Race Star Wheels Ford Muscle index class, 2018 champion Bryan Parker was the picture of professionalism when he ran dead-on his dial with an 11.500-second pass with his ’68 Mustang in qualifying and easily captured the number-one slot. He held his advantage all the way to the finals where he staged with David Mormann and his ’70 Mach I in the opposing lane. Parker had the advantage off the starting line and stayed consistent in his numbers, triggering the win light in his lane while Mormann was deemed the runner-up.

The special Street Outlaw All-Star Shootout class paired the 2018 NMRA and NMCA Street Outlaw champions along with wildcard and blocker drivers in an elite field of the fastest, but only two were left standing in the finals. The air was electric as Phil Hines lined up against Vince Palazzolo, Mustang vs. Mustang, but trouble struck in the left lane as Palazzolo biffed the start and the win was awarded to Hines, whose 4.393 at 161.75 mph pass made things official.

It was Ford versus Chevy in the NMRA vs NMCA Sealed Stock All-Star Shootout, and one representative from both NMCA Chevrolet Performance Stock (Jesse Wilson) and NMRA G-Force Racing Transmissions Coyote Stock (Darin Hendricks) each made it through to the finals. It was a tight match, and Team NMRA’s Hendricks put in a respectable 10.225-second pass, but ultimately the win went to Wilson and Team NMCA for the second year in a row.

Finally, in the Open Comp Shootout, the NMRA and NMCA contestants went head-to-head once more and the field of sixteen was whittled down to just Dennis Corn representing NMRA and Cameron Bowles representing NMCA in the finals. it was a double-breakout situation where both men ran well under their numbers, but the win light turned on in Corn’s lane courtesy of his ’88 Ford Thunderbird’s 9.272-second hit and the NMRA racers enjoyed a justified celebration.

The new EATON TVS Supercharger Throwdown was an exciting class with lots of capable entries, but top qualifying honors went to Oscar Morin in Ariel Salinas’s “El Toro” ’16 Mustang when he ran 8.684 at 156.81 mph. Morin bullied his way into the finals to be paired with “The Iceman” Brian Devilbiss, and the two contenders were equally capable. Both left well, but Morin had his hands full off the line as “El Toro” rebelled, leaving the door wide open for Devilbiss to secure the win with a 9.27 over Morin’s 11.90.

An absolutely massive number of QA1/Gear Vendors True Street entrants dusted off their builds to prove their street worthiness, and Dana Beaty of Walhalla, South Carolina, was the only one to average an 8-second elapsed time. His ’86 Mustang, which runs on a nitrous-injected big block Ford engine, had a quickest run of 8.672-seconds and averaged 8.981-seconds for the overall win and an invitation to the coveted IDIDIT King of the Street competition at the NMRA World Finals later this year in Kentucky. Taking the runner-up spot was Jason Beardslee who averaged 9.081-seconds across his three runs. Dustin Edwards was the winner in the 9-second section, while Rick Baum won the 10-second group and Cody Poston topped the 11-second segment. Michael Dabbs picked up the win for the 12-second group, Randy Pethel won the 13-second average, Tyler Thornburg was the 14-second winner, and Allen Smith took the final victory in the 15-second bunch.

The NMRA Keystone Automotive Drag Racing Series continues with its return to St. Louis at Gateway Motorsports Park in Madison, Illinois, on May 16-19, 2019 with the Inaugural NMRA Gateway Rumble.