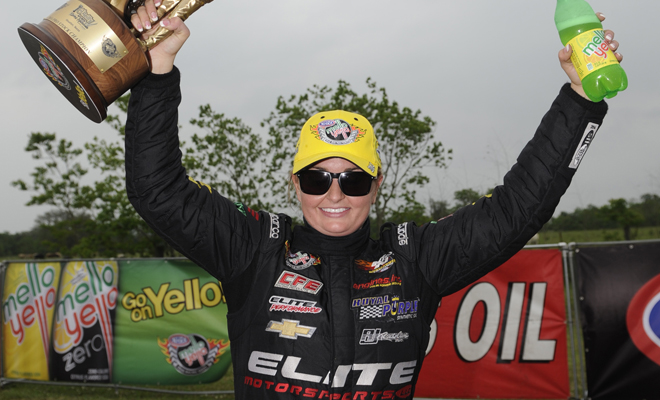 Erica Enders-Stevens, driver of the Elite Motorsports Chevrolet Camaro, is second in NHRA Pro Stock points, trailing Jason Line by only 35 markers. If she were to win the championship, she would be the first female to win a Pro Stock world championship. Enders-Stevens, who has four wins this season, which ties a career best, five No. 1 qualifying positions and only one first-round loss, took part in a national teleconference to talk about her season and her hopes for the remainder of the Countdown to the Championship. 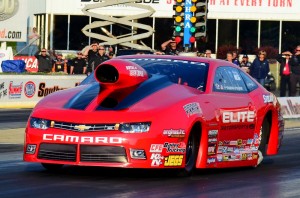 Q: You’ve led the points 13 races this year, now you’re in second. Which one is easier or harder, being the hunted or hunter as you go into these last two events?

Enders-Stevens: I don’t really know honestly. It was definitely fun. It’s the first time in my 10-year Pro Stock career we’ve ever led the points. To be able to do it for 13 events was certainly fun. By no means was our objective to allow someone to go around us. We were forced to miss two races on the Western Swing. We’re just doing the best we can with what we have. Having said that, I just try to focus at the task at hand, that’s one race, one round at a time, just not get too ahead of myself. We’re definitely still in the hunt significantly. With the qualifying bonus points that we’ve been acquiring this year, it is certainly doable. We can go into Sunday in Vegas, if we’re able to do what we’ve done at the last few races, qualify (in the No. 1 position), be low, we can go into Sunday less than one round behind Jason Line. We’re going to go in and focus and see what happens.

Q. Is there any more pressure now that you have these two races and you have this opportunity to make history? How do you approach it mentally?

Enders-Stevens: Mentally I’m just going to go into it like I’ve done all year. I’d be lying if I said there wasn’t any pressure. There’s been pressure all year long. My team has performed tremendously under it. My crew chiefs continue to give me a good racecar week in, week out. We have to battle it out. The pressure was immense in Reading, being able to see what was happening in front of me with (Dave) Connolly who was first in points of me, then Jason Line being beaten by my teammate second round, we had the opportunity to make up some ground. My stomach was a little tighter than normal. But having said that, I’m going to focus just one round at a time. I know I keep saying that. But I don’t want to get ahead of myself and focus on something that’s not ours yet. We just have to continue to focus to get there. 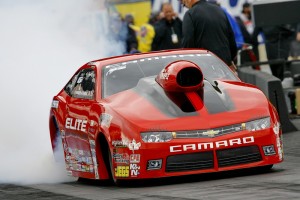 Q. The mental process that you have to go through all season, how does that compare to right now? While you’re going through this, fans might want to know, do you have time to think about anything during the off-season?

Enders-Stevens: Sure. The pressure is immense in the Countdown. These final six races are extremely crucial. Leading the points all year, our largest lead being 240 points, ahead when the Countdown goes into effect, everything goes back to equal. Our domination was cut significantly. We’ve just got to focus on these last six. It certainly didn’t start the way we wanted it to. It did at Charlotte, qualifying on the pole, being low for every session, then with the track condition being what it was had to move the event to Dallas. So Charlotte and Dallas being run in the same week, we didn’t perform as well as we had hoped. Kind of behind the eight ball a little bit. Swinging as hard as we can. The pressure is certainly there. I honestly haven’t changed my mindset at all as far as how I prepare. I mean, nerves are high. But it’s just really weird. I think the majority of the drivers would agree. When you fire the car, all of that goes away and you just have to focus on what you’re doing. You could be sick, feeling terrible, just really nervous. But when the car starts, everything goes away. I’m pretty sure my heart rate goes back to normal once the car fires. I’m able to focus on what I need to do. As far as the off-season is concerned, I will be returning to Elite Motorsports in 2015. We’ve secured our partnership. We’re going to race together as long as we can. My team owner Richard Freeman has made that pretty evident. I’ve never been happier, honestly. I’ve got the best team in the world. For the first time in my professional career, I have a group of guys that have my back and we’re having a lot of fun with it.

Q. Would you compare the two weeks that you skipped during the middle of the season to the time you’ve had off, which would have occurred no matter what, waiting to get to Las Vegas.

Enders-Stevens: Sure. I mean, both weekends off I’ve been antsy and wanted to get back in the racecar. It’s hard to start the Countdown off with four races consecutively and go three weeks of downtime. I’ve been working really hard on the sponsorship aspect of things, traveling a lot to our shop base in Oklahoma to work on that stuff, and of course our engine department, Elite Performance, has been hard at work at finding more horsepower. In a way it gives us more time to work on the funding aspect and horsepower aspect. As a driver, I’d rather be in the car every day if I could. It’s pretty similar. Sonoma and Seattle were something we didn’t want to do but had to do business-wise. This is just a little mini vacation NHRA has allowed us. We’ll go back to Vegas all rested up and ready to get out and start swinging. 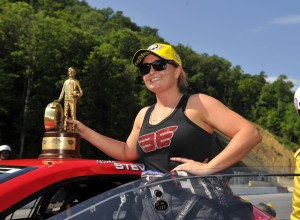 Q. Once Vegas is over with, you get another week off. Is that an important week off or would you rather go straight to Pomona right after Vegas?

Enders-Stevens: Like I said, I’d rather be in the car every day, if I could. But in between Vegas and Pomona, they have SEMA. I’ll be there all week working with my sponsors, Royal Purple, GM, Chevrolet, and my team owner Richard Freeman and my engine builders will be there. We’ll get to work on things in that downtime as well. I guess it won’t necessarily feel as long of a downtime as it really is, then we can head into Pomona fresh.

Q. You’ve been racing for a while. Women’s success in racing, can you touch on that?

Enders-Stevens: Sure. I’m honored to be a part of the movement. It’s really cool. I’ve been involved in racing as a driver for 22 years now starting in junior dragsters when I was eight years old, moving on to Super Comps, dragsters, Pro Stock. It’s been an awesome experience for me. I’ve been a huge fan of the ladies along the way. Now being a part of it with Courtney and Brittany Force, before they started with Ashley, I started racing Pro Stock in ’04, so I was around when she was racing Funny Car as well. That was a lot of fun. Alexis DeJoria, they’re all extremely talented. I think we secretly root for each other. I know I do. I try to get up there and watch as often as I can. Now with Angelle back, she’s the winningest female driver in NHRA history with 41 national event wins, Shirley will be out, I was able to talk to her today. It’s really neat to be a part of it. I’m proud of the girls that have done it before me and the ones I’m having the opportunity to do it with now. It’s just a pretty exciting time for our sport. 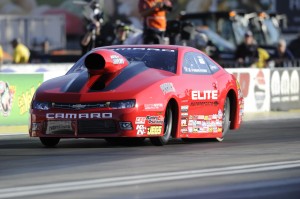 Q. You’ve been in Pro Stock for quite a while. This seems to be a breakout year for you. What do you attribute it to? More money for parts, confidence in the car, your team? What has helped you get to this marvelous point where you are right now?

Enders-Stevens: My team. Teamwork makes the dream work. That is absolutely so true. We operate on half of the budget that I operated on when I drove for Victor Cagnazzi for the last three years. We’re a small team running on a small budget, but we’ve been able to accomplish a lot of really cool stuff this year because of the people involved. They’re the most important part of the puzzle. Richard Freeman, my team owner, has assembled a tremendous group of people on and off the track. They’re talented on track, but they’re just great guys to the core. I mentioned that earlier, but that’s the first time I’ve had that in my 10-year professional career. I attribute our on-track success to that. It’s a no pressure, no drama situation, and I’ve never had that before.

Q. Last year the Elite Motorsports team qualified for some events, Rickie Jones driving the car, won a couple rounds until he won the World Finals. You being in this car for the first year, did you expect to be in this position in the Countdown being your first year with this team?

Enders-Stevens: I guess we did. I mean, I’m an eternal optimist. I wouldn’t have joined the team if I didn’t think they were capable of what we’re doing. Having said that, Rickie Jones gave up his seat for me to drive. He and his father, Rick Jones, are my crew chiefs. It’s a really unique atmosphere. But, yeah, I mean, I hoped we would be here. I wouldn’t use the term ‘expected.’ I don’t want to come off arrogant by any means. I want to share my confidence in my guys. We’ve done a great job. We’ve missed out on quite a few races this year. I’ve lost on a few holeshots. We’ve shook. But we win and lose as a team. At the end of the day, that’s what’s most important. We’ve got a lot of heart. My guys have so much heart and determination and they never give up. You know when it’s crunch time, they really shine. I’m looking forward to these final two races with them. I know that together we can accomplish a lot of really cool stuff in the future. I’m hopeful to seal the deal this year. We’ll see what happens.