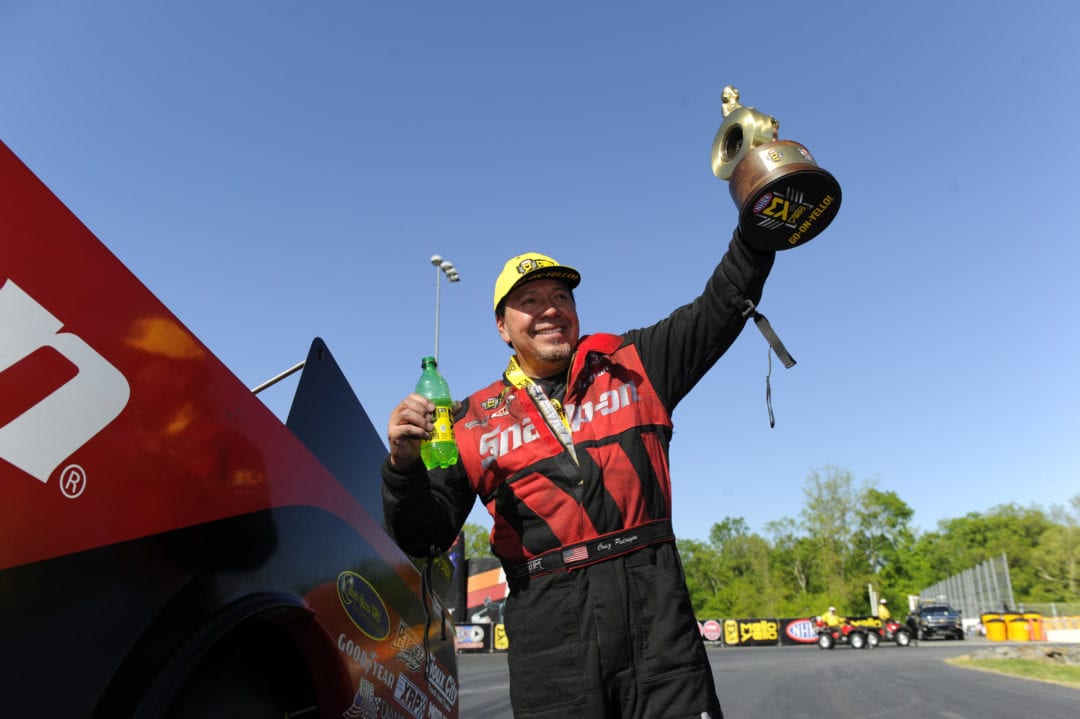 Without question, Cruz Pedregon is his own man. The longtime Funny Car standout does things his own way and is not afraid to let his opinion be known, a path the two-time world champion has worked hard to create.

Winning races wasn’t enough for Pedregon. He wanted to own a team, something that became a reality for the veteran. It has likely extended his career and, love him or hate him, allowed Pedregon to be himself. Pedregon is a distinct personality in the sport and with years of success and 36 career wins and 76 final rounds, he is not afraid to mix it up or speak his mind.

Of course, going at it alone can also have its difficulties, as Pedregon struggled in recent seasons in the star-studded, multi-car Funny Car teams. But after hiring Aaron Brooks to be crew chief in 2017 and bringing Glen Huzar on board before this season, Pedregon has two noted names in the sport at his disposal, and things have started to go a different route in 2018.  Pedregon snapped a 92-race winless streak with a victory in Charlotte, following it up with a solid semifinal showing in Atlanta.

Not surprisingly, while he posted one strong pass after another, Pedregon also wasn’t afraid to call out those who had criticized the recent track conditions.

Pedregon, who is fifth all-time in NHRA Funny Car wins, touched on that recent hot topic with DRAG ILLUSTRATED, also discussing why it was important for him to become a team owner, how he has been able to bounce back this season and why he feels it is important to speak his mind.

You made the transition from driver to owner several years ago. Why was that an important move for you?

I’ve had basically two careers. The early part of my career, I was a hired gun, a hired driver. I was one of many personnel on the team. I always wanted to own and be more of the decision-maker, and also to try to prolong my career. I never wanted to be an older driver without a ride, so I figured I better make a move. So in my 30s I became a car owner and it’s paying off. It feels great to do it on our own. It’s great for me to do it at this level, and to be winning, still, and to do it on our terms, so to speak.

Were there moments when your confidence wavered in this approach, and did you ever think about going back to being just a driver?

It crossed my mind early on, especially. After we won the 2008 championship, my crew chief left and so did the entire team. So here I was two years removed from a championship and everybody’s kind of jumping ship to go to the bigger teams. So I decided to take the bull by the horns and take a different approach. I ran my own program and I won races with it.

But I did hit a wall about 2015. In 2015 and 2016, I went without a bonafide crew chief and not that I needed one, but I kind of felt the technology in Funny Car reached a level where we were missing some key components of the puzzle.

At the end of 2016, I hired a guy (Brooks) capable of running a car. I didn’t want to be the guy that didn’t have time to sign autographs and didn’t have the technology or the information from other teams. Aaron is very well connected with Alan Johnson and the guy we buy our cylinder heads and a lot of our technology from, so it was a good choice. 2017 was a struggle, but the end of last year it started to pay off and six races into this year we won our first race in four years. It’s come full circle. But I wanted to do my own thing. Whether it was right or wrong, that’s what I wanted to do and I’m committed to that. 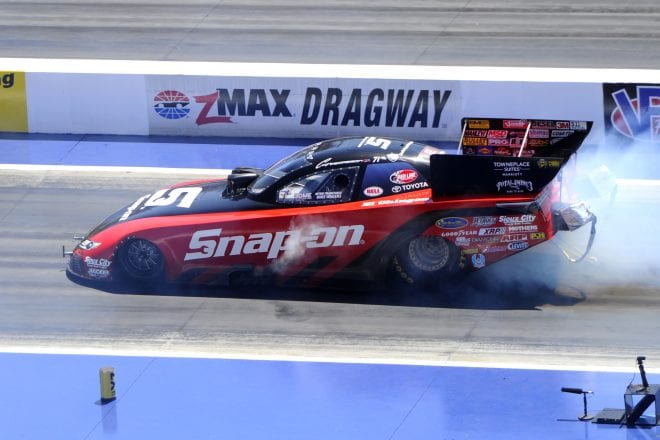 How were you able to get things turned around? Did you have to alter your approach any?

If you tally our years and success we’ve had individually, we stack up favorably against these guys. We’ve approached this year methodically, but also smart. Going down the track is our goal and it’s paid off for us. When it came down to race day on Sunday (in Charlotte), it was really about racing your car, not getting crazy and trying to make a hero run. We wanted to go up there and be smart. That paid off for us.

How hard was it to adjust that approach and maybe dial back a little bit, so to speak?

That took 30 years for me to learn. I was always the guy, ‘Let’s go show them that low E.T.’ Take it from a guy that’s qualified No. 1 a lot of times (61 No. 1 qualifiers in his career), nothing, I mean nothing, comes close to winning the race on Sunday. You could be in the middle of the pack and if you’ve got a good car, you’ll mow through that field like a hot butter knife. If you press the issue, it might be cool for your ego, but it doesn’t do anything to get the car prepared to do battle on Sunday.

Along those lines, there has been a lot of talk about track conditions lately, especially after the Charlotte race. What was your reaction to that?

At the end of the day, and I live by this, it’s not the NHRA’s job to conform to what we want. It’s our job to conform to the racetrack they provide. That’s the bottom line. You have to adapt to conditions and you can’t have everything go your way. At the end of the day, you don’t have to take big swings. You have to have the cajones to go out there, pull the car back, make it go down the track, and challenge your driver to cut a good light and make it from A to B. If you can do that consistently, you’re going to win a lot of races.

There’s this racetrack in Denver and it’s up in the mile-high and since the ’70s, they’ve been packing that place in. It’s probably the highest-attended race if you tallied the last 30 years. The Friday crowds, Saturday crowds, Sunday crowds, standing-room only and that place holds a lot of people. That track was always 2-3 tenths, sometime four-tenths slower than all the sea level tracks, so you can’t tell that crowd up there gives a damn about 3.80s (in Funny Car).

My point is that reason is not valid that they have to these monster conditions all the time because that’s what fans like. No, fans actually like some smoke, occasionally, especially if it’s side-by-side, but get to the finish line first.

I’ve always enjoyed the challenge that comes from running on a racetrack that has some personality. It makes for some great racing. I say congrats to NHRA for their track prep. I’m giving them two thumbs up. I think it’s great.

You aren’t afraid to speak your mind. Being in your third decade in the sport and having made more than 550 Funny Car starts, how important is that for you?

I do take heat for it, but one of the reasons I wanted to be an owner is I get to be myself. I don’t have an owner who is going to look at me the wrong way or threaten my job because I’m outspoken. My sponsors let me do my thing. I’m not bound by politics. I don’t have a crew chief that’s going to threaten to leave because I said something that threatened the crew chief world. I say what I say, and I’m grateful that I can do that, but I’m one of the last of Mohicans, man. What you’re getting now, buddy, it’s as authentic as hell. I don’t know how many years I have left, but I do want to make the sport better than I found it, and that’s why I do what I do and race the way I race, and I’m not so caught up in being everyone’s friend in the pit area.