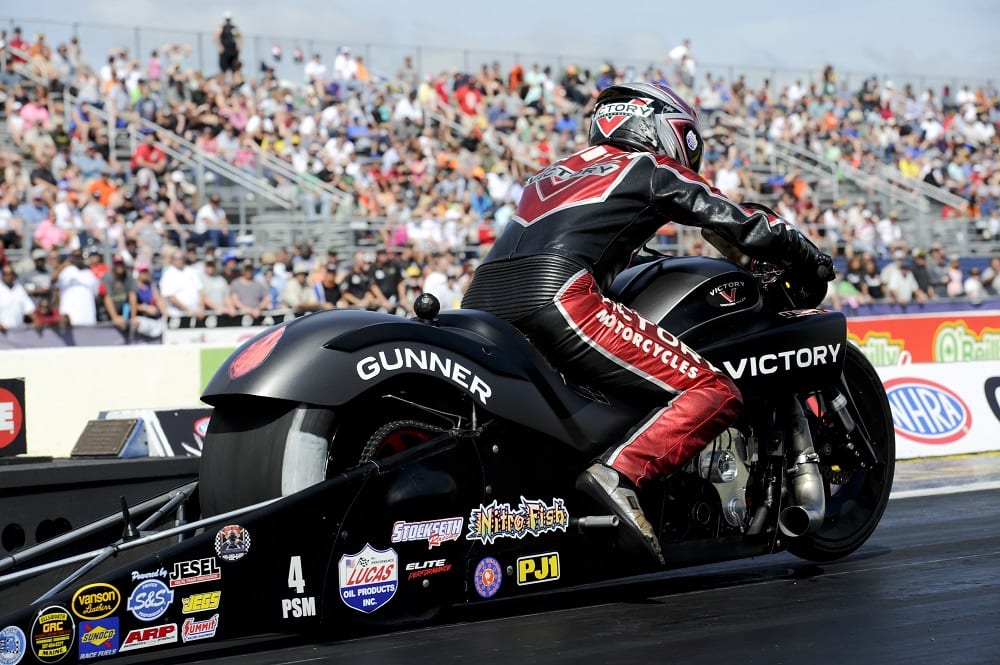 UPDATE: Drag Illustrated spoke to Matt Smith about Monday’s statement from Polaris Industries regarding their decision to shut down the the Victory Motorcycles brand.

“MSR (Matt Smith Racing) will move forward this year. At this time, we are unsure what manufacturer it will be with, but MSR is racing this year.”

In a surprise announcement Monday, Polaris Industries, the parent company of Victory Motorcycles, announced the Victory brand is halting production of the motorcycle and all related activities. Victory is the primary sponsor for two-time NHRA Pro Stock Motorcycle champion Matt Smith. Smith has ridden the Victory Gunner since 2015 and provided them with a Wally last November in the final race of the season. Smith’s teammate and wife, Angie, also rode the Gunners, but announced during the offseason she is returning to the Buell brand for 2017.

“This was an incredibly difficult decision for me, my team and the Polaris Board of Directors,” he said. “Over the past 18 years, we have invested not only resources, but our hearts and souls, into forging the Victory Motorcycles brand, and we are exceptionally proud of what our team has accomplished. Since inception, our teams have designed and produced nearly 60 Victory models that have been honored with 25 of the industry’s top awards.

“The experience, knowledge, infrastructure and capability we’ve built in those 18 years gave us the confidence to acquire and develop the Indian Motorcycle brand, so I would like to express my gratitude to everyone associated with Victory Motorcycles and celebrate your many contributions.”

According to the release, there were several factors involved in the decision, including the brand’s struggle to establish the market share needed to be successful and profitable. Polaris said it will assist dealers in liquidating existing inventories while continuing to supply parts for a period of 10 years, along with providing service and warranty coverage to Victory dealers and owners.

In a statement to Drag Illustrated, Sampey said:

“There have been a lot of questions regarding the Victory announcement this morning, but Team Liberty Racing is still moving forward with the same plans as before the announcement. We will be working diligently to have two Victory motorcycles and S&S motors ready for competition at the Gatornationals.”

The NHRA Mello Yello Series Pro Stock Motorcycle season kicks off March 16-19 at Gainesville Raceway for the Amalie Motor Oil Gatornationals. Requests for a comment from Smith were not answered as of press time.