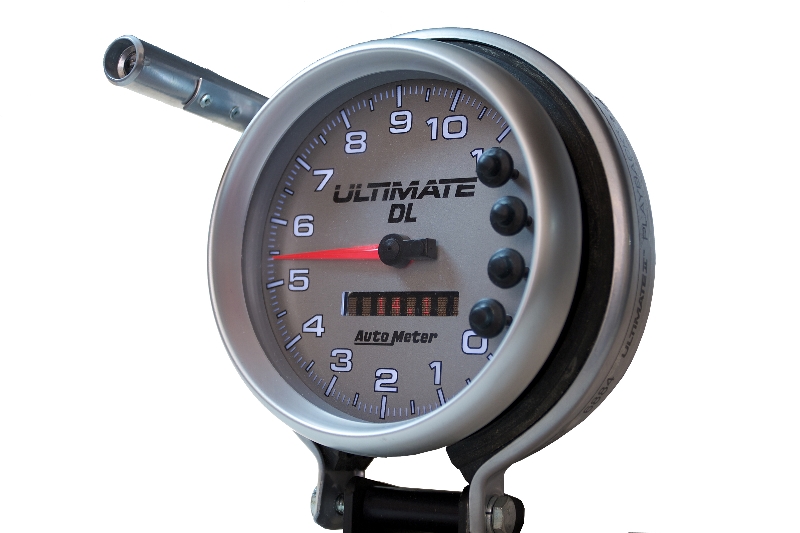 The Ultimate DL tachometer from Auto Meter Precision Instruments meets the growing data acquisition needs of competitive sportsman drag racers, without the costs typically associated with dedicated onboard data recording computers. On the surface, the Ultimate DL looks like a typical tachometer: a 5” diameter gauge featuring the typical Auto Meter black or silver face functions like any other Auto Meter tach. In addition, the Ultimate DL includes monitoring and recording features that were previously available exclusively on purpose-built data acquisition systems.

The Auto Meter Ultimate DL is a dual-channel tachometer capable of recording and displaying engine or driveshaft RPM. The unit offers up to 60 seconds of recording time and can store data from up to 4 separate passes. In addition to engine and driveshaft RPM, the Ultimate DL features a wideband 02 Air/Fuel mixture channel, a user-defined pressure channel, and a 3-axis G-meter; all with the same recording functions. After recording a run, racers can playback their data on the face of the tach itself, and/or download the run with Auto Meter’s Data Pro software. Successful competitors across the nation are already singing the praises of the Ultimate DL.

“I’ve used the Auto Meter MFDL with STACK technology for several years in my NHRA Super Comp and Super Gas cars,” explained 2-time NHRA world champion Luke Bogacki who recently installed the Ultimate DL in his team’s bracket machines. “With the MFDL I can learn more in one run than I could in 50 runs prior to having that recording and analyzing capability. In our MFDL equipped cars, I have an incredible amount of data at my fingertips, but to be honest I spend the most time reviewing three key measurements: engine rpm, driveshaft rpm in relation to the G-meter, and the 02 sensor. With the new Ultimate DL tachometer, we can now monitor those critical functions with the same precision, using the same software; and it’s available at a fraction of the price.”

Racers who prefer the simplicity of a playback tachometer can playback runs directly on the face of the Ultimate DL: engine or driveshaft RPM is displayed by the tach needle, while the digital readout of the gauge can be used to monitor the pressure, 02, or G-meter channels. Racers who enjoy the precision of Auto Meter’s Data Pro software can download runs to a computer using a common USB connection.

The pressure channel of the Auto Meter Ultimate DL is user defined, meaning that racers can choose one of a variety of functions to monitor: oil pressure, fuel pressure, nitrous pressure, etc. The pressure channel not only allows racers to monitor and record a pressure function, it also eliminates the need for additional gauges in the cockpit.
“The Auto Meter Ultimate DL is the most user friendly tach we have ever owned,” concluded 2-time NHRA national event winner Michelle Furr. “It’s easy to hook up. It’s easy to use. It’s less expensive than going the route a full-fledged data recorder. You can download if you want, and choose the runs you want, while still using it as a regular tachometer. Auto Meter is the only gauges we use from our race cars to our ‘57 Chevy. The Ultimate DL is just one more example of a great company creating an affordable product for sportsman racers to get the information we need for optimal performance.”