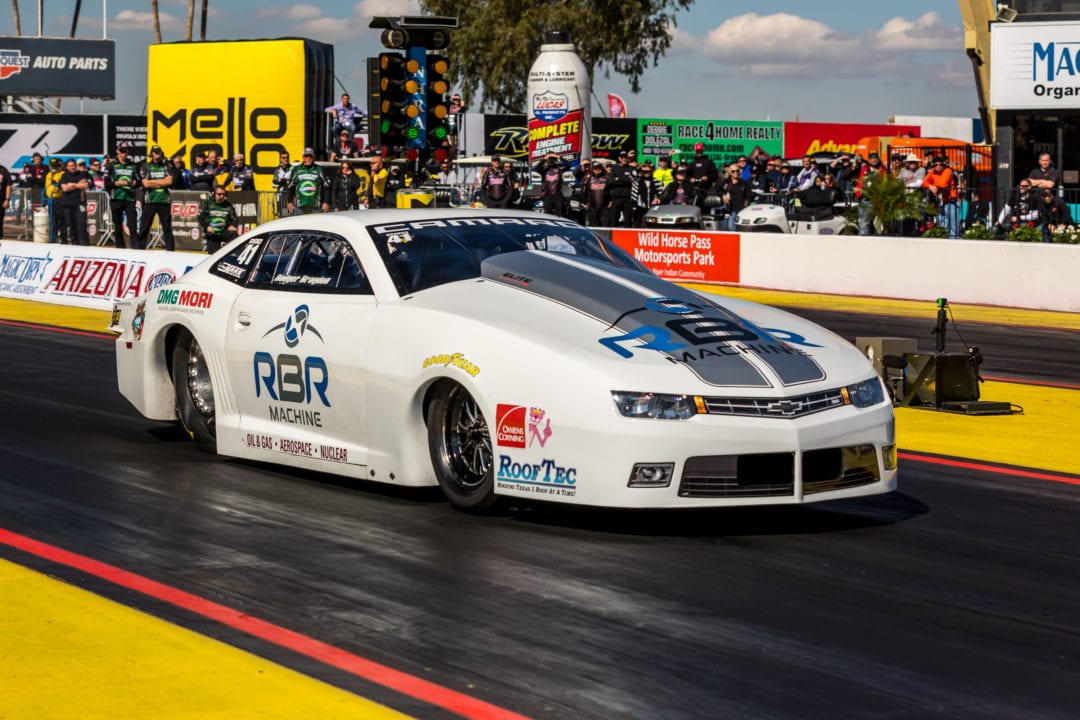 It was a strong step forward for Rodger Brogdon this weekend at the Magic Dry Organic Absorbent NHRA Nationals in Phoenix, but the Pro Stock veteran was also left wanting more after not performing like he wanted on the starting line.

Brogdon picked up his first round win of the year, but fell a round later to Matt Hartford despite an impressive 6.538 at 211.73 mph from Brogdon in his RBR Machine Chevrolet Camaro.

Hartford won the battle on the starting line and held off a hard-charging Brogdon by a mere six inches en route to a runner-up finish.

“We had a really fast car, I just have to learn how to get my foot off the pedal again,” said Brogdon, who is currently eighth in Pro Stock points. “I was late both rounds and I knew it. I was able to get around (Fernando Cuadra) in the first round and just ran out of track in the second round. We’ve got a really good car and I just have to start doing better on the starting line.”

With a return to full-time racing, that should come around quickly for Brogdon, who was the No. 1 qualifier in Pomona and followed that with a solid 6.538 at 210.90 to qualify fifth in Phoenix.

He went around Cuadra with a 6.544 at 211.53 in the first round, but Brogdon wasn’t satisfied with his reaction times during eliminations in Phoenix. That will be a focus heading into the NHRA Gatornationals next month, especially as Brogdon continues to be extremely pleased with how things have come together with the Elite Motorsports team and his Camaro.

“I really think I’ve got one of the top 2-3 fastest cars, so that’s not the issue,” Brogdon said. “I did a decent job on the tree during qualifying, but that’s something I have to work on. I feel like I’m doing a good job driving the car, I just have to work on getting my foot off the pedal. But we’ll get it eventually, and hopefully at the next race.”

With the reduced 18-race schedule during the 2019 NHRA season, 10 races now remain before the start of the Countdown to the Championship. That gives Brogdon time to make amends, but he’s ready to take advantage of having a strong car and strong team immediately.

All five Elite Motorsports cars advanced to the second round, while Hartford, Erica Enders and eventual winner Jeg Coughlin Jr. all advanced to the semifinals. Brogdon wants to be the next to do and grab his first victory since 2015, and he’ll get that opportunity in Gainesville, where he has a previous Competition Eliminator win.

“Overall, things are good,” said Brogdon, who has three career Pro Stock wins. “I’ve got a bunch of good guys on my team, a great crew chief and I’m in a very good situation. I’m fortunate to be in it and I know we’ll be there before long.”