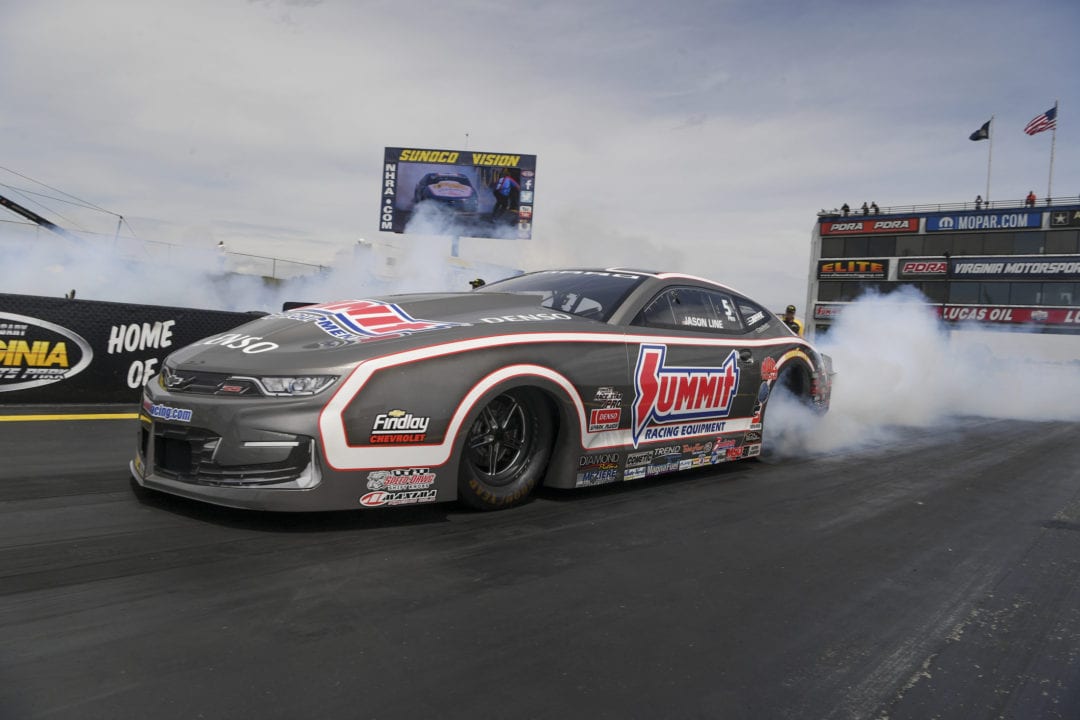 Jason Line has watched his KB Racing teammates succeed repeatedly to open the 2019 NHRA Mello Yello Drag Racing Series season. But headed to one of the most important races of the season, Pro Stock standout Jason Line is ready for that momentum to start swinging his way, especially at this weekend’s 13th annual Summit Racing Equipment NHRA Nationals at Summit Racing Equipment Motorsports Park.

Performing well in Norwalk is of utmost importance for Line and his Summit Racing Equipment teammate Greg Anderson, and Line is ready to unleash his Chevrolet Camaro after a two-week break during the new 18-race Pro Stock schedule in 2019. Line has advanced to two final rounds this year, but there haven’t been as many highlights as he’s hoped for, something he’s determined to change this weekend in Norwalk.

“I feel like all the KB cars are running well, but the two Summit cars, we’ve not had the success we want,” said Line, who is fourth in Pro Stock points. “Hopefully we can get one of the two in the winner’s circle this weekend. We’re ready to do it and both cars are getting close. This would be an opportune time, that’s for sure. We’ve got a lot of racing ahead and we’re looking forward to getting back out there. This track has been good to us, so hopefully we can have some more success.”

Blake Alexander (Top Fuel), Matt Hagan (Funny Car), Tanner Gray (Pro Stock) and Eddie Krawiec (Pro Stock Motorcycle) were last year’s winners of an event that will be televised on FOX Sports 1, including final eliminations coverage starting at 6:30 p.m. (ET) on Sunday, June 23. It is the seventh of 18 races during the 2019 Pro Stock season, and Line will try for his first win of the 2019 season and third overall at Summit Racing Equipment Motorsports Park.

Anderson has three to lead Pro Stock, but this season has belonged to KB Racing teammate Bo Butner, who has four wins this year. Deric Kramer added another Wally to the stable at the most recent Pro Stock race in Chicago, and Line is looking for some of that action. He has seen glimpses, but the success hasn’t been on the level Line has wanted through the first six races. He’s been a top-two qualifier the last two races, which gives Line something to build on in Norwalk.

“We need a little bit of momentum,” Line said. “We need to get things to start rolling and good things to start happening. If you win the championship, nobody will remember the struggles at the start of the season. The start of the year hasn’t been what I hoped, but you can make all that go away if you start running well now. All of these cars in the class are so evenly-matched. It’s tough and you’ve got to be mistake-free out there.”

That’s because Line has to race against all his teammates, plus the likes of two-time world champion Erica Enders, Alex Laughlin and five-time world champ Jeg Coughlin Jr. But Line knows there’s something special about racing in Norwalk. His week is filled with Summit-related activities, immediately building the excitement for the event. Line doesn’t mind the extra pressure and he’s simply looking to break through on Sunday.

“You want to do well in front of your sponsors, that’s for sure,” Line said. “You don’t really have to try to do anything different, but I’ve got to get better and being focused and staying focused. The Bader family does a heck of a job. I love coming here and I would like to get another one of those ice cream scoops (given to the winners).”