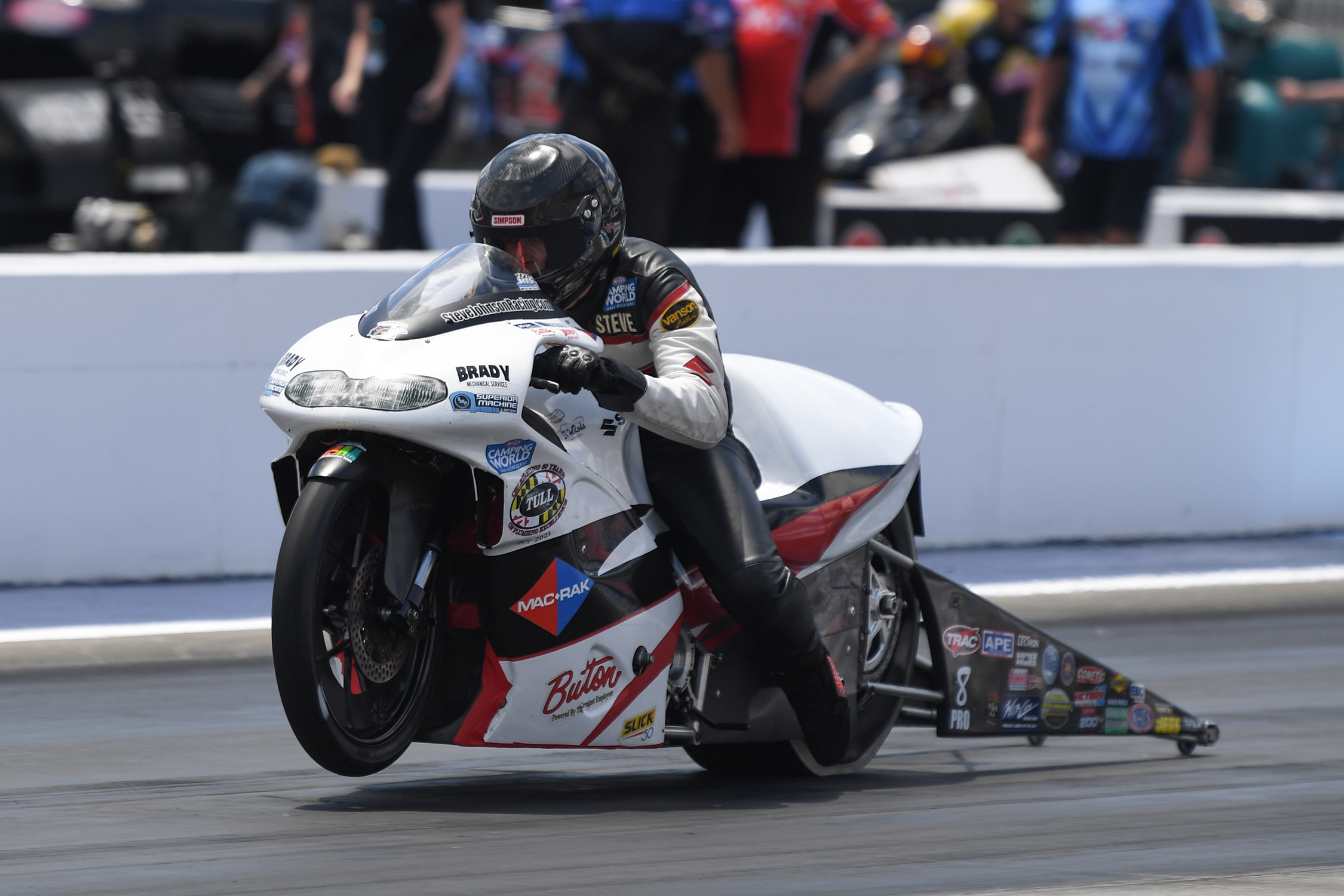 It’s been more than five weeks since the Pro Stock Motorcycle class last raced, and Steve Johnson still hasn’t stopped celebrating. The class returns this weekend for the Summit Racing Equipment NHRA Nationals at Summit Racing Equipment Motorsports Park and Johnson will look to keep rolling after picking up the victory at the most recent race for the class.

It was the first victory in more than seven years for the veteran and he did it in style on his Slick 50 Suzuki, setting the track record and making the quickest pass on a Suzuki in Pro Stock Motorcycle history. The new four-valve Suzuki has already shown impressive potential and now Johnson will have a chance to pick up where he left off when he heads to Norwalk this weekend.

“I wanted to celebrate for another five weeks,” Johnson said. “We’re trying to learn all this stuff on this Suzuki, and it’s been fascinating. We’ve worked our butts off, but when you have success, you have to recognize it and celebrate it. I’m really, really happy and that win was the most important and satisfying win of my career. My team and I definitely want to get back out there and do as good as we can. This is really exciting and it’s been a lot of fun.”

Steve Torrence (Top Fuel), Bob Tasca III (Funny Car), Chris McGaha (Pro Stock), and Andrew Hines (Pro Stock Motorcycle) were winners at the 2019 event. This year’s race will be televised on FOX Sports 1 and FOX, including live final eliminations coverage starting at 2:00 p.m. (ET) on FOX on Sunday, June 27. It is the seventh race of the 2021 NHRA season and the fifth for the riders in the two-wheeled category.

Johnson has experienced a career renaissance on the new Suzuki, advancing to a pair of final rounds and winning in Charlotte. It has him third in points and he senses plenty of excitement brewing for this weekend’s race in Norwalk. The huge fanbase is hungry for NHRA racing for the first time since 2019 and Johnson hopes to stay on the winning track against a talent-filled Pro Stock Motorcycle class that includes points leader and defending champ Matt Smith, five-time event winner Andrew Hines, Scotty Pollacheck, Angelle Sampey, Scotty Pollacheck, Eddie Krawiec, Angie Smith and Ryan Oehler.

“We’re excited about this race. It’s fun to run in the summer when it’s so challenging, plus we get to eat ice cream there,” Johnson said. “The Bader family is great, and this race is so important for us. We’ve seen incredible fan participation and crowds at these last couple of races, and I truly believe Ohio and Norwalk is going to be even bigger. We’re focused on getting out there and doing well in Norwalk.”

In Pro Stock, Aaron Stanfield is riding high after picking up the win in Epping, heading to Norwalk second in points in his Janac Brothers Chevrolet Camaro. If that’s not enough excitement, the young standout is set to make his first appearance at the track and he’s looking to make an immediate impression. Stanfield earned his first career win in the class a year ago and has shown all the merits of a championship contender, already advancing to two final rounds in 2021.

“We are excited to get to Norwalk and compete this weekend,” Stanfield said. “It’s a great race track with great fans. I will be racing my Elite (Motorsports)-powered Pro Stock car and my (Constant Aviation) Factory Stock hot rod, and we would like to keep the momentum rolling. This is my first Pro Stock race in Norwalk and I am looking forward to seeing what my team and I can accomplish.”

Top Fuel’s Torrence will look for continued success at the facility and extend his sizable points lead in the process. There are plenty others capable of pulling off the victory as well, including Antron Brown, Doug Kalitta, Gainesville winner Josh Hart, Shawn Langdon, Leah Pruett, Billy Torrence and Clay Millican.

Funny Car’s John Force has two victories in the past three races, with his teammate Robert Hight winning the other during that span. John Force Racing will look for its fourth straight win in 2021, but will be challenged by points leader Bob Tasca III, J.R. Todd, Tim Wilkerson, Ron Capps and Matt Hagan.

The E3 Spark Plugs NHRA Pro Mod Drag Racing Series presented by J&A Service makes its fourth appearance of the 2021 season in Norwalk. Khalid alBalooshi is the defending event winner. The event also features thrilling competition in the NHRA Lucas Oil Drag Racing Series, showcasing the future stars of the sport, as well as the Constant Aviation Factory Stock Showdown class. After a must-see nitro qualifying session under the lights on Friday, fans can enjoy the amazing jet-powered Kenworth truck driven by Bob Motz and a spectacular firework show to end the night.

The event also includes a special display and exhibition passes from the popular ScottRods AA/Gassers and Nostalgia Pro Stock Association as well. The cars will make a number of runs during the weekend and will also be displayed on the midway.

As always, fans are granted an exclusive pit pass to the most powerful and sensory-filled motorsports attraction on the planet. This unique opportunity gives fans a chance to see teams in action and service their hot rods between rounds.

To purchase general admission or reserved seats, visit www.summitmotorsportspark.com. Kids 12 and under are free in general admission areas with a paid adult. A select number of camping spots are also available for purchase. The track has more than 900 camping spots for the weekend and only a very limited number remain for the race. For more information about the NHRA visit www.NHRA.com.