After a six-week layoff, Pro Stock is back and Erica Enders couldn’t be more excited. That the class is returning at Virginia Motorsports Park, the site of this weekend’s Virginia NHRA Nationals, makes it even better for the two-time world champion.

The NHRA returned to the facility last year for the first time in nearly a decade, wowing every competitor and fan that entered the gates. It has Enders eager to be back in a Melling Performance/Elite Motorsports Camaro she hasn’t campaigned since early April with Pro Stock’s new 18-race schedule.

“I don’t think I’ve ever been out of the Pro Stock car this long,” Enders said. “I’m excited and anxious to get back at it. I love going back to Richmond. The Franklin family (who own the track), they’re racers and they get it. The way they treat people from the time you pull in, it all shows how much it matters to them. I’m excited to go back and I know how awesome that track surface is.”

She’ll also be greeted by a legion of Pro Stock fans that packed the facility a year ago, something that wasn’t lost on Enders, who currently sits fifth in Pro Stock points and ninth in Pro Mod points through four races in each class.

“On the East Coast, there’s more Pro Stock fans and that definitely shows,” said Enders, who has 23 career wins. “There’s a lot of excitement in the pits and it’s always packed. I can appreciate that passion.”

It has Enders motivated for a big weekend, especially as the team looks to turn the corner in Pro Stock. It will be another double-duty weekend, as Enders will also race in Pro Mod, but after making considerable strides on that side the past three races, she’ll look to make a similar jump in Pro Stock.

Her Pro Stock year – which includes a pair of semifinal appearances – hasn’t been bad, but Enders is ready to make a major move and come up with her first win of 2019. She sees the potential and now it’s time to take advantage.

“We have to start seeing consistent round wins, get our act together on raceday and start racing like the championship-caliber team we are,” Enders said. “We haven’t done that yet with Team Red and we need to see it out of this Melling Performance Camaro.
“I’m ready to get back on my ‘A’ game. I want to see consistent round wins and leave nothing on the table. We’re all very, very capable of that and it’s just a matter of everything coming together. But it takes everybody being on their ‘A’ game. We can’t let round wins slip through our fingers.”

That urgency has been evident leading up to this weekend, and Enders like the energy she has seen from the Elite Motorsports team, which includes crew chiefs Rick Jones and Mark Ingersoll.
There will be plenty of visualization in the car leading into a hectic weekend in both classes, but Enders prides herself on being able to perform in frenetic situations.

“I’ve worked really hard to become a versatile driver,” Enders said. “With Pro Mod running right before Pro Stock, you get in the car in a rushed, pressure situation and it’s up to me to do my job without making mistakes. But that double-duty, I live for it. I like the pressure, and I’m ready for the hustle and bustle.”

Mello Yello Drag Racing Series qualifying will feature two rounds at 1:45 and 5:00 p.m. on Friday and the final two rounds of qualifying at 12:45 and 3:45 p.m. on Saturday. Final eliminations are scheduled for 12 p.m. on Sunday.

The first of four E3 Spark Plugs NHRA Pro Mod Drag Racing Series qualifying sessions takes place at 1:15 p.m. and 4:30 p.m. on Friday, and the final two rounds of qualifying take place on Saturday at 12:15 and 3:15 p.m. The first round of Pro Mod eliminations are scheduled for 1:30 p.m. on Sunday. 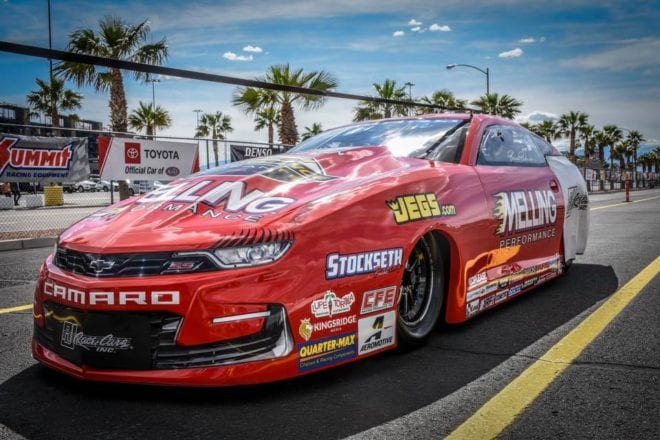