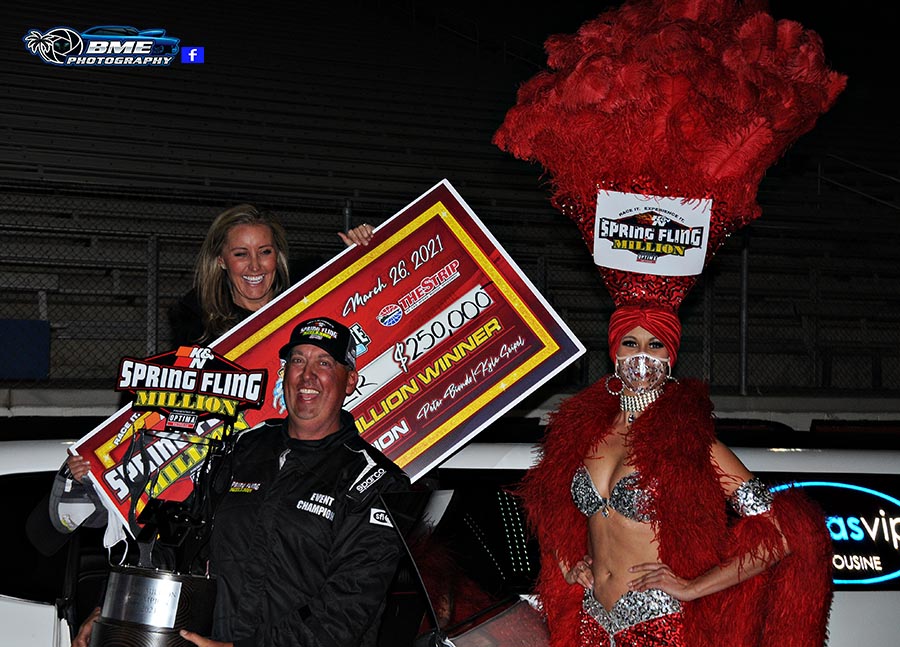 Day number four at the K&N Spring Fling Million presented by Optima Batteries began with the Brodix Run For The $50,000. Racers took their best shot at laying down a perfect package which would earn them a $50,000 payday.

With the Brodix Run For The $50K complete, racing moved into Million Dollar Friday at the K&N Spring Fling Million. Two hundred and thirty-one competitors entered the Million main event which set the winner’s purse at $250,000.

The fields in both Gearwrench Pro and Super Pro included a who’s who of bracket racers from over 30 states. The Pro field was absolutely brutal as the small field of twenty-two racers were some of the best in the country. As an example, the opening pair of the Spring Fling Million saw Kyle Rizzoli and Nick Hastings square off. In that pairing both drivers were .00x with Rizzoli sending Hastings to the buyback window.

As the day progressed, racer’s million-dollar dreams were crushed as they fell from competition while those remaining chased fame and fortune. Going into round five, only three Gearwrench Pro drivers remained while there were twenty racers left in Super Pro.

The remaining twelve racers met in the lanes for round six and quickly worked out an equitable split. Once the payout was determined, Nick Hastings and Justin Lamb squared off in the Gearwrench Pro class final. Lamb missed the tree for the first time all day sending Hastings to the quarterfinals. Hastings also collected the $500 Gearwrench Pro bonus.

Round six of Super Pro saw Shane Carr fall to Matt Lee by virtue of a -.003 red-light. Alexis Thompson advanced when Jon Corbin was -.003 too quick in his ’68 Camaro. Hunter Patton turned it red to advance Val Torres Jr. and Peeps Pennington did the same against Bo Butner. Kris Whitfield used a .009-pack to stop AJ Ashe and his Grand Am.

The quarterfinals included five dragsters and the lone door car of Nick Hastings. Nick’s Mustang was sporting a damaged rear bumper from an off-track accident a couple of rounds earlier. Leaving off the bottom, Hastings was .006 to Butner’s .003 at six cars. At the stripe, Bo got there first by .001 to earn a bye to the Spring Fling Million final round.

With Butner holding the bye run by virtue of his .003 reaction, Whitfield and Torres would meet in the semifinals. In the round of three, Kris Whitfield earned his spot in the Million final after his .017 one above two effort stopped Torres. Speaking of stopping, Torres parked it at the stripe to go .025 over after letting go .025 in the loss.

This setup up a great matchup for the K&N Spring Fling Million final round. Bo Butner, better known for NHRA Pro Stock and NHRA Class racing, was looking to add a big dollar bracket race win to his resume. Whitfield, a 17-time track champion at Bandimere Speedway and NHRA Super class star, was looking to fulfill his dreams of winning the Million.

After a brief discussion of the final round payouts, both drivers suited up for their first Spring Fling Million final. In the first all-dragster final round of the week, Bo Butner would etch his name in the history books when Whitfield missed the tree. Butner posted a .013 dead on three lap (4.533) that more than covered Whitfield’s .034 reaction and -.003 under 4.646 effort.

After the final, the celebration was on! The winner’s circle was a rowdy bunch as the Butner team celebrated with friends, Vegas showgirls, a limousine, and more. As the party wound down and photos were taken, Bo Butner and crew loaded in the limo and headed to a luxury suite at the Cosmopolitan for the night. In fitting fashion, “We are the Champions” was blaring from the limousine’s speakers! 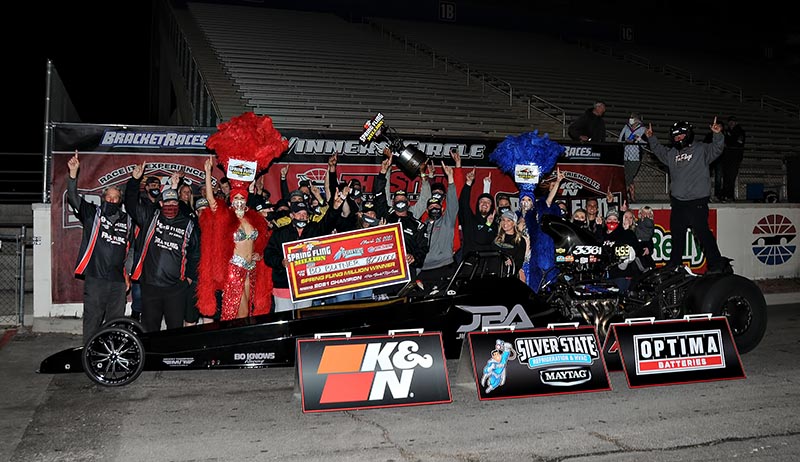 And with that, Million Dollar Friday came to a close but there’s still more racing to come. Racers will have one final shot at glory at the K&N Spring Fling Million with the FTI Performance $30K Saturday. Prior to the $30K, twenty-five randomly chosen racers will compete in the Spring Fling Reaction Time Challenge. Those racers will have the chance to win money by posting a .00x or .000 reaction. In addition, the Fling staff will announce the Todd Barton Design Best Appearing Car award on Saturday.

You can follow all the action from the K&N Spring Fling Million live at www.bangshift.com thanks to JEGS and Hoosier Racing Tire. The Reaction Time Challenge starts at 8.20am with first round of the FTI Performance $30K to follow.