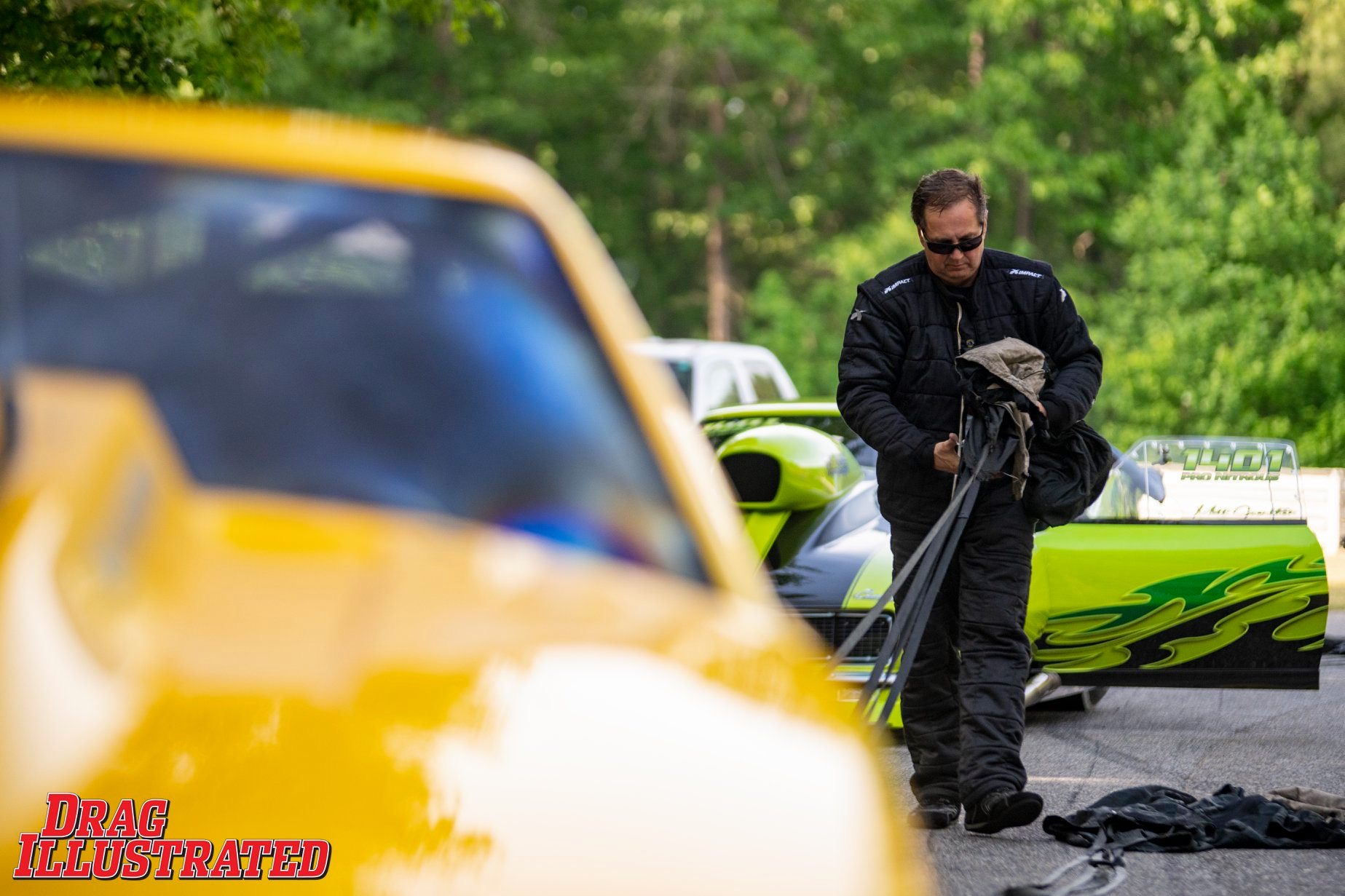 It’s been said that a monster 959ci engine is needed to compete in the PDRA’s Switzer Dynamics Pro Nitrous class. Charles Carpenter, the “Godfather of Pro Modified,” is trying to prove that theory wrong this weekend at the PDRA Carolina Showdown presented by ProCharger. He qualified No. 5 in the 14-car field with a career-best 3.749 at 201.34 in his 908-powered Stevenson Crane ’68 Camaro.

“This is the elite group of nitrous cars anywhere in the country,” Carpenter said. “It’s awesome to come out here and run with these guys and run that well. I love racing with these guys. Like I always tell everybody, I’m too dumb to quit. I just like to do it just a little bit more.”

Carpenter, who made a name for himself racing his legendary ’55 Chevy doorslammers on the Super Chevy Show circuit in the ‘90s, acknowledged the tuning advice he receives from perennial Pro Nitrous favorite Jay Cox.

“I have to give all the credit to Jay Cox,” Carpenter said. “Jay is a big help to me. Ironically, I used to help Jay when he first started. Now he’s helping an old man out here trying to race this car. Jay doesn’t get all the credit he deserves a lot of times. He’s so intense and he knows the ins and outs of it.”

Carpenter recorded the 3.749 during the second qualifying session Friday evening. An issue with the nitrous system prevented him from lowering his career-best number even further during the third and final session.

“I really think that we could’ve probably run a very low .70, maybe even a high .60,” said Carpenter, who ended up running a 3.84. “We had a siphon tube failure in a nitrous bottle. We have them split up. I use five systems. Three systems are on one bottle and two are on another. By the time it got to the third system, the siphon tube undoubtedly had fallen off and the bottle pressure just fell way off. It’s not picking up the liquid then, it’s just going to a gas. So the engine was just rich. It was still pulling, it was still running, but I could tell it just wasn’t the same. I probably shouldn’t have stayed with it, but it didn’t feel like it was laying over to the point of hurting anything.”

The 3.749, along with a soft 3.838 in the warm first session and the hurt 3.84, has Carpenter looking forward to eliminations. He’ll take on Rob Hunnicutt in the first round.

“I feel good – to go a few rounds anyway,” Carpenter said. “It’s going to be hard to get by these heavy hitter guys that can run .60s, but I think we’ve proven here that my little ‘small-block’ 908 is a force to be reckoned with. I’ve got a great car. This Bickel car has been awesome. It’s efficient. It’s very efficient.”

Carpenter offered up his appreciation for the people who help him continue racing at such a high level.

“I always like to thank everyone who chips in and helps with this deal,” said Carpenter, who owns and operates an auto repair shop near Charlotte. “Dan Stevenson and Stevenson Crane, my buddy Paul Albino, and Bruce Nalewajk is with me. Bruce helps me so much in working on this thing during the week at night to get it all together. Of course, all the work that [son] Michael does with us while juggling us in between two kids and Drag Illustrated and everything else he’s got going on. I always appreciate them.”