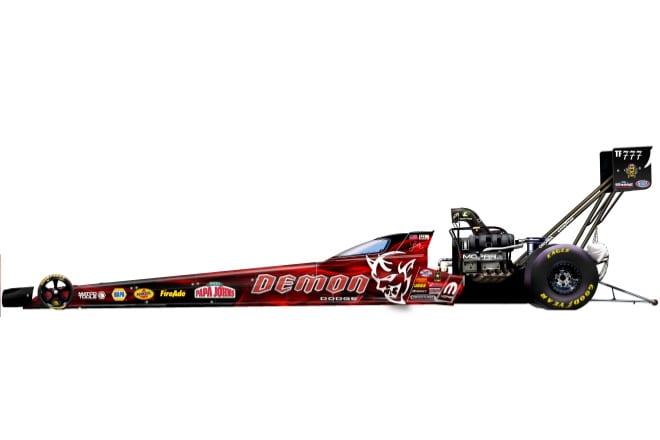 Leah Pritchett will be driving a Mopar HEMI®-powered Demon this weekend in the NHRA New England Nationals, but it won’t one of the coveted 840-horsepower, 21st century muscle cars that are the fastest-ever production vehicles in a quarter-mile.

For the next two weeks, she’ll be in an 11,000-horsepower “Demon” when she joins with Pennzoil to salute the 2018 Dodge Challenger SRT Demon that will be available to the public later this year.

Pritchett’s dragster will carry a special “Demon” paint scheme in the June 2-4 NHRA New England Nationals and the following week at Englishtown, N.J., for the Summernationals. Pritchett’s firesuit and crew shirts will also sport Demon branding.

Pritchett already has been a “demon” to competitors in Top Fuel this year through eight events in the 2017 NHRA Mello Yello Drag Racing Series for Don Schumacher Racing by winning three event titles, setting the world elapsed time record, winning two poles and resting atop the Mello Yello standings after all but one event driving the gold Papa John’s Pizza dragster that will have her ranked No. 1 to start the New England Nationals.

Her DSR dragster and all seven DSR racecars – like the Demon and other new Dodges – are Powered by Pennzoil.

“We get to represent the quickest, non-modified production car with the Demon, and we get to do it on the track in the quickest, modified, non-production car on the planet,” she said of her Top Fueler that holds the quickest run in NHRA history with a time of 3.658 seconds recorded early this year near Phoenix.

“Both are No. 1 in their own right. For our team to be able to represent the Demon lets us pay homage to what Mopar, Dodge and Pennzoil stand for: power, legacy and the future.”

The 29-year-old Southern California native living near Indianapolis has a special affinity for the Demon.

Pritchett was involved in testing the Demon and added her 330-mph touch to its development before the Demon was introduced in April at the New York International Auto Show.

“My role in development of the Demon started at the Englishtown track last year and it will be very cool to see it come full circle when I drive my 330-mph Demon Top Fueler this weekend at Epping and then take it to Englishtown,” she said.

And she won’t have trouble temporarily adjusting from her gold Papa John’s dragster to the black and red Demon dragster for two weeks.

“The gold is in the heart of our entire team, but this new dragster will bring out our inner demon.”