It was announced today (Sep. 23) that the NHRA has named Precision Turbo & Engine, the leader in turbocharger technology for street and race applications, as presenting sponsor for the NHRA Pro Mod Drag Racing Series event at the AAA Insurance NHRA Midwest Nationals, Sept. 26-28 at Gateway Motorsports Park in Madison, Ill. It is the ninth of 10 races in the NHRA Pro Mod Drag Racing Series. 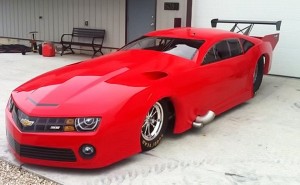 “This is a historical partnership between NHRA and the Real Pro Mod Association and we are working towards a common goal of ensuring the longevity and prosperity of Pro Mod racing,” said PTE president and owner Harry Hruska. “Precision Turbo & Engine’s sponsorship of the St. Louis Pro Mod race is just one of the many ways our company is showing its commitment to supporting this great class.”

Featuring the world’s fastest and most unique doorslammer race cars, the NHRA Pro Mod Drag Racing Series offers something for every kind of hot-rodding enthusiast. The growing class is highlighted by historic muscle cars like,’67 Mustangs and ’68 Firebirds and ’69 Camaros, as well as a variety of newer American muscle cars. With more than 3,000 horsepower, the suspended door pro mod cars travel the quarter-mile in less than six seconds at speeds exceeding 250 mph.

PTE will also be giving away collectable bobble heads of Don Walsh Jr. and the new Precision Turbo Pro Mod ’14 Chevy Camaro. Fans can claim their free bobblehead on Thursday, Sept. 25 between 6-8 p.m. at the FanFest at the Ballpark Village off Clark Street in downtown St. Louis. Fans will also have the opportunity to pick a bobblehead up as they leave the track following the final nitro qualifying run on Friday and following the final pair of Pro Mod cars Saturday.

The 2014 NHRA Pro Mod Drag Racing Series, whose race and championship purses are powered by Speedtech, competes during a 10-race schedule, with each event televised on the Velocity Channel. The season kicked off at the Amalie Motor Oil NHRA Gatornationals with Mike Castellana taking the opening victory over 2013 series champion Rickie Smith. Mike Janis took the second race of the season at the O’Reilly Auto Parts NHRA SpringNationals, defeating Castellana in the final. Rickie Smith defeated Von Smith to win the third race of the season at the Summit Racing Equipment NHRA Southern Nationals.

Each race will air in a half-hour show on the Velocity Channel, which launched in October and is owned by the Discovery Network. The shows, produced by Masters Entertainment Group, will air during 10 consecutive weeks in the fourth quarter of 2014.