It’s hard not to think of the big picture with only two races remaining in the NHRA Countdown to the Championship but the focus for Matt Hagan and the Mopar Express Lane Funny Car team is narrow. Hagan takes a 36-point lead in his hunt for a second NHRA world championship into this weekend’s NHRA Nationals at The Strip at Las Vegas Motor Speedway, the penultimate event in NHRA’s 24-race Mello Yello Drag Racing Series season. 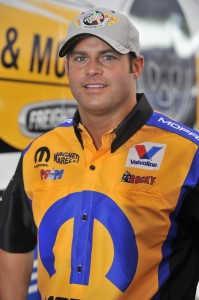 The first task for the team led by crew chief Dickie Venables and assistant Michael Knudsen is to get the 10,000-horsepower Dodge Charger R/T qualified in the top half of the 16-car field for Sunday’s eliminations. Then the team will focus on a race day set up.

“We have to take it one lap at a time and not get ahead of ourselves,” Hagan said. “It’s important to go out there on Friday and get our weekend started off right and make a good, solid lap.

“Dickie is so focused on our team and our car right now. These guys are hungry, they have a lot to prove. Dickie always has great game plan and he’s a smart racer. I have all of the confidence in the world in him and my guys and me as a driver. I can’t wait to crawl back into my race car.”

After a three-week break in the Countdown to the Championship, Hagan just wants to get back to the track and try to get momentum going again. 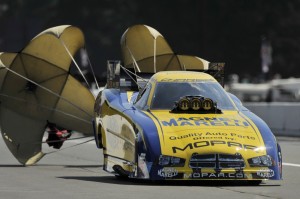 “We’re in the middle of this championship battle and it started off really well for us and then we took a break,” he said of the team winning two of the past four titles. “I know I’m ready to get back to racing and my guys are too. We had great momentum going so we’re looking to get that back.”

The Mopar team has a round win-loss record of 12-2 through four races in the Countdown to the Championship and a 33-19 record through 22 races this season. Matt has two runner-up finishes (2010, 2009) at the Las Vegas facility but has never won an event title there.

“We started off this Countdown real strong. With two wins and a runner-up in three out of four races so we are on a roll. To be honest, there’s not that much pressure on us. Everyone expects John (Force, who is second in points) to win this thing. We just have to go out there and do our thing and not worry about anyone else. We have the team that is capable of doing that.