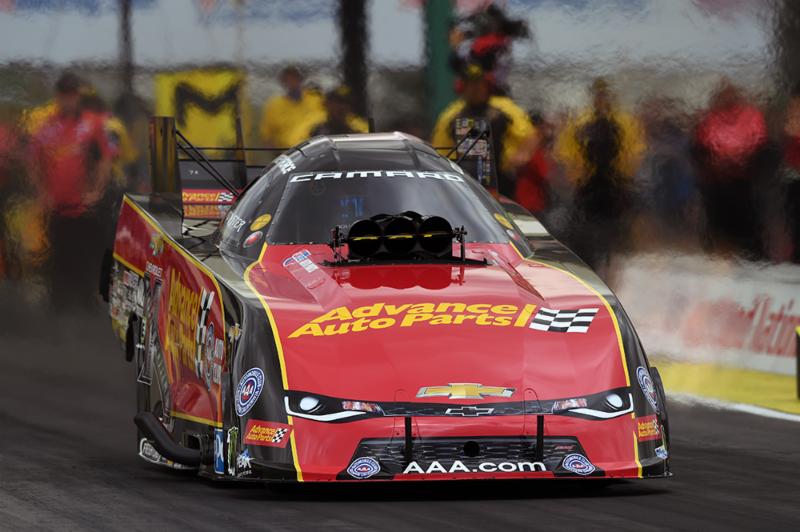 The hottest driver on the NHRA Mello Yello Drag Racing Series is heading to Chicago with momentum and an exciting new teammate. Courtney Force, the current Funny Car points leader and three-time winner in 2018, will be joined by sister and Top Fuel world champion Brittany Force in representing Advance Auto Parts this weekend at the JEGS Route 66 NHRA Nationals outside of Chicago.

“I am so excited Brittany and I will both be in red Advance Auto Parts race cars this weekend,” said Courtney Force. “We don’t get to race in the same class so this is a fun opportunity for us to do something together. We have been No. 1 qualifiers together and we have had the chance to double up on wins, we can hope we can seal the deal in our matching Advance Auto Parts cars.”

Another win for Force would give her three in a row for the first time in her historic career. She is coming off wins in Atlanta and Topeka heading into Chicago. Both of those wins have come from the No. 1 qualifier spot. At the second race of 2018 in Arizona Force picked up her first Wally of 2018 also from the No. 1 spot.

So far this season Force and her Advance Auto Parts Chevrolet Camaro team have been the best Funny Car in a tough category that has seen veteran drivers step up and new faces get wins. Tough competitors, like teammate Robert Hight in the Auto Club Camaro, are right on Force’s heels when it comes to performance. The competition just motivates Force, an eleven-time Funny Car winner.

“The Funny Car class is extremely competitive. Every diver and every team bring a lot to the table which pushes our team that much harder,” explained Force. “The competition level has never been higher and you have to be at the top of your game throughout qualifying and especially on race day. That’s what has made NHRA so great, how close these races are won and lost. I have learned a lot from my teammates and the support I get from my Advance Auto Parts team is incredible. They really push me to go out there and try my hardest on every pass.”

This past weekend Force was in Indianapolis watching her husband IndyCar driver Graham Rahal battle for the Indy 500 crown. The veteran driver in his own right was racing up front and finished 10th while Force watched anxiously from the pits. Earlier this season Force was able to talk with eventual Indy500 winner and fellow Chevrolet driver Will Power when he attended is first NHRA race in Charlotte.

“Graham did an amazing job at the Indy500,” said Force. “I was so proud to watch him drive his way through the field. He and his team did an incredible job throughout the month of May. After the race I read that Will Power said he got some motivation when he came out to an NHRA race which I found very humbling. It’s always great to have a fellow racer out at one of our events especially when we compete in two completely different styles of racing. I took a lot away from watching the Indy 500 and the endurance and the resilience it takes for these men and women to compete in a 500-mile race gets me pumped up to get out there to Chicago and try to make it three wins in a row.”