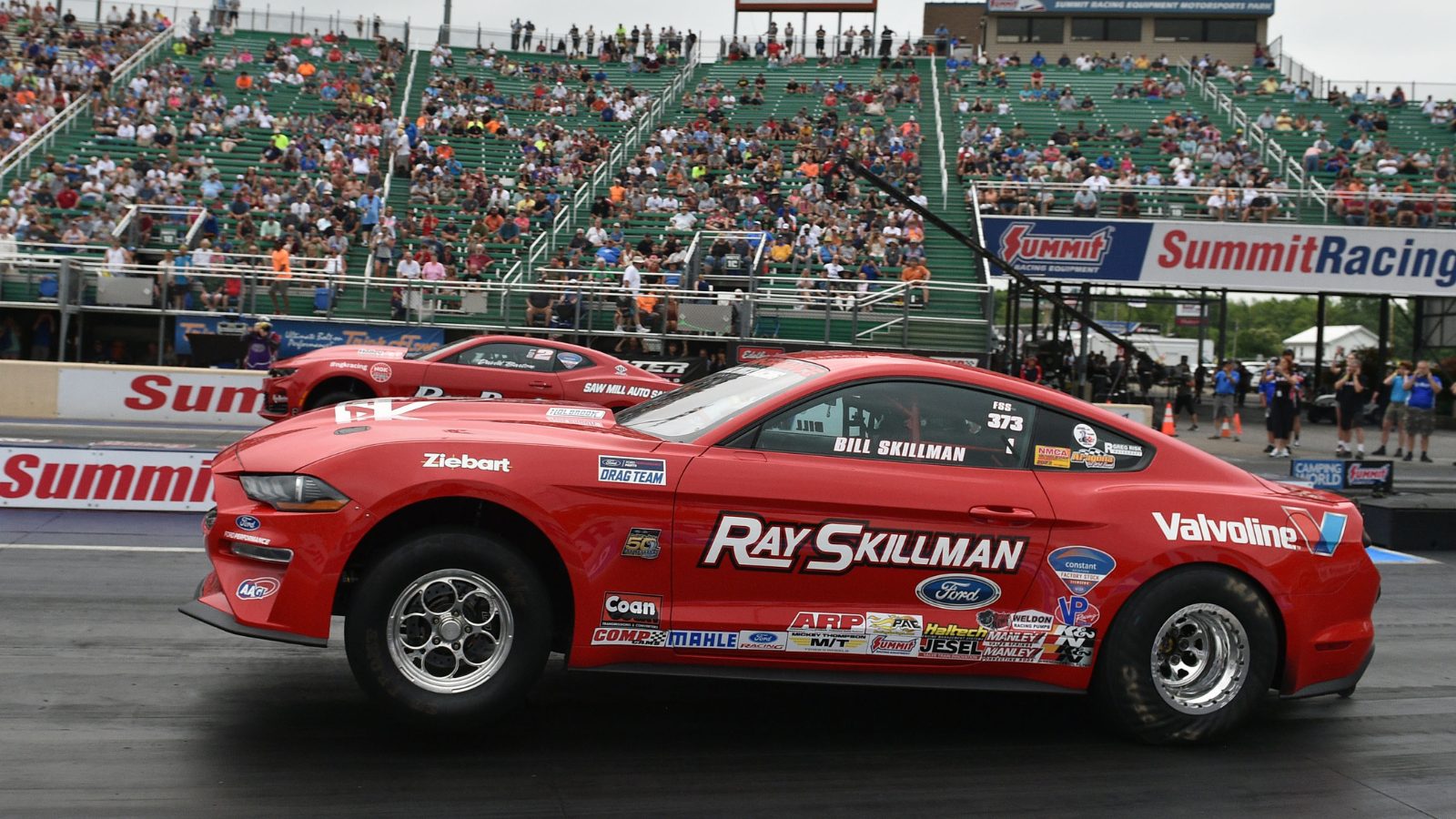 The most prestigious race of the NHRA season, and arguably in all of drag racing, will once again host one of the largest fields of Constant Aviation Factory Stock Showdown competitors. The Dodge Power Brokers NHRA U.S. Nationals at Lucas Oil Indianapolis Raceway Park will feature a 25-car field with two days of eliminations putting the competition between Chevrolet COPO Camaros, Ford Cobra Jets and Dodge Challenger Drag Paks at an all-time high.

Sitting in the points lead with just three events left in the season, Bill Skillman and his Ray Skillman Ford Cobra will be looking for their second consecutive victory at the race coveted as “The Big Go.”

“Three races left in the season including this one, and we’re pretty confident. We got penalized after the last race, second race in a row.  So, we’re working to get power back, changing combinations. We don’t know quite what to expect because we haven’t tested it down a racetrack,” Skillman said. “We’ll have some confidence after a couple runs. We’ll just have to see what the large field looks like. Find out what the performance will be. Putting a car on the dyno doesn’t always show you what happens on the track.”

As the most recent winner Skillman will be carrying the $1,000 bounty on their shoulders when eliminations begin on Sunday thanks to the Constant Aviation Factory Stock Showdown Bounty Program.

“It’s a privilege, having the bounty by having won the last race. The way the bounty works it’s whoever beats you first, not whoever wins the race. It’s good motivation. Nice to have the money out there,” Skillman said. “Can’t win any of it if you’re winning races but it makes it fun. Knock the king off the hill. Expensive class to be in if you want to go fast so it’s a nice bonus.”

“I can’t believe it,” exclaimed Alexandra, moments after his big win. “It was a roller coaster of ups and downs. We just had a great hot rod (in Indy). We have a great team behind us. I must thank my family and David and Ray Barton. All the guys back at the shop working hard for us. It is just crazy that it all came together.”

Aaron Stanfield, handling the Stanfield Racing Engines COPO Camaro, will be feeling double the pressure as he once again will compete in both the Constant Aviation Factory Stock Showdown category as well as the Camping World Drag Racing Series Pro Stock class.

“The U.S. Nationals is the one to win. Our team’s goal is to double up in Constant Aviation Factory Stock Showdown and Pro Stock. We have been working hard to be prepared as possible,” Stanfield said. “Thank you to the Janac Brothers for giving me the opportunity to achieve a big accomplishment like this.”

The Constant Aviation Factory Stock Showdown activities at the Dodge Power Brokers NHRA U.S. Nationals at Lucas Oil Indianapolis Raceway Park will begin with one qualifying pass on Friday at 5:30 p.m., passes on Saturday at 12:15 and 4:00 p.m. and Sunday 11:15 a.m. A wild two days of eliminations begins Sunday at 2:00 p.m. and continues to completion on Monday at 11:15 a.m.