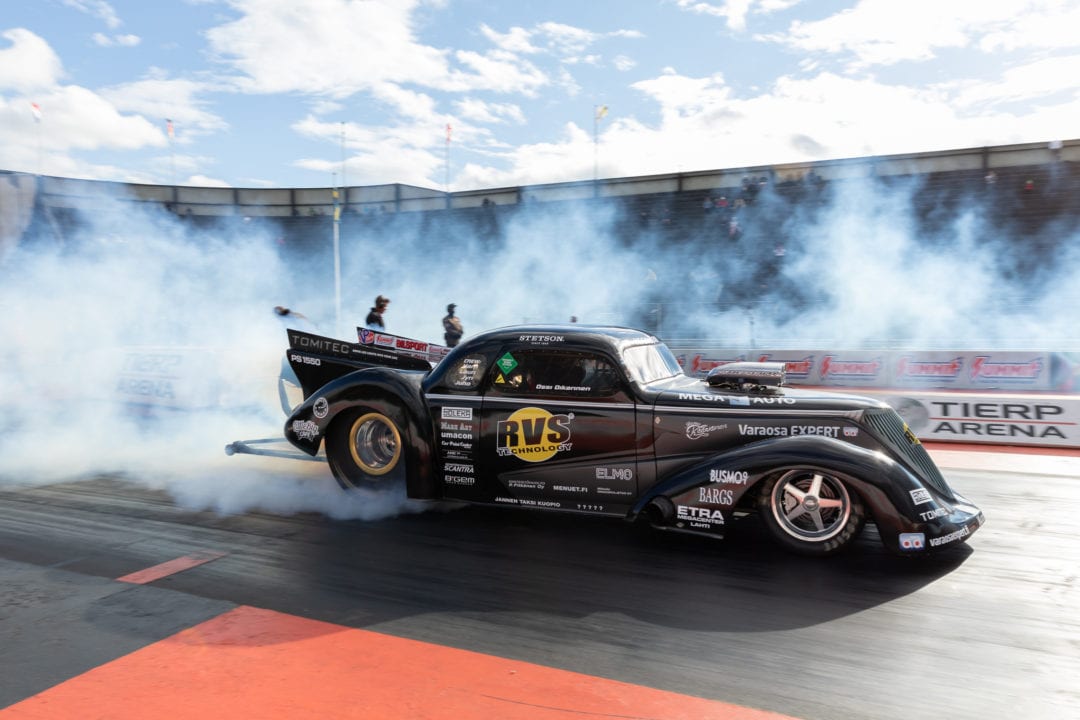 It’s yet another chicken dinner for Finnish Top Fuel queen Anita Mäkelä after she defeated Mike Kågered in the finals of the second round of the FIA Championship. Johnny Lagg was victorious in Top Methanol. Jan Ericsson took the win over David Vegter in Pro Modified, while Jimmy Ålund defeated Michael Malmgren in the final of Pro Stock.

Under beautiful skies with hot temperatures around 90° F, three days of qualifying took place for the second round of the FIA European Drag Racing Championship June 6-9 at the famous Tierp Arena in the heart of beautiful Swedish woods.

During the four rounds of qualifying, lots of the 11 Top Fuel teams entered were plagued by tire shake due to the hot track surface. At the end, Brit Liam Jones stood on his time from the second qualifying session on Friday to become No. 1 with a 3.8914 at 288.51 mph. Main Event Champion Anita Mäkelä was close behind him with a 3.9115 at 300.66 mph and Maja Udtian, who was beyond happy to have posted her first 3.9 run on the boards.

After a series of unfortunate runs when she pitched a blower belt in the Q1, suffered from tire shake in Q2 and Q3 and couldn’t get the car into reverse in Q4, Jndia Erbacher didn’t made the field but was the first alternate for the eliminations in case someone wasn’t going to be able to start. Things weren’t looking much better for teammate Tethys. After he suffered a massive engine malfunction in Q1, he had to skip qualifying round 2 and 3 but still managed to qualify in Q4. 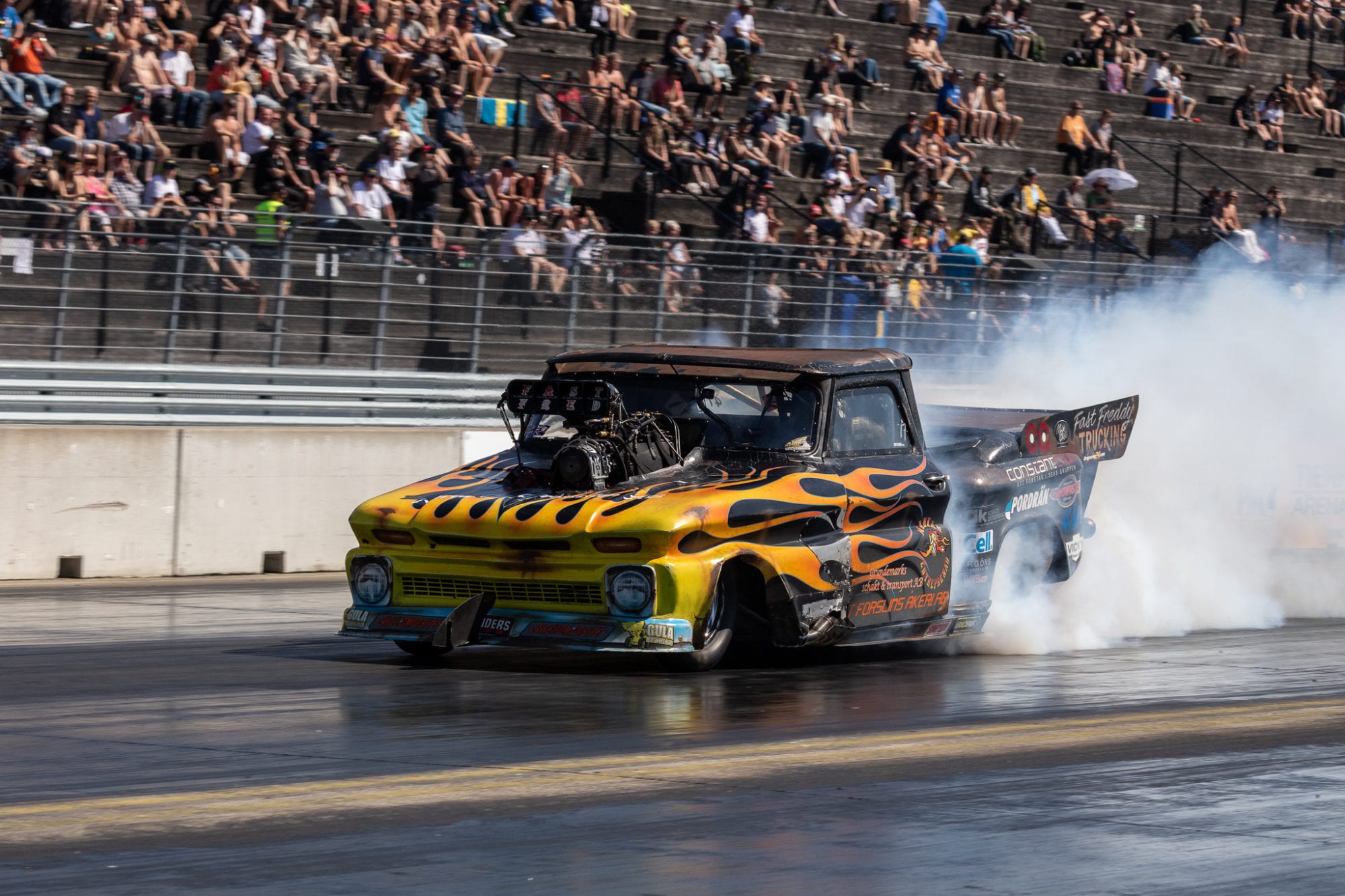 Freddy Fagerström accomplished two personal bests after another in his flame-decorated pickup truck and dropped everyone’s jaws on Sunday with his first-ever 5-second run (5.954 at 237.36mph) in the second round of eliminations, despite losing to an even quicker Andreasson, who ran a 5.789 at 256 mph.

Other highlights were provided by two of the new drivers participating in the rather small European Top Methanol category. One of which was Daniel Jedborn. He’s running a Stig Olson nitro-injected A/Fueler with the help of U.S. tuner Jerry Darien. On his first attempt the burnout looked strong but after he stopped the chutes popped out and he had to shut down the engine. His second attempt was a nice 5.44 run, which he underpinned on Friday with his third attempt where he posted a 5.45 at 255.35 mph. His last run of 5.341 at 263.46 mph even catapulted him to the top of the qualifying ladder.

In the meantime, in the pits the crew of Marcus Perman, who crashed his Pro Mod two weeks before in Santa Pod, was working hard to get the car back together after they rebuilt the front end of their Camaro at their workshop. There was still lots of work to do to get the Camaro race ready.

A couple of race trailers further, another Pro Modified crew was working hard to get their car race ready. After suffering a massive fire at Santa Pod, Russian Dmitry Samorukov’s team managed to return to competition from the third qualifying session on and made it into the field starting from the No. 12 spot. 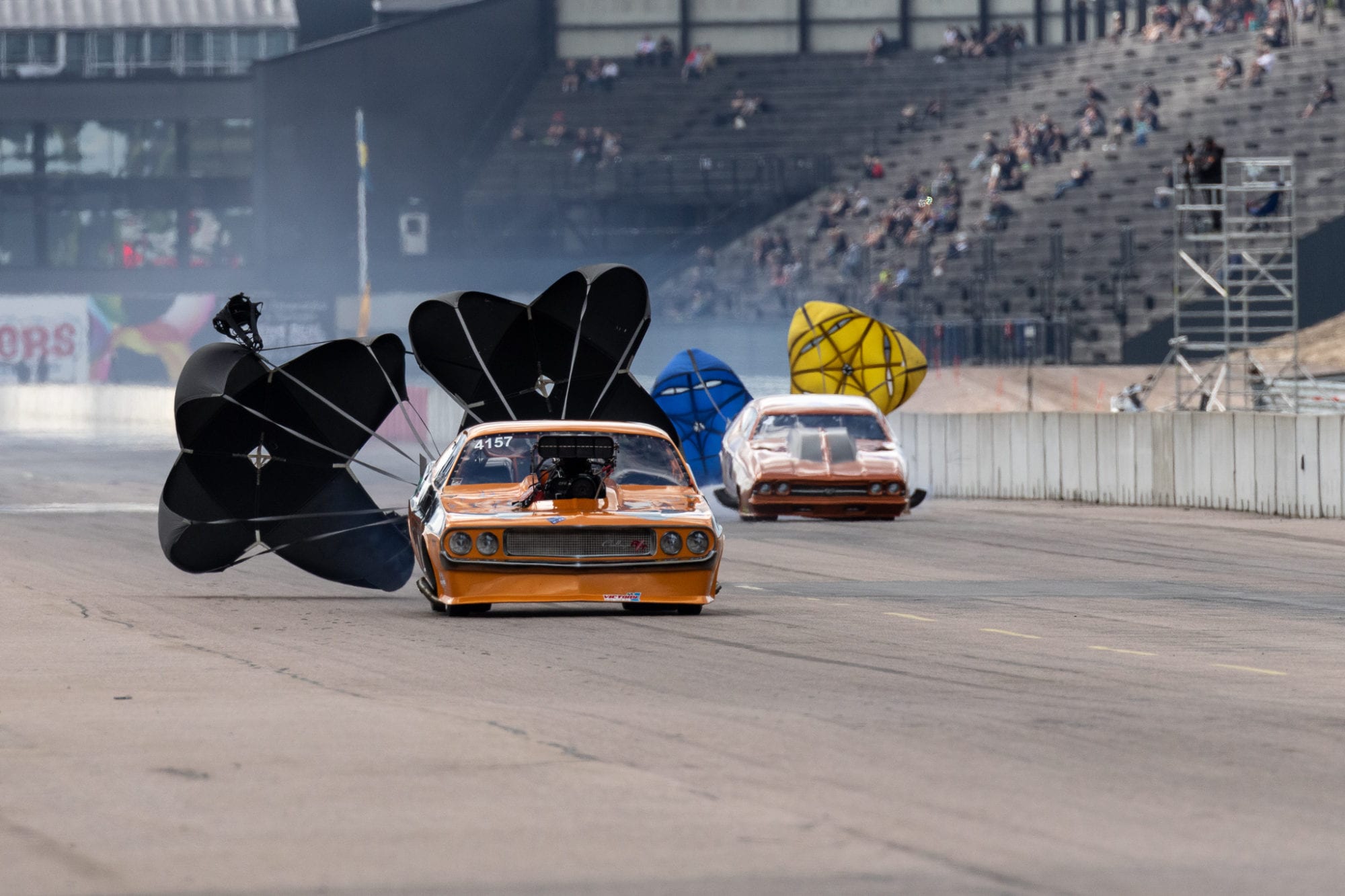 On race day, the hot temperatures dropped about 10 degrees and over the course of the days heavy winds and rains forced the racing action to several stops and kept the track crew busy all day long.

After beating Jndia Erbacher, who came in as an alternate for Patrik Pers when his engine didn’t fire in the first round, the reigning champion Anita Mäkelä went on to beat Maja Udtian on her route to the finals. On the other side of the ladder, No. 8 qualifier Micke Kågered upset a No. 1 qualifier Liam Jones in round one and beat Tethys in the semifinals to meet with Anita in the final round. Shortly before the finals of Top Fuel, another rain shower fell down, the cars got pushed back and drivers climbed out of their cockpits. After a while the track was dry again and it all came down to the final run of the race. Micke was off the line first but went into tire shake before 330 feet and clicked it off. Anita took the win with an early shut off but still posted a 4.0344 at 238.30 mph. That’s Anita’s second win of the season. She’s leading the FIA Championship points with 211 points before Maja Udtian with 140 and Micke Kågered with 110.

Top Methanol Main Event winner Sandro Bellio lost the first round against Jonny Lagg. Lagg himself met Silvio Strauch in the finals, who won against a tire-smoking Daniel Jedborn. German Silvio Strauch took runner-up in his first event after he got beat by Lagg on a holeshot. Lagg ran a 5.5336 at 269.07 mph to Strauch’s 5.4893 at 257.71 mph.

After defeating Kim Kristiansen in the first round and a bye run in the second due to Ålund not being able to answer the call and his defeat of Andreas Arthursson in the semifinals, David Vegter met Jan Ericsson in the final round of Pro Mod. Ericsson won over Markus Perman, Roger Johansson and Mats Eriksson on the way to the finals. Ericsson took the win with a 5.8365 at 241.74 mph to Vegter’s 7.0792 at 146.01 mph, who had to get out of it due to tire shake. Ericsson is currently sitting on top of the points list with 206 before Michael Gullqvist with 175 and Mats Eriksson with 168 points.

The final in Pro Stock turned out to be a repeat of the Main Event final when Jimmy Ålund pulled into stage against Michael Malmgren. Like in Santa Pod, Ålund had the slightly better run, a 6.6075 at 210.24, to Malmgren’s 6.6204 at 207.38 mph earned him the win and valuable championship points. He’s now leading with 218 to Malmgren’s 169 and Bengt Ljungdahl’s 101 currently sitting 3rd in points.

Winners in the other categories were:

The next stop on the FIA European Drag Racing Championship tour will be the FHRA Nitro Nationals at a new track in Kauhava, Finland. It’ll be a blank page for every pro team, which ought to be an interesting event with some possible surprise winners.