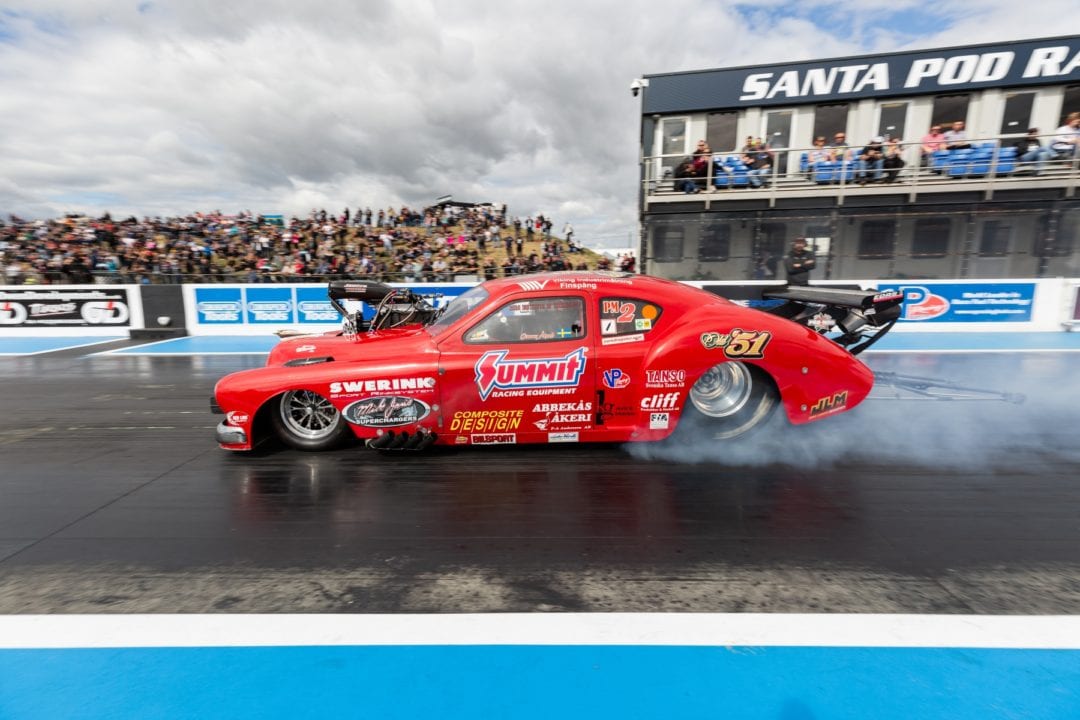 What Pomona Raceway is to NHRA, Santa Pod Raceway is to the FIA European Drag Racing scene. It’s the home of the season opener and the closing event as well.

While the NHRA has 24 races and preseason test sessions, the FIA Drag Racing and FIM Drag Bike season schedule only consists of a consolidated six-race schedule each year. Every race is crucial. Every team and racer must bring their A-game at every event, on every round. There is no Countdown to the Championship like the NHRA season has – the season basically starts with it. 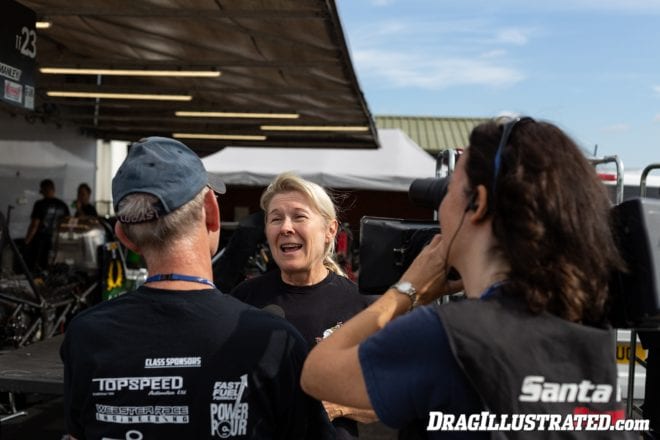 Anita Mäkelä, the ever-smiling Fin and her husband, Tommi Haapanen, had to defend their title from last year. After scoring the runner-up at the season opener and winning the second race of the season, a semifinal finish earned her the points lead after the third race, in her home country of Finland. After another semifinal loss, she took the win at the fifth race in Tierp, coming into Santa Pod as the points leader. 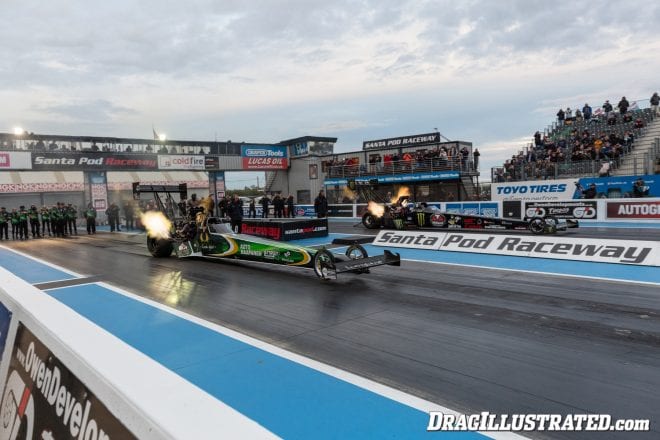 The qualifying days saw a bit of rain, which pushed the second Pro qualifying rounds later in the evening hours of each day. While the Brit and hometown boy Liam Jones struggled through qualifying, Mäkelä, whose personal best was a 3.877 at 313.30 mph going into the event, went straight to the No. 1 spot, improving her personal best in the process by running a 3.870 at 297.02 mph. She dominated the Top Fuel field on Sunday and ended up in the final against Top Fuel rookie Jndia Erbacher in an all-female final round. Mäkelä beat Erbacher on the tree and never looked back. Erbacher suffered from severe tire shake and had to click it off. Mäkelä not only took home the event win and the championship on the same day, she also ended the season as the European Top Fuel ET and speed record holder, which gave her at least three more reasons to smile. 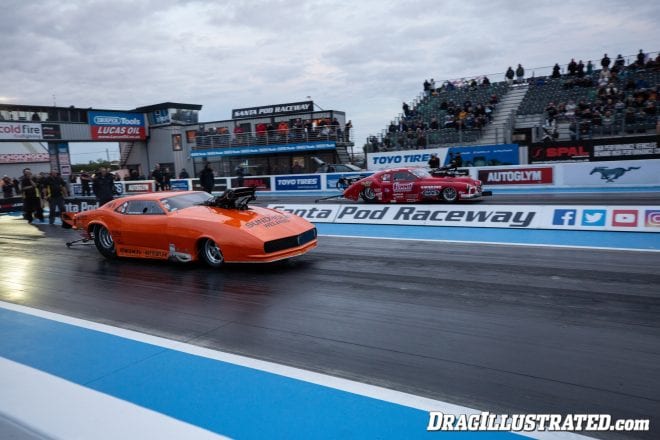 FIA Pro Mod racer Jimmy Alund has won 10 European championships in Pro Stock but never took home a win in Pro Mod. Would this be the year of the fast Swede? After a runner-up at the first race and a semifinal finish at the second event, he finally took home his first trophy at the FHRA Nitro Nationals in Finland. Coming into the German NitrOlympx as the points leader, he lost the semifinal round and with it the points lead. He came back with a vengeance into the fourth event, but came up short in the final against fellow Swedish countryman Andreas Arthursson. So the Euro Finals was the all-deciding event. Alund was running strong again from the beginning of the first round through the semifinal, almost every run a 5.8-second elapsed time. He faced off in the final round against Jan Ericsson. A little later at the tree, he overtook a tire-shaking Ericsson and beat him with a 5.873 vs. Ericsson’s 6.050 to seal his first European Pro Mod championship. 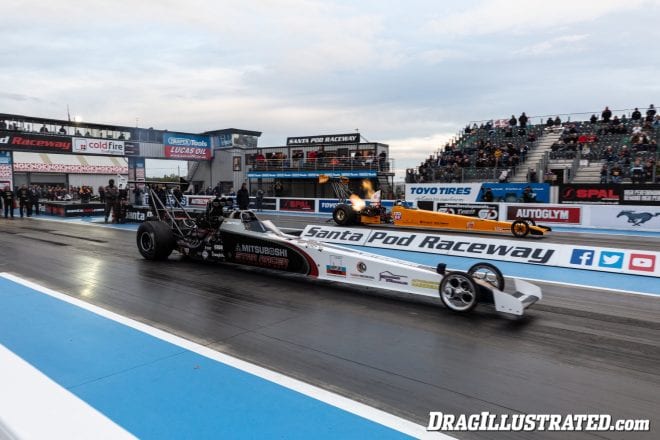 The Top Methanol event win – and season championship – went to Dennis Habermann (near lane) after defeating Jonny Lagg in the final round.

Top Methanol, running a cannonball format – dragsters and Funny Cars running together – this year, was an all-German affair. Team Habermann seemed to be a thread all year long. After having won three out of the six championship rounds in a row, the older of the two fastest German brothers, Timo Habermann looked like the favorite title candidate. He qualified third and was supposed to run his brother, Dennis, in the first round of race day. Throughout the season, they’ve met in nearly every final round, so Dennis was right behind Timo in the points chase. Timo had the better reaction time at the tree, but when his tires started to loose grip, he had to pedal it and ended his run by posting a 5.443 – no match for Dennis’ strong 5.307. Dennis took the round win and with it the championship. But there wasn’t a sign of celebration going on in the pits, as the team was after the event win, too, and prepared the car meticulously for the next round. Dennis went on to beat Jonny Lagg in the final, beating the only nitro-injected car in the field, with a tire-shaking 5.345 to a 5.429. The team went wild and so did the crowd.

The Pro Stock category saw multiple winners throughout the season. Jimmy Alund, who only entered three of the six events in Pro Stock but won two of them, looked like he had a fair chance to become the first European champ in two categories this year. But he did not enter the Finals and gave away the championship to Bent Ljungdahl, who was in the points lead halfway through the season without an event win. He went straight to the finals on Sunday and won the race and championship on the same day with his 6.66 at 202.57 mph vs. a tire-rattling 18.959 at only 41.47 mph from Michael Malmgren. 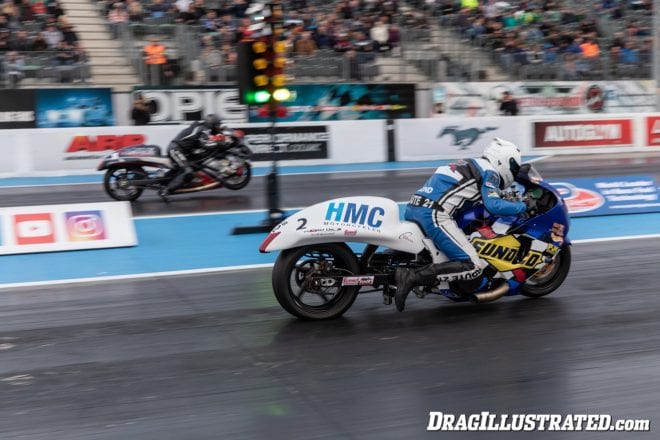 FIM Pro Stock Bike rider Martin Newbury entered race day from the No. 1 spot with a 7.148 at 185.13 mph and raced his way into the final, where he beat Betrand Maurice with a 7.191 at 182.32 mph to Maurice’s 7.495 at 169.17 mph. Maurice wasn’t too upset about the loss, since he had already won the championship by winning the second round, so the event win would have been the icing on the cake. Other event winners in the two-wheel categories were Brit Steve Woollatt in Top Fuel Bike and Marcus Christiansen in FIM Supertwin, as well as Mogens Lund from Denmark in Super Street Bike. Championships in the bike categories went to Filippos Papafilippou with the stunning orange and blue Gulf Top Fuel Bike and Marcus Christiansen in Supertwin, while Rick Stubbins was crowned the 2018 champion in the Super Street Bike category.

Now that the season is over it’s time for everyone to work on a new combination, a new setup, a new engine or even a new car or bike. In May 2019, the battle for the championship will be on once more, starting in Santa Pod, home of the FIA European Championship Drag Racing Series. 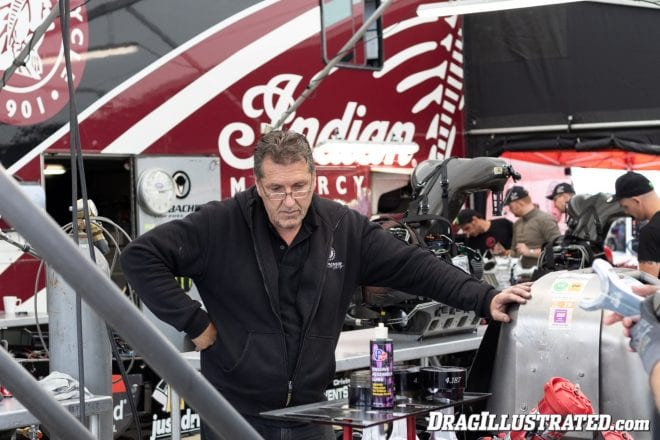 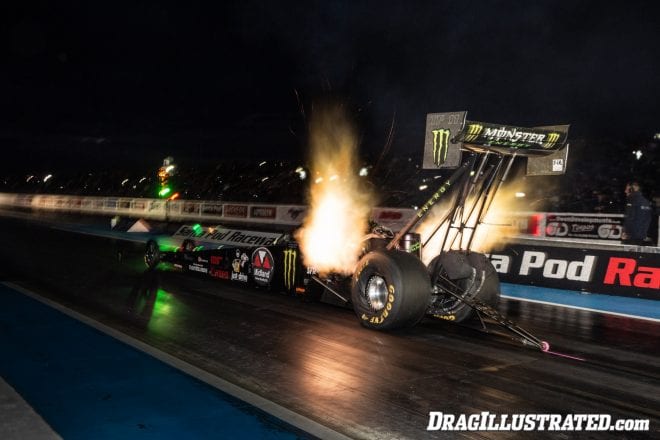 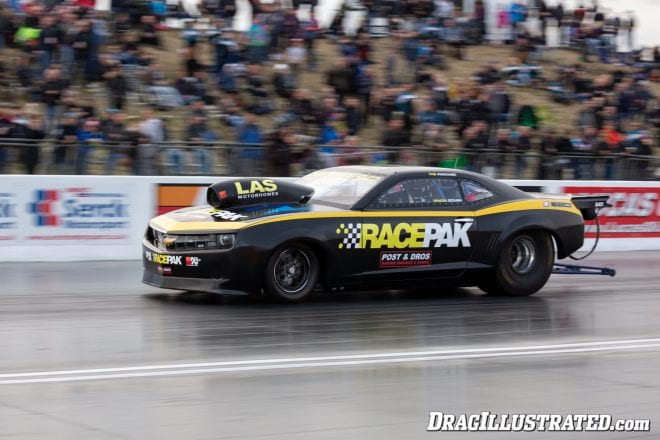