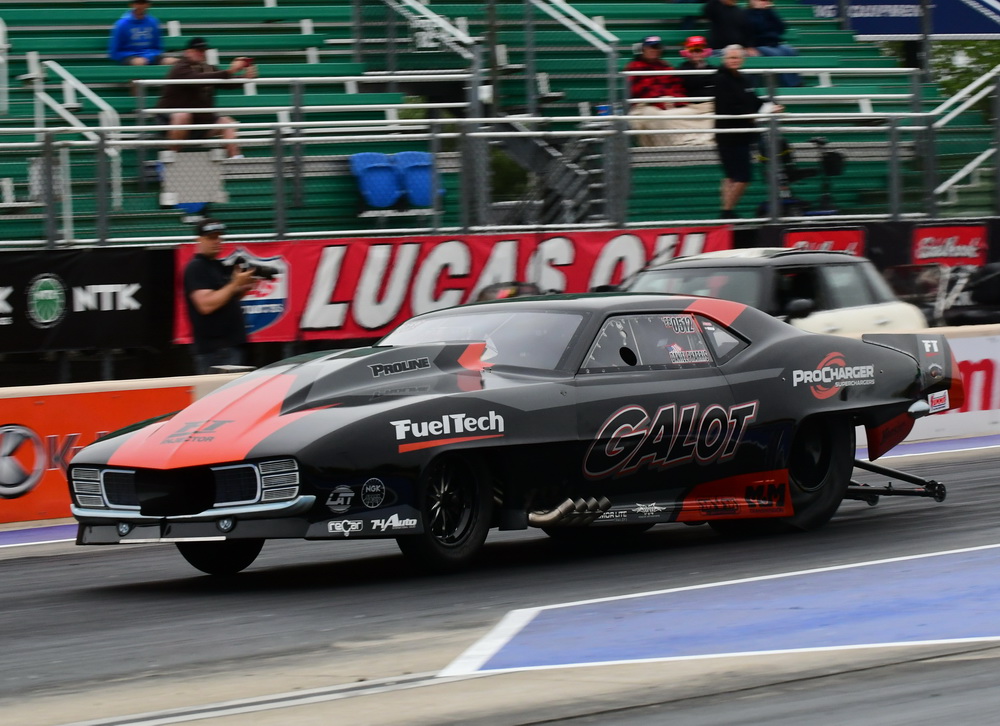 With rain in the forecast for Friday and Saturday, PDRA and track officials decided to run the first qualifying session on Thursday evening.

While the weather forecast shows rain for most of the day Friday and Saturday, PDRA officials will attempt to run a second qualifying session during any windows of opportunity that open.

“We’re all keeping an eye on the weather and we’ll do our best to give everyone one more qualifying session,” said Tyler Crossnoe, race director, PDRA. “If that happens Friday or Saturday, great. If not, we’ll run a second session on Sunday and go racing from there. We’ll keep everyone updated on the PDRA Facebook page and PDRA660.com.”

Barrier-breaking Radial vs. the World driver Daniel Pharris teamed up with the GALOT Motorsports team for a run at the PDRA Pro Boost world championship earlier this year. It took one of his best runs in the car in big-tire Pro Mod trim to top the 19-car Pro Boost qualifying order at Norwalk. His 3.649 at 207.05 in the Steve Petty-tuned GALOT Motorsports ’69 Camaro was the quickest of eight passes in the 3.60s.

“Honestly, we tried to keep it as safe as possible,” Pharris said. “Could we have gone faster? Probably. Have we been faster? Yes. It’s kind of a double-edged sword. You want to go No. 1 but you also want to make the field too. We were going to do whatever it took to get down the track. If it shook and I had to get out of it, I was gonna try to get back in it and try to run it down there just so we could put a number up. But it’s kind of like Russian roulette. We swung as hard as we thought we needed to swing and it stuck. We’re happy with it.” 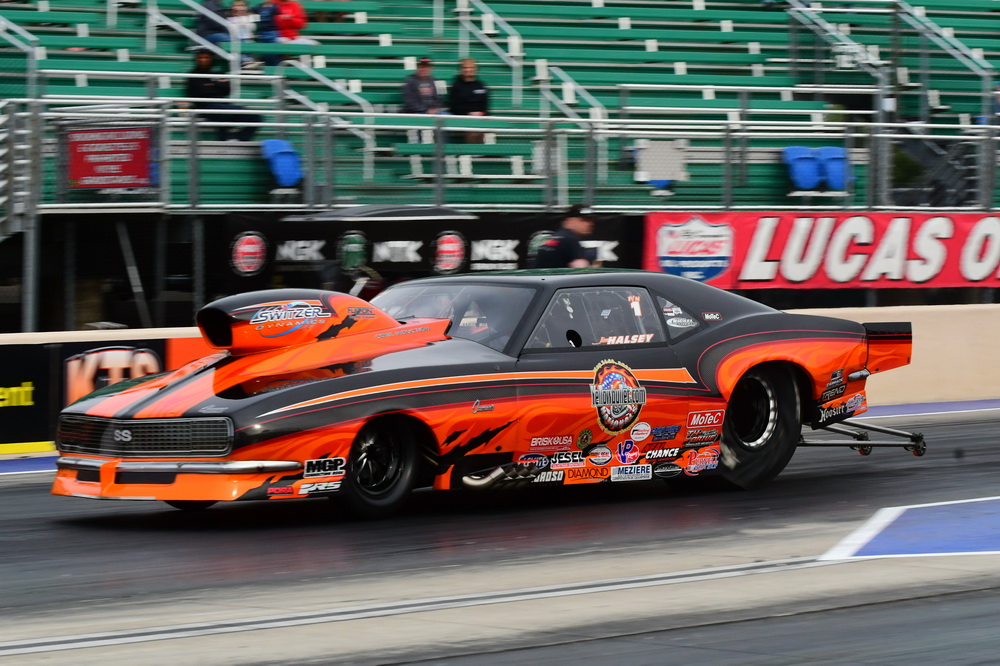 A strong pass in Thursday testing indicated Jim Halsey and his Brandon Switzer-tuned “Daddy Shark” ’68 Camaro had what it would take to qualify well in the evening’s lone session. Sure enough, the defending Pro Nitrous world champion laid down a 3.65 at 208.04 to take the provisional No. 1 spot by a sizable margin.

“The nerves were pretty bad before that run because this could be your one and only with 18 cars on the property,” Halsey said. “If you don’t go down [the track], you could be going home early. The pressure was on, for sure. It takes the pressure off for tonight, anyway. We can sleep tonight and hopefully we get another run or two tomorrow or Saturday.”

Jay Cox, fresh off a win at the PDRA Doorslammer Derby in early May, was the only other driver to record a pass in the 3.60-second range, running a 3.695 at 205.66 in his Buck-powered Butner Construction “Pumpkin” ’69 Camaro. Michigan’s Jackie Slone qualified third with a 3.725 at 202.39 in his Musi-powered Slone Boys Racing ’69 Camaro. 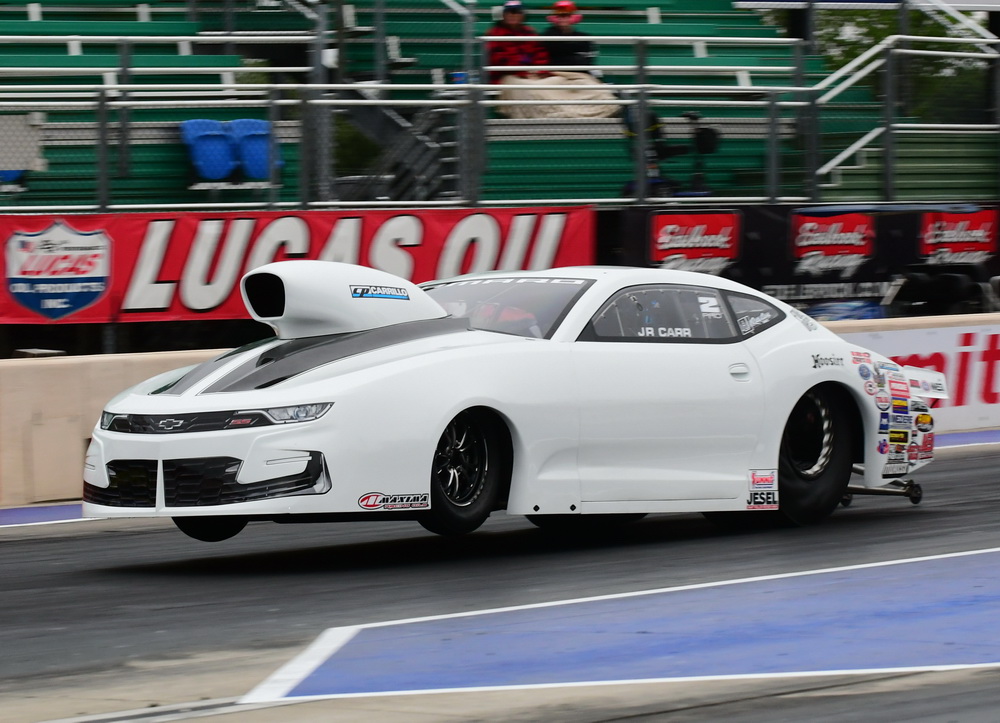 With 10 solid Extreme Pro Stock entries in the staging lanes for the first qualifying session, JR Carr knew he had to make a representative run to at least get in the eight-car field. Crew chief Frank Gugliotta gave him more than enough horsepower to do that, pushing the ’20 Camaro to a 4.048 at 180.26 to lead the field. If Carr stays in the top spot, it will be his fourth consecutive No. 1 qualifier award going back to the 2020 World Finals.

“That run was really important because that might be it,” Carr said. “Everybody knows it, so it was almost like first round. If you don’t make a good run, you might not be in the show. It’s that important. Whether you’re No. 1 or No. 7, it’s really important. It’s added pressure, but the ol’ white car keeps doing what it’s been doing. The guys are awesome all the time – flawless.”

Five other drivers behind Carr made passes in the 4.00s, including the past two world champions, John Montecalvo and Johnny Pluchino. Montecalvo, the 2019 champion, qualified second with a 4.058 at 177.91 in his Sonny’s-powered ’17 Camaro. Pluchino steered his Kaase-powered Strutmasters ’13 Mustang to a 4.061 at 179.06 to sit third. 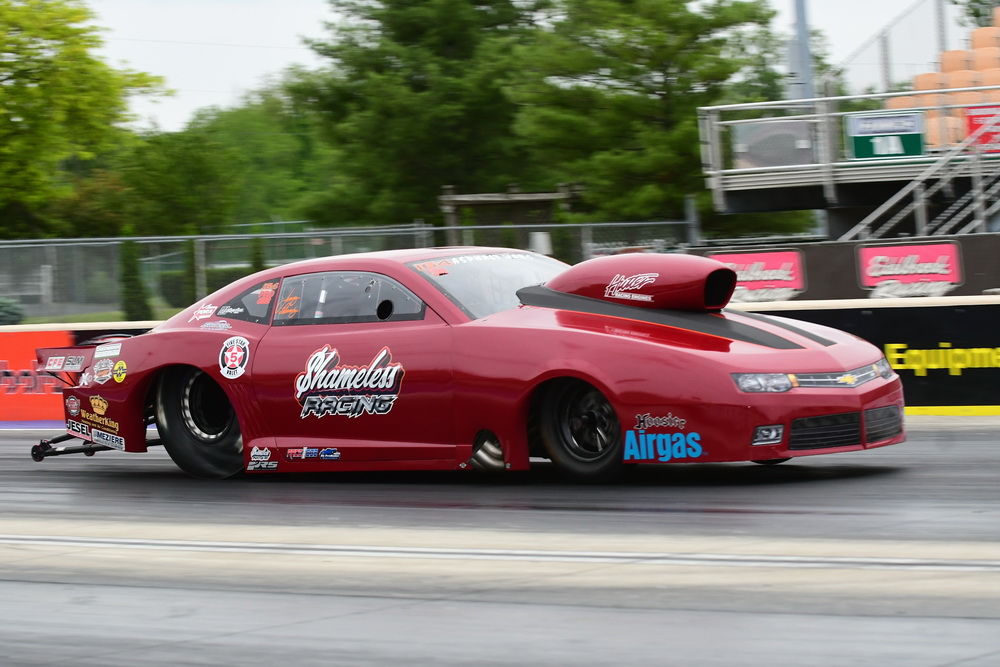 After some rule changes affected the Pro Outlaw 632 class following the last race on tour, Jimmy Pelcarsky was determined to keep his small-block-powered $hameless Racing ’15 Camaro running at the front of the pack. The Sagamore Hills, Ohio-based driver accomplished that, recording a 4.187 at 168.87 to lead the 18-car qualifying order.

“It solidifies that even with the [weight] penalty, we’re still a force to be reckoned with,” Pelcarsky said of his performance. “We wanted to show out at Norwalk, our home track, because I have a lot of people here supporting the PDRA and us as racers. I’d like to stay at No. 1 and we’re going to work really hard – I have to change a piston – and we’ll be back Saturday after the rain.”

$hameless Racing leader and defending world champion Wes Distefano tucked in behind Pelcarsky with a 4.192 at 169.68 in his Musi-powered ’68 Camaro. Past world champion Dillon Voss claimed the No. 3 spot in his Voss-powered Vigilante Associates ’17 Corvette with a 4.217 at 170.08. 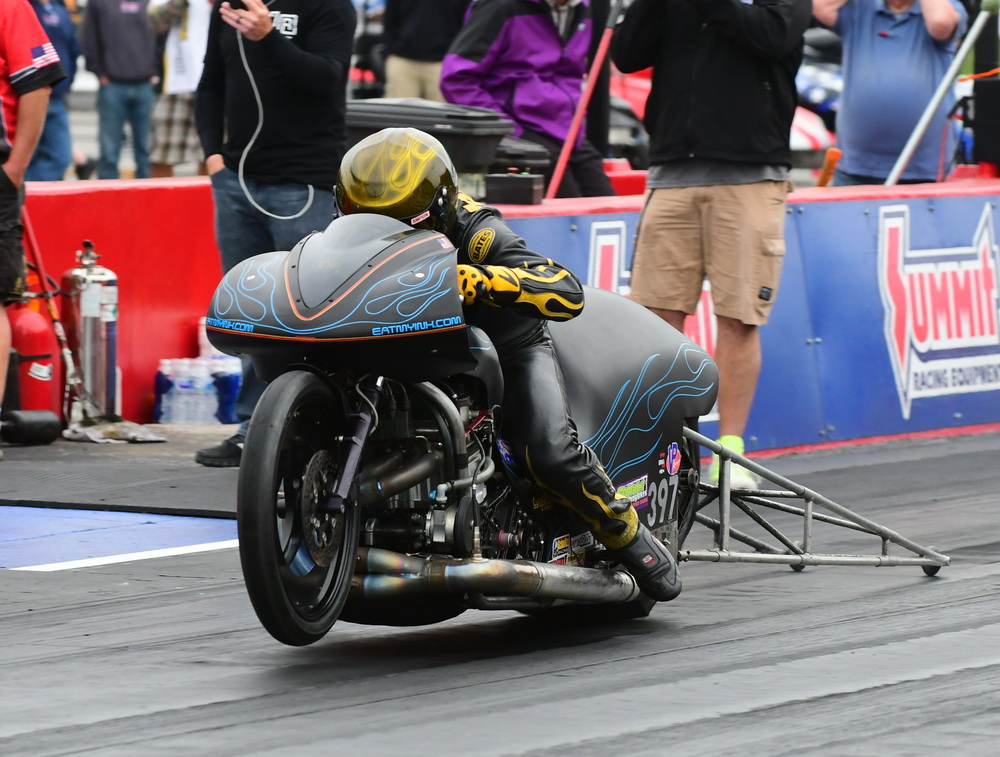 Three-time world champion Eric McKinney rocketed to the top spot in Pro Nitrous Motorcycle on the strength of a 4.01 at 178.35 aboard the McKinney Motorsports Hayabusa typically piloted by his teammate and tuner, Ashley Owens. The Ohio rider hopes to dip into the 3-second zone before the event is over.

“It’s definitely awesome to qualify No. 1 so far,” McKinney said. “I’m riding Ashley’s bike and he has it dialed in. He’s trying to fix my bike. It’s got some issues. We missed most of the races last year. It’s awesome to come to our first race this year, at basically our home track, and set the pole right from the get-go. Hopefully we stay there.”

Two other riders made a qualifying attempt in the first session, with Chris Garner-Jones taking his Jones Racing Hayabusa to a 4.182 at 171.27 and Gerald Smith following with his 4.697 at 137.20. 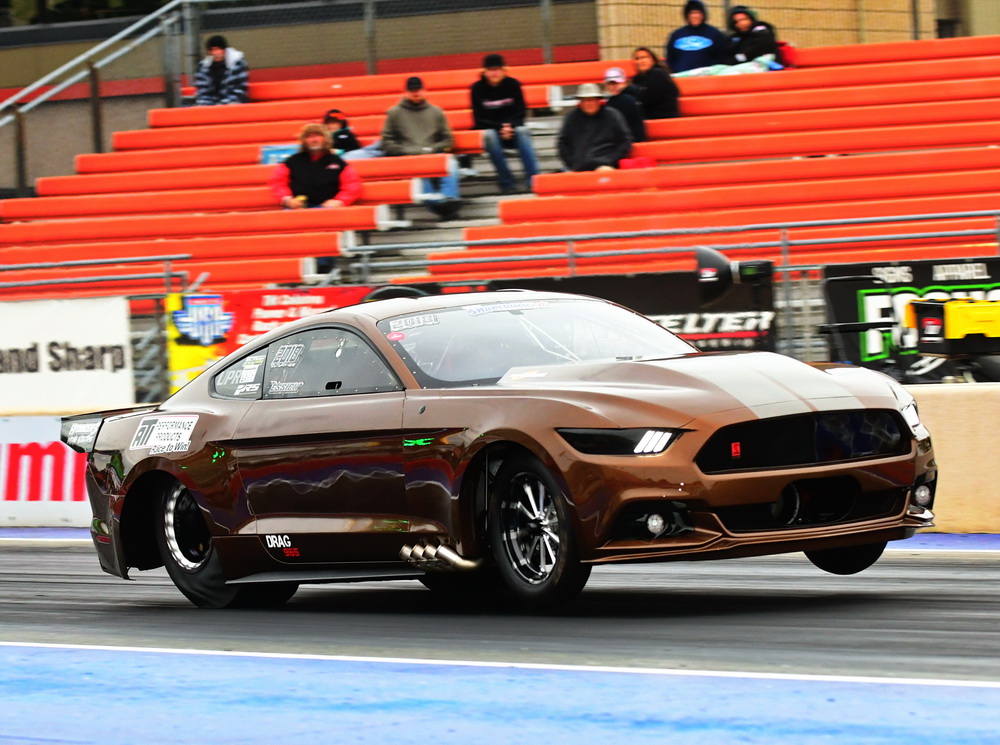 Pro Street, the PDRA’s newly revamped Outlaw 10.5-style class, surged to 10 cars in the opening qualifying session of the class’ second stop on the tour. Tim Essick had what it took to top the list in his home-built “Brown Sugar” ’18 Mustang, posting a 4.013 at 186.74.

“Of course, like everybody on the property, you want to be No. 1 qualifier,” Essick said, thanking supporters ATI Performance, ProCharger, Billet Atomizer, UPR, and Precision Racing Suspension. “But we wanted to make sure we went down too. We tried to make sure it would go. We got two test hits in earlier today. One was just a little shakedown to see where we were at, then the second one we leaned on it a little bit. It set us up good for this first round of qualifying. It went down – it was kind of ugly – but it went down.” 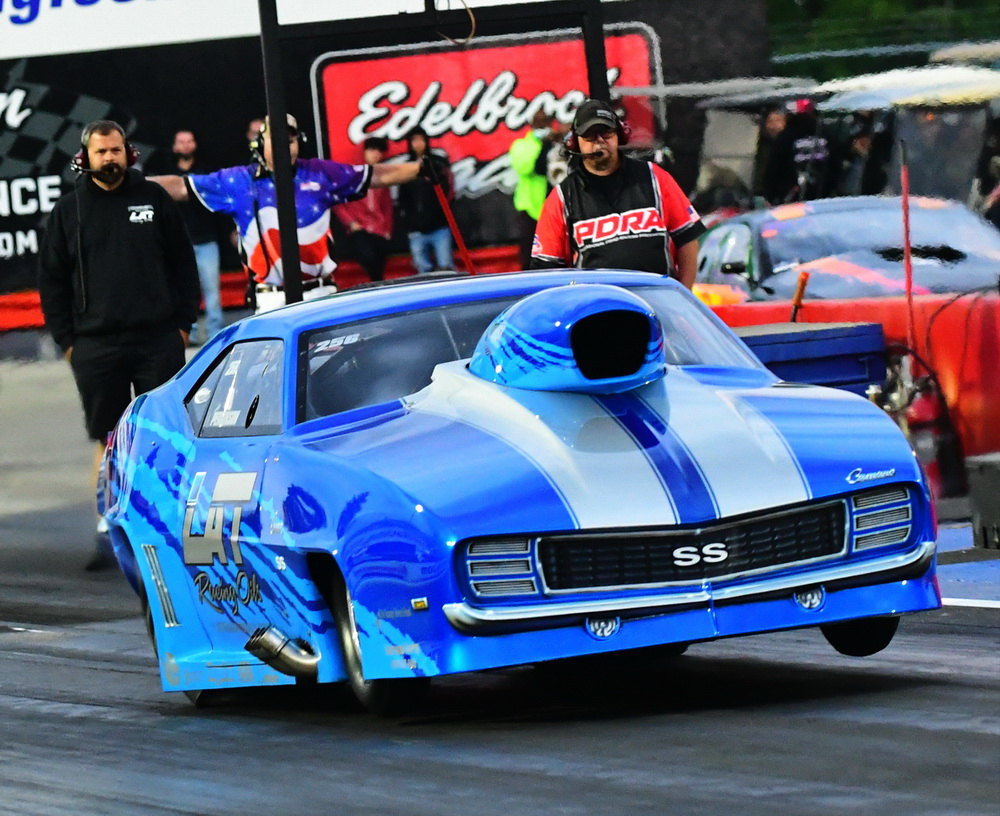 Past Elite Top Sportsman world champion Donny “Hollywood” Urban is sitting just outside the Elite field with his 4.135 at 182.75, but he’s the current leader in the Top Sportsman 32 field. 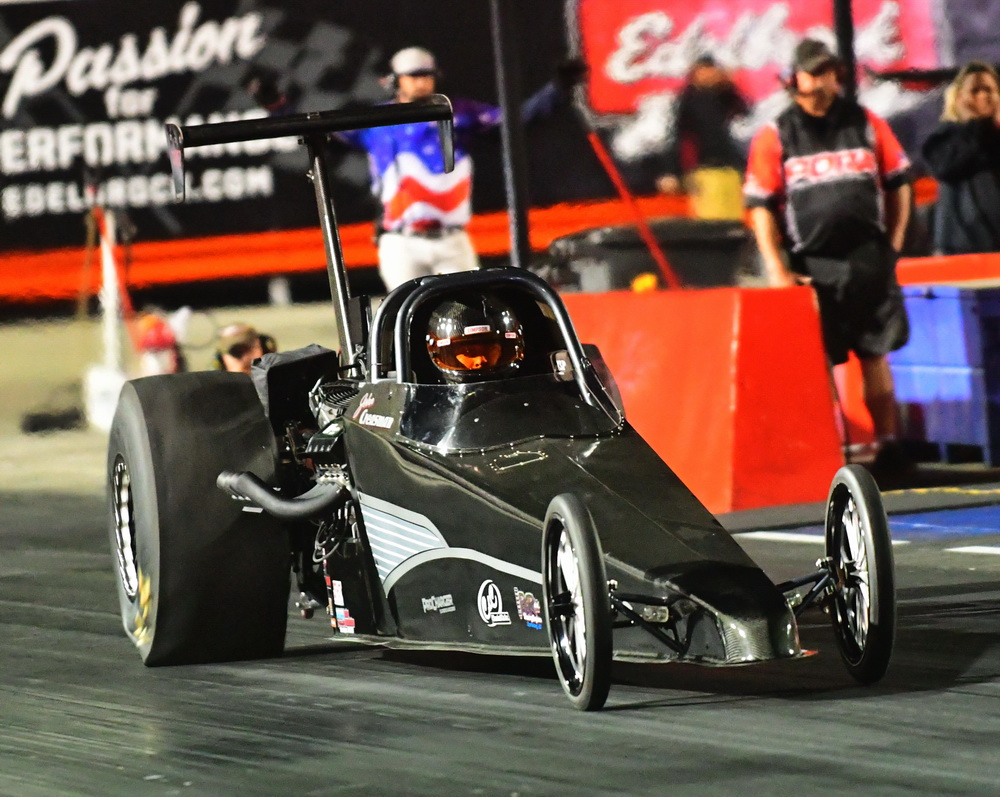 It took a 3.89 or quicker to make it into the 16-car Elite Top Dragster field. Mike Knott, from nearby Wakeman, Ohio, just missed the Elite field with his 3.919 at 186.18 in his blown Born Equipment ’08 Spitzer, though that means he leads the Top Dragster 32 field.