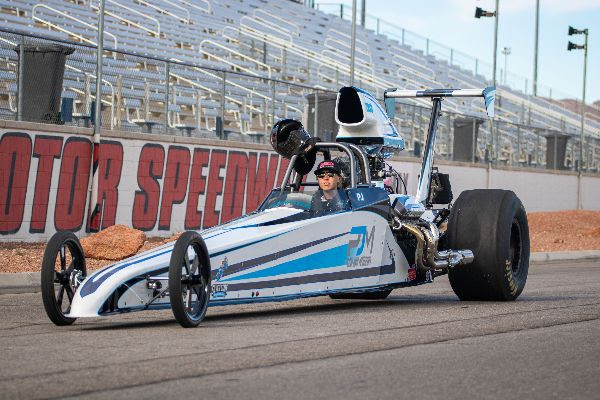 Peyton Januik is looking forward to diving into a full slate of drag racing this year and capitalizing on all she’s learned and the power that she knows her racecar is capable of harnessing. The third-generation racer from Las Vegas is proud to take on the fresh season with primary backing from fellow racer Shane Thompson’s acclaimed Silver State Refrigeration and HVAC.

“I’ve always looked up to Shane, and it means a lot that he was interested in partnering with us,” said Januik, who is slated to race 15 events or more this year flying the colors of Silver State on the side of the dragster she bracket races and also competes with in NHRA’s Lucas Oil Drag Racing Series in the Super Comp category.

“Shane is a phenomenal person, and he’s always been there to help – I even bought the car I race now from him. I’m looking forward to representing Silver State on the racetrack in 2022, and I hope we make him proud,” she said.

In 2022, Peyton is dialed in to giving it her best shot, and she’ll do so with her mom, Tiffany, by her side. The two are breaking the mold as one of the few mother-daughter teams in drag racing that prepare the racecar, crew during the events, and win together. While Peyton manages the data and anything mathematical in her racing, Tiffany leads the charge on the mechanical side of things.

When she isn’t racing, the younger Januik is focused on pursuing her degree in marketing at Dixie State University in Saint George, Utah. The classroom isn’t the only place she’s gaining an education, though.

“In our first full season racing with just me and my mom, there was definitely a learning curve. But it was also one of the most successful seasons I’ve ever had,” said former Jr. drag racer Januik, who won the Electronics class at the 2020 Street Car Super Nationals.

“Over the past year, I’ve found the confidence to make calls for the car, and that in itself was a huge success for me. Overall, I’ve learned so much just by talking to more people, and a lot of that advice has ended up working for me. I see us continuing to get better and stronger.”

Januik will start and end her NHRA efforts this year at the Pacific Division races at her home track, The Strip at Las Vegas Motor Speedway. She is even more keen on getting to some of the biggest and best bracket races in the country, including the K&N Spring Fling Million.

“I know it will be challenging to balance school and racing, but ultimately, it’s going to come down to discipline,” she said. “Silver State and great partners like Torco Race Fuels, Rennol Designs, and Hoosier Racing Tire have given me what I need to succeed, and now it’s up to me. I can’t thank them enough.”