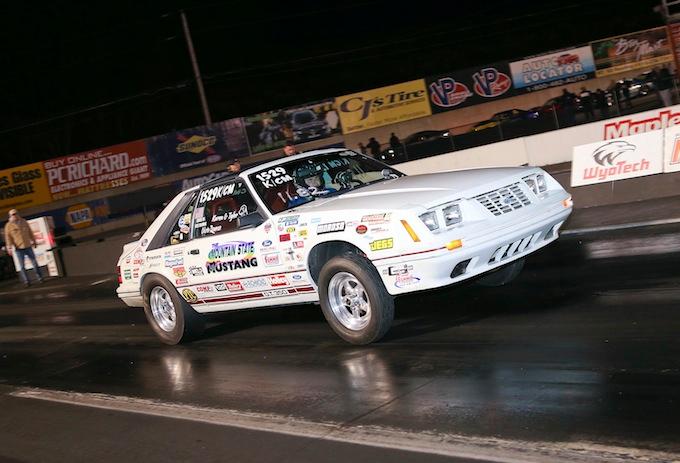 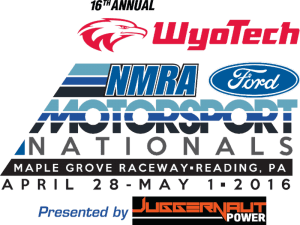 The cold and wet weather might have dampened the mood at the 16th Annual WyoTech NMRA Ford Motorsport Nationals presented by Juggernaut Power, but NMRA racers refused to give up and forged ahead with shortened-qualifying rounds and a little extra hustle in the program. Thanks to the Maple Grove Raceway staff and the cooperation of the racers about two-thirds of the scheduled racing program was completed in just a day-and-a-half of on-track competition. The short weekend brought several record-setting runs in Coyote Stock, Coyote Modified, Factory Stock and others. In fact, Joel Greathouse ran a 4.36 ET driving the Johnston family Mustang to set a wicked fast record in the Street Outlaw class.

Included in the finished categories were JPC Racing Turbo Coyote Shootout, QA1 True Street, Muscle Mustangs All-Female Shootout presented by American Muscle, Micro Strategies Stock/Super Stock Combo, all three Bracket categories, and G-Force Racing Transmissions Pure Street. The remainder of the index and heads-up eliminators will be completed during the next stop on the NMRA tour, the SuperNationals held at National Trail Raceway (Hebron, OH) over the weekend of June 9-12, 2016.

The lone NMRA championship category to complete its elimination rounds were the racers in the G-Force Racing Transmissions Pure Street class. Teddy Weaver continued his winning streak in the naturally aspirated eliminator and bested Tommy Godfrey on his way to the Aerospace Components Winner’s Circle. The Roush-powered Terminator clone took out the four-time NMRA champion by rushing to the finish line in just 9.557 at 139.54 mph. Godfrey ran 9.757 at 137.86 mph to secure runner-up honors. 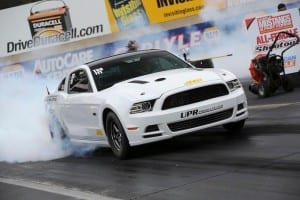 From naturally aspirated to boosted-JPC Racing Turbo Coyote Shootout was super-quick with Ronnie Reynolds scoring a win after falling short two months ago during the Spring Break Shootout. The number one qualifier ran a career best of 7.648 at 180.69 mph to secure the top position on the ladder. He beat fellow JPC Racing-built ride of Brad Bench with a 7.796 at 179.61 mph to Bench’s 8.925 at just 141.91 mph.

The largest class in NMRA drag racing is QA1 True Street and 64 entries made the call on Saturday for the 30-mile cruise, which winded through the scenic backcountry roads of Pennsylvania. The True Street class served a dual-purpose, first in its traditional format where a string of passes down the track are averaged out and NMRA officials reward the Overall Winner, Overall Runner-Up, and the quickest averages in pre-determined time categories. Normally three runs are used for the average but NMRA officials cut it short to just two due to weather and a couple of on-track incidents.

The Overall Winner honors were awarded to Mike Jovanis, who is no stranger to the famous 6-foot True Street trophy. He secured the win with an 8.458 average while New York racer Jason Kahles was the Overall Runner-Up with a 9.037 average. Other winners include Brian Culmone (9-second), Joe Cascio (10-second), Scott Lehr (11-second), Robert Foley (12-second), William McCurdy (13-second), Chris Bremer (14-second), and Michael Phillips (15-second). 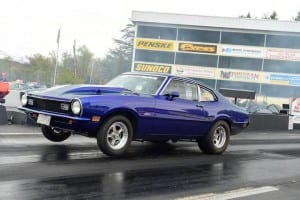 The second purpose of True Street for the third stop on the NMRA tour was the All-Female Shootout, presented by American Muscle. The ladies of True Street were ranked in order for an All-Female running of the class and the top eight racers were inserted into a heads-up elimination ladder. The All-Female True Street Overall Win went to Leslie Upole while Nikki Frost secured the Overall Runner-Up. These two ladies would end up racing each other in the finals of the Quick 8 where Upole ran 10.747 at 123.40 mph in her Maverick and beat Frost, who posted a career-best of 10.871 at 117.87 mph.

Micro Strategies Stock/Super Stock combo class added a unique flare to the already diverse line-up of Fords that attacked the Pennsylvania-based race track. Of course the talk of the class was the extensive line-up of Cobra Jet racecars fielded by Bongiovanni Racing. It ended up being a Stock vs. Super Stock final with Chris Bowman fielding a 1984 Mustang GT in Stock trim against one of the Bongiovanni entries, a 2008 Cobra Jet driven by noted NHRA driver Ray Scardelli. The race was over before it began, Scardelli red lit and Bowman drove right through the finish line and into the Aerospace Components Winner’s Circle.

NMRA officials worked together with the Maple Grove Raceway staff to develop a bracket racing program that fits the local Ford crowd that frequents the track. Four categories were developed for the Ford-only race with B1 acting as Fast Ford, B2 Quick Ford, B3 Street Ford, and B4 Nostalgia Ford. Shane Williams, who was double entered in Exedy Racing Clutch Modular Muscle, survived four rounds in B1 Fast Ford to take the win. Rodger Vogel was the B2 Quick Ford winner while John Grater was the B3 Street Ford victor. The final bracket race winner was Joe Grippo in his 1966 Ford Fairlane, which took the B4 Nostalgia Ford eliminator.