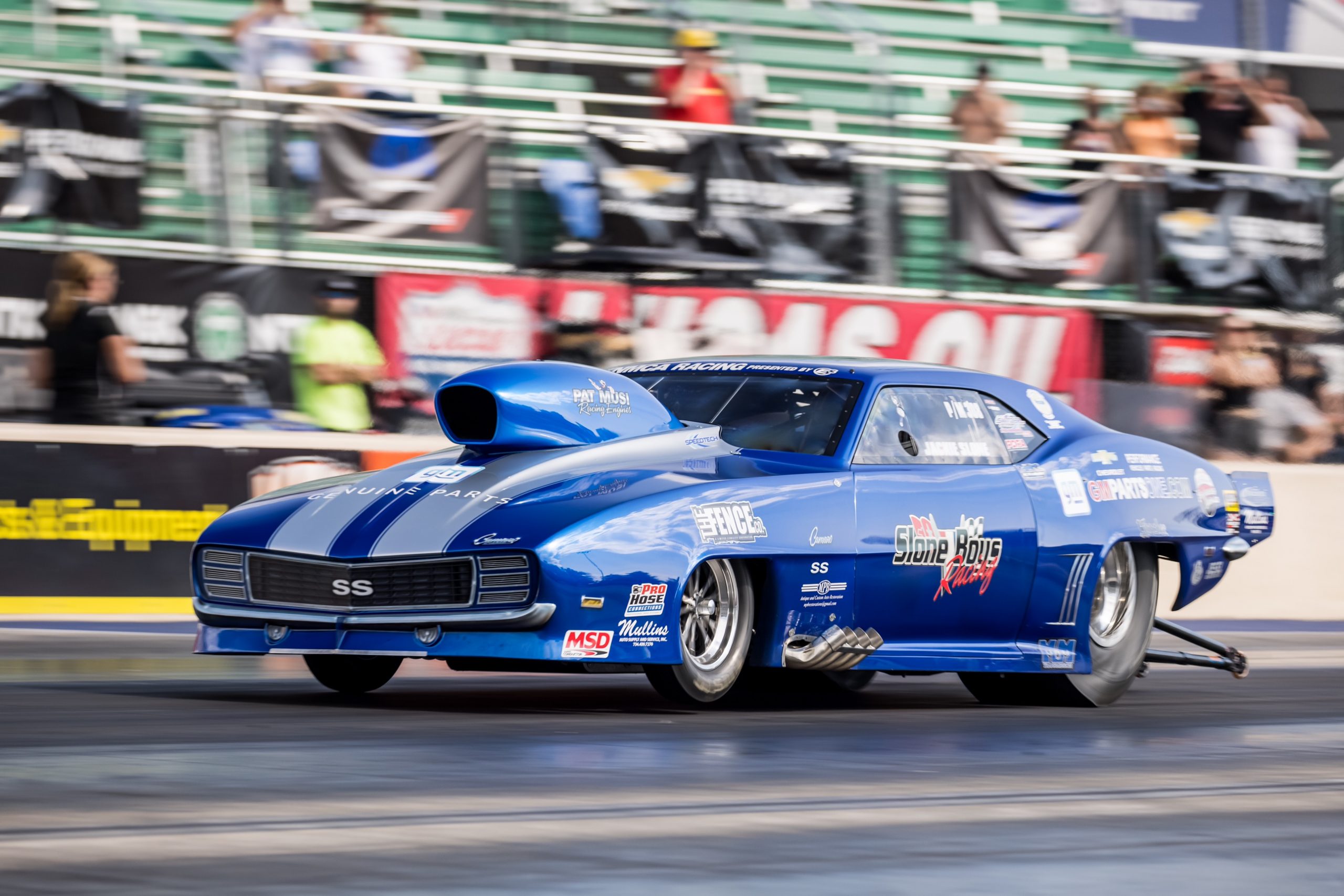 Despite heat, humidity, and heavy rain, racers were incredibly competitive at the NMCA All-American Nationals, Aug. 26-29, 2021, at Summit Motorsports Park in Norwalk, Ohio. They pushed play rather than pause, and took on the challenges that came with tuning and traversing the track in oppressive weather. They wanted to go wheels-up and win, and along the way, they wowed the crowd.

Awaiting those who fought and found victory at this fifth-of-six races on the NMCA tour were enticing Edelbrock Victor Awards.

Most of the VP Racing Lubricants Xtreme Pro Mod drivers pulled off 3.70 and 3.80 passes in qualifying, and among them was Chip King, who clocked a 3.75 in his Mustang Mach 1 to set the pace. But as the sun set on Sunday night, Jackie Slone and Dave Roemer were inching into the beams in their nitrous-sipping Camaros for the final round of eliminations. Slone secured the win with a 3.75 after Roemer turned on the red light.

Alan Felts arrived at a 4.44 to lead the pack in qualifying in Mickey Thompson Street Outlaw, but the final round of eliminations belonged to Steve Cagle and Jonathan Maida. Cagle collected the win with a 4.76 against Maida, who had him on the tree, but was forced to lift.

Chuck Watson II stopped the clocks at 7.74 to lead qualifying in his Mustang Cobra Jet in Holley EFI Factory Super Cars, and Lenny Lottig and Scott Libersher lined up for the final round of eliminations. Lottig lead-footed to the win with a 7.87 after Libersher turned on the red light and rode out a wild wheelie on the way to an 8.44.

In ARP Nitrous Pro Street, Jake Naumann nailed a 4.42 in his Nova to set the pace in qualifying, and facing each other in the final round of eliminations were Vince Khoury and David Fallon Jr. Khoury won with a 4.47 in his Firebird when Fallon Jr. turned on the red light in his Camaro.

Dave Fiscus flew to a 4.65 in his Mustang to lead qualifying in Edelbrock Xtreme Street, and Eric Bardekoff and Chris Holbrook entertained with an exciting final round of eliminations. Bardekoff had a holeshot and a 4.59 to upset Holbrook, who was just slightly quicker with a 4.57. 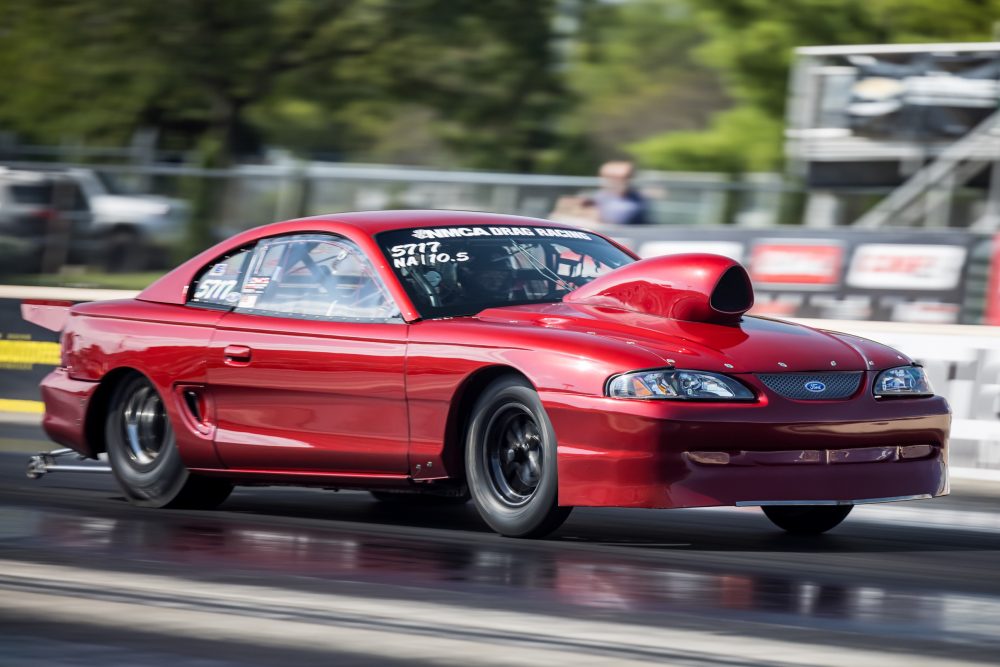 With a 7.86 in his Mustang, Leonard Long lapped the quickest pass in Dart NA 10.5 qualifying, and he remained on point all weekend and wound up in the final round of eliminations to face David Theisen and his Firebird. Long leaped off the line, Theisen went into a wheelie, and Long landed the win with a 7.93 over Theisen’s close 7.99.

In Chevrolet Performance Stock presented by Scoggin Dickey Parts Center, Ronnie Hackelton hauled to a 9.98 in his Camaro to lead qualifying, and he made it to the final round of eliminations, where he faced Scott Brown and his Camaro. Hackelton hung on for the win with a 10.01 to Brown’s 10.03. 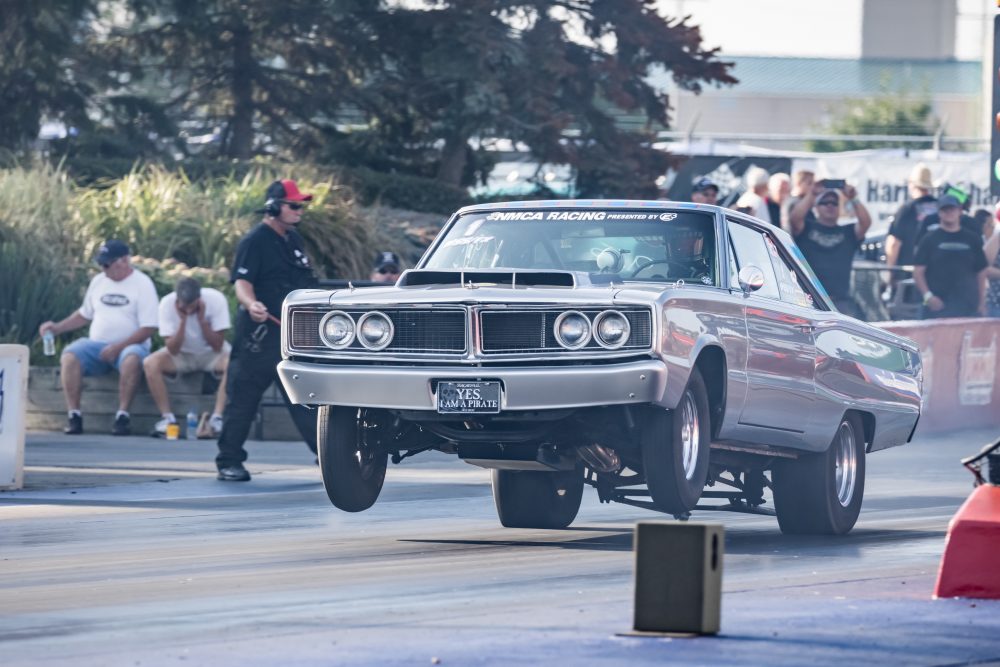 In Quick Fuel Technology Nostalgia Super Stock, Jeffrey Hoblick ran right on his 10.25 index in his Belvedere to lead qualifying, but Brent Wheeler and Mike Schaefer lined up alongside each other in the final round of eliminations. Wheeler wrapped up the win with a 9.78 on a 9.75 over Schaefer’s 9.04 on a 9.00.

In LME Street King presented by Chevrolet Performance, Jonathon Glaze was 10.20 on a 10.50 index in his Trans Am to lead qualifying, but going to the final round of eliminations were Al Corda and Bryan Williams. Corda added another win to his racing resume with a 10.24 on a 10.25 over Williams, who also broke out with a 9.94 on a 10.00.

Proform LSX Rumble presented by Chevrolet Performance saw David Rickey run to an 11.00 on an 11.00 index to lead qualifying, and later in the weekend, he faced Dewayne Massengale in the final round of eliminations. Massengale motored to the win with an 11.99 on a 12.00 over Rickey, who also broke out with a 10.99 on an 11.00.

With the Chevrolet Performance headquarters just two hours away in the Motor City, the COPO Parts Direct COPO Camaro Battle is a prominent part of this annual event. In the final round of the COPO Parts Direct COPO Camaro Battle, Al Corda and Ed Hawkins recorded comparable reaction times, and Corda wrapped up the win after running on his 10.21 dial, and Hawkins recorded a 9.73 on a 9.72.

The COPO Parts Direct NA COPO category, for racers who rely on naturally aspirated engines in their COPO Camaros, is a component of the Chevrolet Performance COPO Camaro Shootout presented by COPO Parts Direct. This year, Don Belles blasted to the win with a 9.17 against Daren Poole-Adams and his 9.38.

Watson Racing is celebrated across the country for its role in the building of Mustang Cobra Jets, and the company supports the Cobra Jet Showdown presented by Watson Racing at this annual event. As a special tribute to Chuck Watson Sr., who passed away in March, a moment of silence was held as part of pre-race ceremonies, with his son, Chuck Watson II, fellow racers, family and friends on the starting line. Then later in the weekend, Steve Trombley and Cody Herron lined their Mustang Cobra Jets for the final round of eliminations of the Cobra Jet Showdown presented by Watson Racing, and Trombley took the win with a 9.14 on a 9.14 against Herron’s 9.20 on a 9.11.

Cor-A-Vent Factory Stock and Factory Appearing Stock Tire (FAST), a category for cars that appear as they did when they were in the showroom, joined NMCA racers at this event, and they decided to split their pot in the second round of eliminations, during a rain delay.

Racers of the Motor City Muscle Challenge, a heads-up, naturally aspirated class where cars wear 9-inch tires, were a special part of this event, and Shawn Staniszewski soared to an 8.86 in his super-clear Mustang to lead qualifying. The Michigander made it to the final round of eliminations, where he turned on the red light, sending Richard Eldred to the win with a 9.03 in his Nova.

NMCA TorqStorm Superchargers True Street drivers went for a 30-mile cruise on the roads around Summit Motorsports Park before returning to make three back-to-back runs down the famous race track. Scott Oshinski was the overall winner with a 9.05 average, and Adam Kemmer was the runner-up with a 9.32. Other standouts were Jeremy Hedlund, the 9-second winner, Ernest Krygier, the 10-second winner, Marshall Meyers, the 11-second winner, Anthony Jager, the 12-second winner, Rodney Ward, the 13-second winner, Rob Tackett, the 14-second winner and Austin Wilson, the 15-second winner.

Late-model HEMI vehicles, including Challengers, Chargers, Demons and Hellcats joined forces for the Dodge // Mopar HEMI Shootout, where Tony Demaio wrapped up the overall win with a 9.45 average and Robert Hess ran to the runner-up with a 10.18 average. Bruce Phillips was the 10-second winner, John Govenettio was the 11-second winner, Randy Stephenson was the 12-second winner and Rich Sprinzl was the 13-second winner. Additional accolades go to Charles Tyree, the 14-second winner, and Nicole Ratliff, the 15-second winner.

The eight quickest drivers in the Dodge // Mopar HEMI Shootout went on to the Arrington Performance HEMI Quick 8 presented by Red Line Oil, where Tony Demaio took his second win of the weekend with a 9.52 over Robert Hess and his 10.22.

Bracket Open was offered to racers who took part in MagnaFuel True Street, the Dodge // Mopar HEMI Shootout, Chevrolet Performance COPO Camaro Shootout presented by COPO Parts Direct and Cobra Jet Showdown presented by Watson Racing. When the dust settled, Alex Simmons secured the win with an 8.83 on an 8.74 in his COPO Camaro over Eva Ullery, who broke out with a 12.11 on a 12.15 in her Mustang.

“Our team is proud to host the NMCA All-American Nationals,” said Bill Bader Jr., president of Summit Motorsports Park. “It has grown into one of our crown jewel events. In all reality, it’s a prestigious national event. The number of cars, the caliber of drivers and the level of competition is stout. If you’re a car person, it’s a must-attend event.”

The NMCA congratulates the racers who made it all the way to the NMCA Winner’s Circle. The focus now turns to season championships, which will be secured across the categories at the final NMCA event of the year, the 20th Annual NMCA World Street Finals presented by Chevrolet Performance, Sept. 23-26, 2021 at  Lucas Oil Raceway in Indianapolis, Indiana.