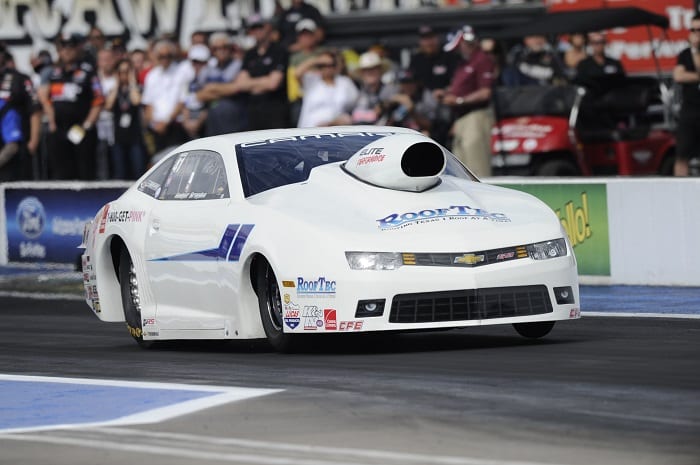 Rodger Brogdon got the itch to return to racing last year after two years away from the sport, but the rigors of hiring a new team and outfitting an entire Pro Stock operation didn’t exactly appeal to the three-time event winner.

Enter Elite Motorsports and what has turned into a dream scenario for the veteran in 2019.

Brogdon will be back to a full-time driving role in 2019, latching on with the talented Elite Motorsports camp that offered all of the advantages of competing in a sport he loves without any of the possible drawbacks.

“It just made a lot of sense,” Brogdon said. “I really didn’t want to have to go through buying everything again, hiring crew members, all that. I have three companies that I run. Between all those I couldn’t put anything more on my plate. This is the ideal situation for me: Fly out on Thursday and come home Sunday night. It sounds fantastic.”

Brogdon will start the year racing a RBR Machine – one of Brogdon’s many businesses – Chevrolet Camaro, but the plan is to move into a Ford Mustang as soon as possible.

That will bring some much-needed diversity into the class and Brogdon is excited to see what he can accomplish this year. He raced once at his home track, Houston Raceway Park powered by Pennzoil, last year and that’s all it took.

Coupled with the reduced Pro Stock schedule of 18 races in 2019 and it couldn’t have worked out any better for him.

“I’ve known (team owner) Richard (Freeman) and his family for over 20 years,” Brogdon said. “It’s a great group of people and I’ll fall right in there with them. I’m looking forward to it. I’m very fortunate to be part of this deal.

“The schedule change made a big difference to me. It’s only six more races, but that’s a big difference. If I’m not working, I don’t make money. Most of the people are out there just like me, working. It’s two-fold for sure. I look at the cut back in the schedule as being very positive.”

Brogdon has always had a passion for racing, working through the Super Stock and Comp ranks before heading to Pro Stock.

His first victory came in 2013 against now-Elite Motorsports teammate Erica Enders at Bristol, picking up wins in each of the next two seasons.

Brogdon stopped competing after the 2015 season, but the lure of sitting behind the wheel brought him back last year in Houston.

“It’s hard to explain, but you get hooked on it. It’s a blast,” Brogdon said.

But competing at 24 races against a talented field while also trying to run a trio of successful businesses wasn’t an enjoyable mix, which is why Brogdon initially stepped away. It was a tough balancing act, but the reduction of races made things much easier, as did the opportunity to work with Elite Motorsports.

He believes there’s plenty of life left in Pro Stock and Brogdon said the schedule reduction will entice other drivers to come back to the class.

But Brogdon’s return isn’t about recreation. He’s there to win and have success, and linking up with the Elite Motorsports team, which already has Enders, Jeg Coughlin Jr. and Alex Laughlin in Pro Stock provides a great chance to be competitive. Brogdon believes it won’t take long, either, and is anxious to get the season started at next week’s Winternationals in Pomona.

“I’m very confident we can come out and be successful and if I was Richard, I would be very glad to have me because I’m another guy who can go out there and win races for the Elite bunch,” Brogdon said. “I wouldn’t be surprised if the Elite cars won half of them this year.”