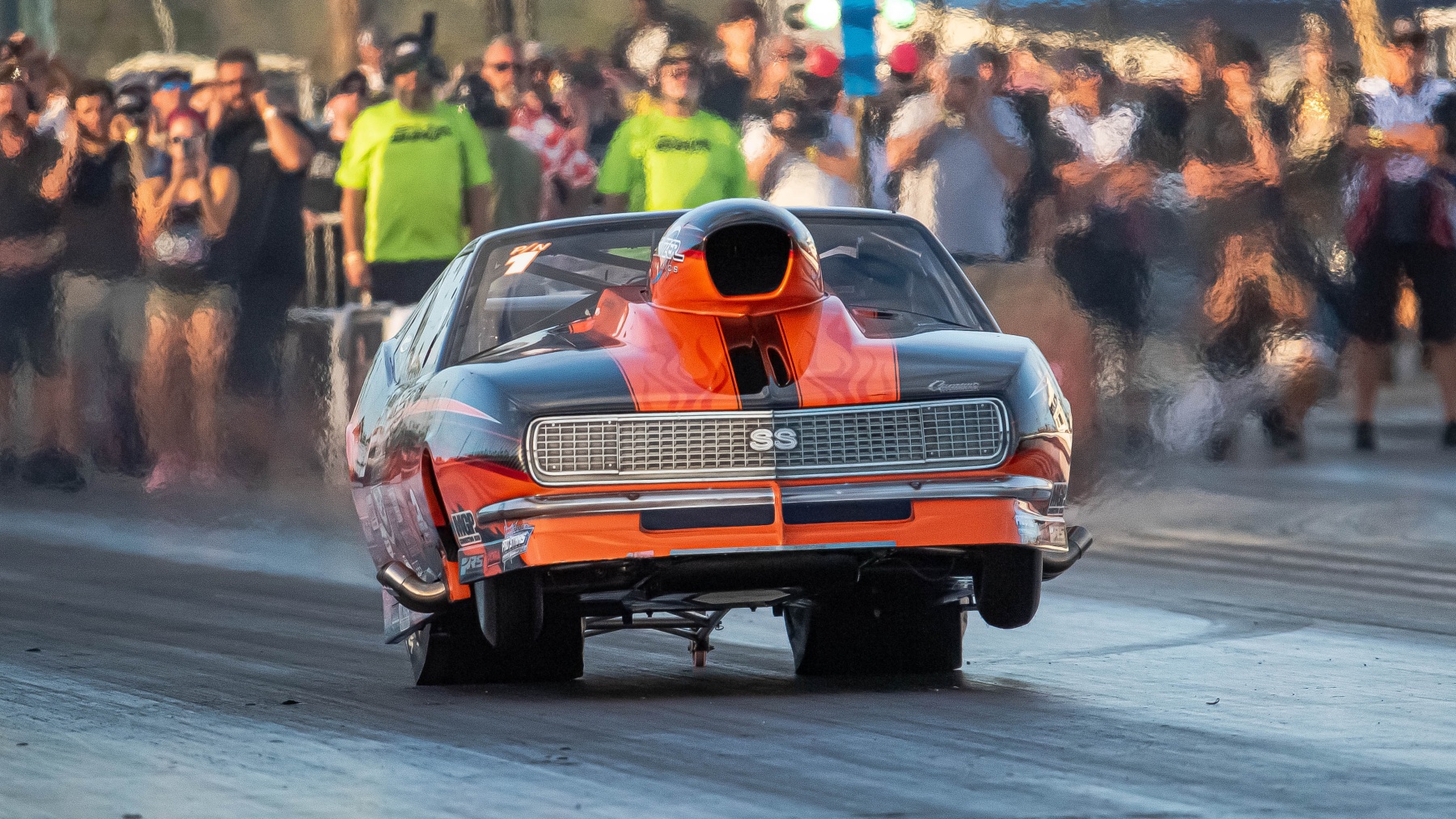 Jim Halsey went into race day as one of just two nitrous-assisted drivers who qualified in the 32-car field packed full of boosted cars driven by standouts like 2022 PDRA Pro Boost world champion Todd Tutterow and defending Snowbirds winner Melanie Salemi. After qualifying No. 5 in the stacked field, Halsey marched through eliminations to face Jason Lee in the final round. There, Lee left the starting line first, but Halsey’s Fulton-powered “Daddy Shark” ’68 Camaro powered ahead to win with a 3.627-second pass at 208.36 MPH over Lee’s 3.673 at 204.23.

“For us, [nitrous] is all we know,” Halsey said. “To beat Jason Lee, he’s a Radial vs. the World champion. People like that, Melanie, Todd, Brandon Snider, all these guys – there were some badass racers in this field today. To come out with a win, it means a whole lot. It’s tough out here. It took some luck, maybe some skill too.”

On Lee’s side of the ladder, he drove Eric Gustafson’s ProCharged Coast Packing Company “Lard Machine” ’69 Camaro to a 3.665 victory over Scott Quesenberry. He used a 3.69 to beat Brandon Pesz’s 3.729 in the second round, then stepped up to a 3.657 to knock out fellow Radial vs. the World hitter Ken Quartuccio and his 3.681. In the semifinals, Lee posted a 3.671 to defeat past PDRA Pro Extreme world champion Brandon Snider, who lifted to a 6.118.

Earlier in the day, track owner Victor Alvarez announced that the winner of the Snowbird Outlaw Nationals in Outlaw Pro Mod would earn an invite to the 2023 Drag Illustrated World Series of Pro Mod, March 3-5, at BMP. Halsey was already on the invite list, so he’ll definitely be back at Bradenton in March to race for the $100,000 winner-take-all prize, possibly with a new look.

“I have a new car and it’s in the paint shop,” Halsey said. “Maybe it’ll be done or maybe it won’t be done by then. If we get time to test it, we might bring two cars. It’s hard to say.”

“They deserve it all,” Halsey said. “We had the engine apart three times today. It’s what we have to do to keep up with these Pro Boost cars. But it paid off.”

Three-time NHRA Top Fuel world champion and former Pro Stock Motorcycle standout Antron Brown had never made a pass in Manny Buginga’s ProCharged “Fred” ’03 Mustang before this weekend, but he quickly hit his stride in the radial-tired ride at the Snowbirds. He qualified No. 2 and ran in the 3.70s in all four rounds, including a 3.713 at 201.91 to beat Marcus “the Axman” Birt and his 3.73 in the final round.

“I’ll tell you what, this was the biggest Christmas present I could have – a race car that runs like that,” said Brown, who thanked Buginga, tuner Jamie Miller, and the whole Team Buginga crew. “All I could do was mess it up. With that being said, going into that final round, I knew I had to tune up a little bit. My lights haven’t been where I want them to be. I staged shallow every time and the most I could get out was like low .050s. I looked at Jamie and I said, ‘You better tune this joker up,’ and he did. They set it up and we had enough to hold [Birt] off by four thou.”

While this weekend was Brown’s first appearance in outlaw radial racing, he was quick to note that it won’t be his last.

“I want to come back and try it again,” said Brown, a three-time winner in Top Fuel this season. “I just want to get better. It was an awesome day. I had a blast racing this race car and racing with this family. They’ve got a family over there. They’re really great people. Man, it brought me back to my roots in drag racing.”

X275 veteran Kenny Hubbard made it look easy with his consistently quick ProCharged ’74 Nova, but the Texan fought through adversity to get the Snowbirds win. After dealing with some parts breakage early in the week, Hubbard went on to run a string of 4.19s on his way to the final round. He stepped up in the final, leaving first and running a 4.16 at 171.31 to beat Justin Palmer’s 4.191 at 168.94.

“It was unbelievable,” Hubbard said. “I’ve never been here. I’ve always wanted to come, it’s just such a far trip for us – 16 hours. After I won the [Extreme 275] championship at the Orlando race, we were gonna go straight to Vegas [for the Street Car Supernationals]. We ended up hurting the motor [in Orlando] and we didn’t have time to go straight there. We freshened the motor last week and we got here, first pull on a test pass we break the converter and break the transmission. Luckily, Micke and Chance got us fixed up on parts, next-day-aired us some stuff. I get support from so many people. I couldn’t do it without these guys. It brought tears to my eyes for sure. It’s unbelievable.”

Alan Drinkwater’s Outlaw 632 rookie season started off with a win at the PDRA season opener earlier this spring. He bookended the season with another win, his second consecutive victory in his native Florida, when he defeated two-time PDRA Pro 632 world champion Dillon Voss in an all-clutch-equipped final round. Voss went red by .029, while Drinkwater recorded a 4.179 at 170.08 in Kenny Floyd’s naturally aspirated ’04 Ford Escort.

“We really didn’t realize how hard it was to win until we got further into the season,” said Drinkwater, who won the World Street Nationals in Orlando. “We didn’t win another race until we came down here to Florida. It took us a little bit of time to get used to the prep – it’s a little different than the PDRA prep, but we’ve got a handle on it now. To win back-to-back, it’s amazing. I can’t thank Kenny Floyd enough for giving me the opportunity to drive; Johnny Pluchino for his tuning abilities; and the team, Preston, Mike, and Jay. It’s a big team effort. I wish those guys could get more recognition. I just play a small part in the whole deal. It’s a blast.”

Complete results can be found on the Bradenton Motorsports Park Facebook page.

The stars of Outlaw Pro Mod and drag radial racing will return to Bradenton Motorsports Park on Jan. 26-29, 2023 for the U.S. Street Nationals presented by M&M Transmission.