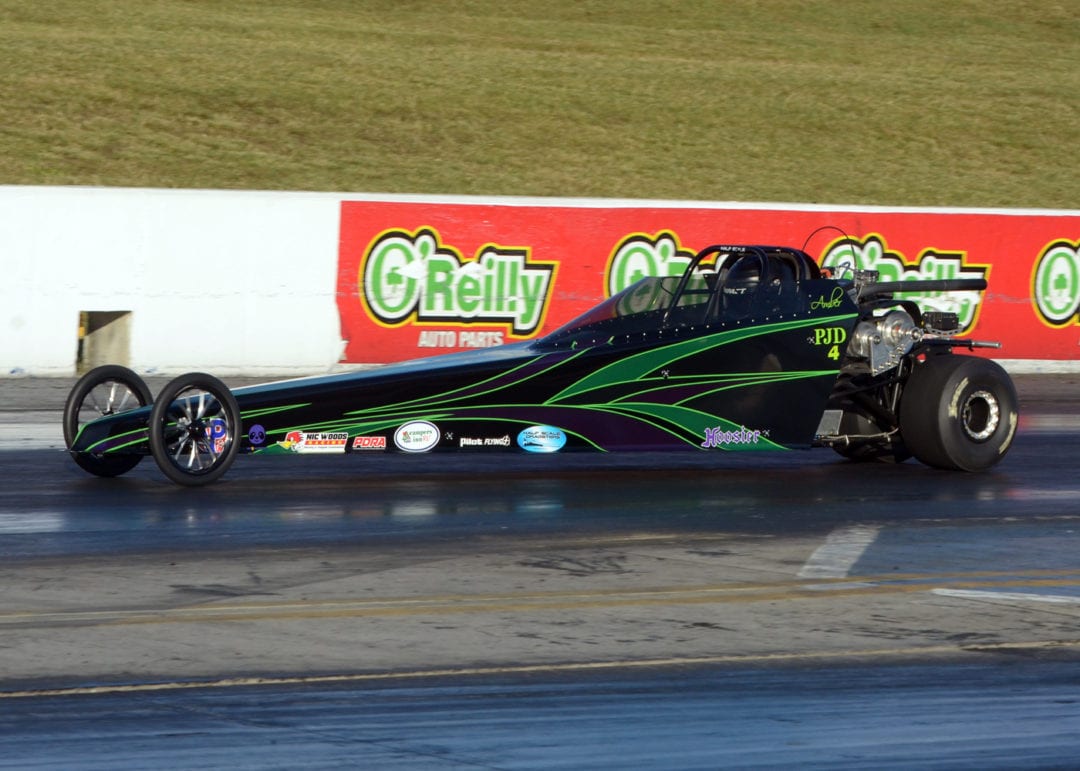 It was quite a year for the Franklin family. Hot of his 2016 Pro Nitrous Championship, Tommy Franklin continued his winning ways. His eldest daughter, Amber, followed closely in his footsteps and the youngest Franklin, Ashley, did incredibly well in her first year behind the wheel.

While Tommy and Amber have often shared final round appearances at the races – including three times in 2017 alone – a double-win has eluded them. There was something bigger in store for them, however. The father/daughter duo won it all together as the 2017 Switzer Dynamics Pro Nitrous World Champion and the 2017 Campers Inn RV Pro Junior Dragster World Champion.

Amber had such an incredible season, she wrapped her championship up even before the second to last race was over.

“This season was, by far, my best season ever,” said the 15 year old Virginia native. “We started off the year with a final round and then did it again at the second race. I didn’t qualify at Darlington, which didn’t necessarily set us back, but it made us see how hard we needed to push. We went to semis in Maryland and then we came to Indy. I absolutely love Indy. That’s one of my favorite cities. I was on my practice tree at home a lot before Indy, trying to get myself ready for that race. I knew how special it would be to win that race and then we did it. Winning at Indy was a dream come true.”

Two races remained, but Amber only needed one more to secure her championship. She had quite a distance between her and the second and third place racers, already. As the race went on, it became certain Amber would be the 2017 World Champion.

“It was the biggest celebration when I knew I had the championship,” Amber recalled. “It was a crazy moment. We were all freaking out. Our junior community is the best racing family out there. Even though we compete against each other they all came up congratulating me. People drove down there specifically to come say congratulations.”

Amber ended up going to her fourth final at that event, putting a decisive exclamation point on her championship. One race later, Tommy locked up his championship as well.

“Witnessing my dad’s championship last year was a huge moment for us. That was my dad’s first Pro Nitrous championship and he had been trying really hard. I felt so proud of him and so happy for him and proud of our team. Winning my own championship, I realize how blessed and thankful I am for it because of the people that put in the work to get me here. I definitely would not have been able to do it without our crew and my parents and all those that support us.

“I want to thank my dad, for everything that he does for me. He’s taught me everything I know about racing from the basics to all the skills it takes to win. My mom, for always supporting and being there to run us when my dad can’t. My sister, definitely. She’s always running around trying to help. All of our crew – Chris Murray, Todd Wilcox, Chase Murray – for all their help at the race track or between races. My boyfriend, Blake. He’s always there supporting and helps if he’s goes out before me. My cousin, Crystal, works for the PDRA but is always supporting and being a big help. And all of our family and friends back at home. Our sponsors – Franklin Electric, Smartcom Home Technologies, Nick Woods, Half Scale, Hoosier Racing Tires. There’s a whole line of people that make it all worth it.

“Most of all, I give it all back to God, because He’s really the one that brought us here. If he didn’t bless us with what we have, we would not be able to do what we do.”

Amber dedicates this championship to her great-grandfather who passed away in February of this year.

The Franklins can continue to try for their double – or triple! – win next season as all three will continue in their current classes, but, for now, they’re grateful for the incredible success of 2017.

“We’ve been trying so hard for that for last three years now to win at the same time,” Amber continued. “We haven’t been able to get it. We had a few races this year where we were both in the finals, but didn’t pull it off. Then we won the championships together and we were like, ‘Wow, maybe God had a bigger plan for us. Instead of just a race we got championships together.’ It was pretty neat.”