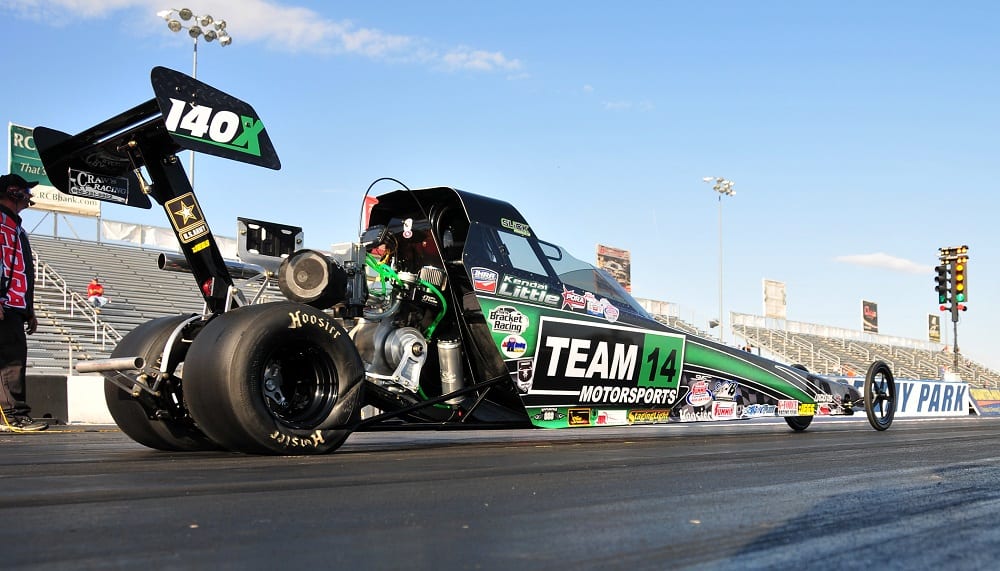 Although the PDRA Pro and Top Junior Dragster categories are made up of competitors who range in age from 8 to 17, they take their sport no less seriously than many of the seasoned professionals. In both categories a world championship is on the line, and the PDRA’s youngest competitors are giving it their all in vying for the titles.

Texas racer Kendal Little hasn’t made an appearance at every PDRA event this season, but each time he’s at the track he’s ready to do battle in Talbert Pro Junior Dragster. He came out swinging, winning the first two events of the season. At the most recent stop on the tour, the Memphis Drags, Little found his way to the semis. His consistency in going rounds has given him a slight lead over Virginia’s Amber Franklin, who also went to the semis in Memphis.

Brooklyn Staab took home the first trophy of the year in MegaCorp Top Junior Dragster at Tulsa Raceway Park, but since then it has been a standout year for Mia Schultz. She won both the next stop, the Spring Nationals at Rockingham Dragway and the North South Shootout at Maryland International Raceway, the closest event for the Virginia native. Add to that her two semi final appearances this season (Texas and Memphis) and Schultz has a commanding points lead over Arellyn Garner-Jones, who won the most recent event on the tour, the Memphis Drags.

After Little took home the first two trophies of the season in PJD, Franklin began to battle back as the number one qualifier at the Texas Nationals. She looked to win it all there, working her way to the finals. However, she would be denied her first win of the season as Ty Casey turned on the win light. Ty nearly shared the winner’s circle with his brother, Trace, who scored a runner up finish in TJD at the Texas Nationals. Trent Augustyn took home top honors in TJD there.

Libby Ledford made her single appearance this year in PJD count by winning the Summer Nationals at US 131 Motorsports Park in June. She beat fellow Michigander, Samuel Peterson in the final, both of them effectively utilizing a home court advantage to take out the PDRA regulars. In TJD, Maximus Butcher gave the win over to Alex Kish with his red light start. Butcher’s three appearances this season have been enough to earn him a fourth place standing in the points with just three events left.

As the PDRA entered into the hottest months of the year, Junior Dragster drivers continued to turn up the heat themselves. At the North South Shootout at Maryland International Raceway Cory Gulitti won the PJD title over Jarrod Kissinger. Gulitti’s efforts this season currently have him sitting fourth in PJD points. Mia Schultz got her second TJD win of the season in Maryland thanks to a red light from Brayden Davis in the final round.

At the most recent stop on the PDRA tour, the Memphis Drags at Memphis International Raceway, Courtney Howard earned the PJD title over Regan Jordan. Howard also has two semi final appearances to her credit this year and currently sits third in points. In TJD, Schultz was once again in the final round, but this time she turned on the red light and Arellyn Garner-Jones took home the trophy.

With three races left to gather points, the PJD Championship battle is heating up. Although Little and Franklin are topping the points, the top five are all close enough to make a bid in these last three events. Complete PJD points standings can be found here.

While Schultz has a substantial lead in TJD, there is still time for Garner-Jones to make up the ground between the two. After finishing second in points last season, Schultz will no doubt be working harder than ever to ensure she doesn’t wear the number two again. View TJD points standings here.

As the PDRA descends upon the completely renovated GALOT Motorsports Park for this weekend’s Dragstock XIII, PDRA Junior Dragster points leaders will have to battle local opponents with a home track advantage in order to hold on to their championship hopes. Watch the event live at www.motormaniatv.com.