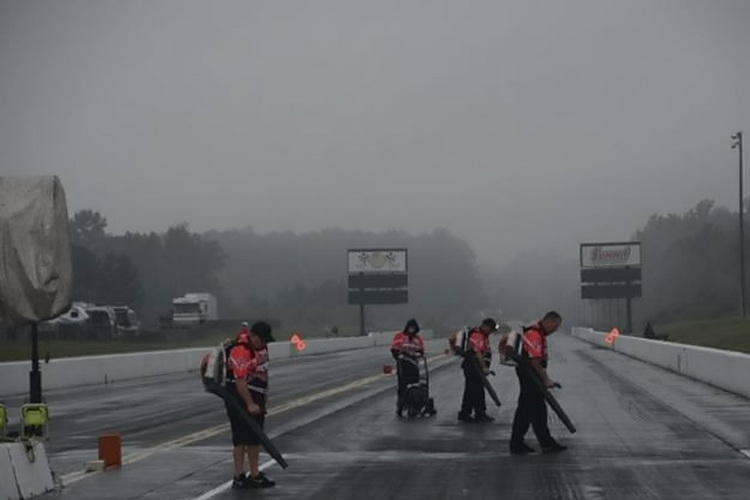 Despite extensive track drying and preparation efforts by the Professional Drag Racers Association (PDRA), not one car was able to make a pass down the eighth mile on Saturday at Virginia Motorsports Park (VMP).

After rain washed away Friday night’s scheduled qualifying session for the inaugural PDRA Championship Finals, persistent light showers and misting continued throughout Saturday at the track just south of Richmond. Cale and Cody Crispe, also known as the PDRA’s “Traction Twins,” led a day-long effort to whip the track into shape, but about 6:30 p.m. the call was made to postpone qualifying, as well as previously delayed elimination rounds due to rain from the previous PDRA event last month at Rockingham, NC.

“Our guys worked as hard as they could to get the track ready, but in the end it just got too cold to be safe for racing,” PDRA Director Bob Harris said. “We’re obviously disappointed at not getting any runs in today, but the safety of our racers has to come first and if it’s not ready, it’s not ready. We don’t want to end the season on a bad note just because we were trying to fit in a few extra runs.”

The plan for Sunday–the event originally was scheduled to finish Saturday night–calls for a 10 a.m. start of two rounds of qualifying with the postponed eliminations from Rockingham run within them, then all the Rockingham finals followed by as many elimination rounds for the 2014 PDRA Championship Finals as possible before running up against the track’s 11 p.m. curfew.

“I know it’s a lot to get into one day, but weather permitting we’ll do our best and anything we don’t get finished tomorrow we’ll have to stay until Monday for,” Harris said. “It’s unfortunate, but we need to finish these two races and finish out the season.”

The PDRA will honor its 2014 champions from 7 p.m. to midnight at the inaugural PDRA Championship Banquet and Awards Show Dec. 13, at the JW Marriott in downtown Indianapolis, held in conjunction with the annual PRI trade show.