Drag-racing’s tough and highly competitive doorslammer categories have had many stars over the years, but perhaps one of the most successful and internationally recognized is Pat “Popeye” Musi. And now the championship-winning engine builder is throwing his hat in the ring with the newly formed Professional Drag Racers Association (PDRA).

“This season we will be paying contingency for racers who run our engines in PDRA  Pro Nitrous, Top Sportsman and Top Dragster,” Musi said. “We are really dedicated to supporting the PDRA and eighth-mile racers because we feel that it’s a venue that is really important.” 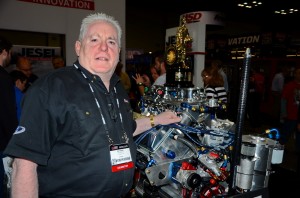 Musi, who until recently was based in New Jersey, opened his first speed shop in 1970 and began racing Pro Stock four years later. From then on he carved out a career that saw him win eight Pro Street championships as well as garner numerous wins in other classes, including Pro Stock and Pro Modified.

Proving that this truly is a family affair, Musi’s 23-year-old daughter Lizzy is now following in her dad’s footsteps. After two years in Top Sportsman, Lizzy has moved up to the PDRA’s Pro Nitrous class for 2014.

“We started running EFI back in 1996, and back then we were the lone soldier; nobody wanted to hear about it.” Musi said. “These days a lot of people who wouldn’t have considered running EFI a few years ago are trying to figure out what we’re doing to get the kind of performance results we’re achieving, but I have to say that with us it’s not just the EFI, it’s the whole program. We do everything in-house – nothing leaves the shop that isn’t totally done by us.

“One of the things we offer is total customer support,” Musi added. “We don’t just send you out there with an engine. We have on-track support, and racers that are in our customer group all work together and help each other. That has been a huge part of the success we are having.

“We have been working hard on it, believe me. We made the fastest nitrous run of all time recently when one of our guys, Khalid Mohammed, made a pass of 3.70 at 202 (mph) in the eighth-mile down in Qatar. We tested and ran in the Middle East for six weeks, and everything we learned is working out real well for us.”

Musi is looking forward to the PDRA season getting underway Apr. 3-6, at Rockingham Dragway.

“We are going to be on-site at every race this season to support our customers,” he said. “We will be able to service any Musi engine because we will have a full inventory of parts available for our customers. We will also be able to fully service any Jesel parts right at the track.

“There aren’t enough places to race these cars, and there are a lot of nitrous cars out there,” Musi added. “I think what the PDRA is doing is a great thing and I want to help them all I can.”

The PDRA appreciates his support, too.

“Having Pat Musi Racing Engines involved as a contingency sponsor this year really enhances the PDRA program and offers valuable support to a lot of racers,” said Bob Harris, PDRA Race Director. “Companies like this make it possible for PDRA to provide the best racing experience possible for everyone.”