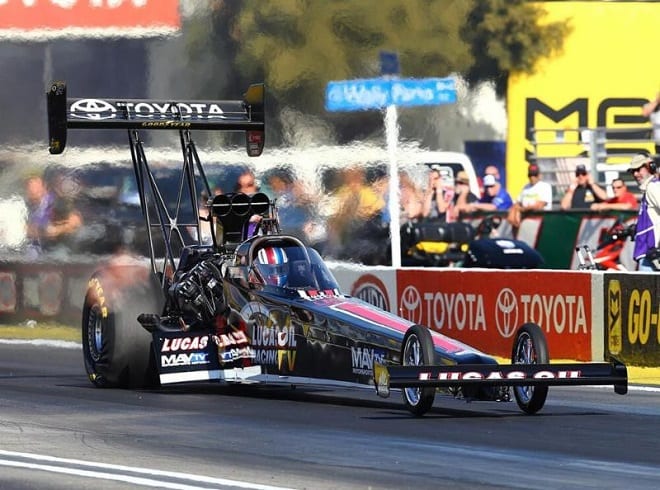 Despite racing a part-time schedule over the last two-plus seasons, Morgan Lucas has performed nothing like a part-time driver.

The Lucas Oil Racing TV driver has won three times and has an 18-12 round-win record in the 15 races he has participated in since stepping back from full-time competition. And one of those victories was at the prestigious U.S. Nationals at Lucas Oil Raceway in Indianapolis.

So as the NHRA Mello Yello Drag Racing Series heads to the NHRA Gatornationals this weekend at Gainesville Raceway, Lucas will definitely be a threat to win in the Top Fuel class, even though it’s his second event of 2016 while everyone else has raced twice already.

“Racing part-time is different because you race with a different mentality,” Lucas said. “I feel like in order to be a good driver you have to race with a sense of purpose, whether it’s your competitive edge or your fear of failure or whatever it is. You have to have something that motivates you to be consistent and where you need to be mentally.”

Lucas remains sharp behind the wheel despite not racing every weekend. At the season opener in Pomona, Calif., he left first on both his opponents with reaction times of .045- and .076-second. His first-round victory over Dave Connolly came in a pedalfest, proving Lucas still has the chops behind the wheel.

“The amount of years I’ve been doing it, the amount of experience I have, I’ve still found so many ways to suck on the starting line,” Lucas said. “It still happens, but you just have to know how to feel and you have to be in that right mindset.

“If you look at a professional golfer, the amount of pressure they have in such a simple job, just to hit that ball, it’s so easy to overthink. It’s just like driving a race car and trying to achieve the optimal reaction time. You have to be in a good state of mind, and you have to hold on to whatever it is that drives you to be good.”

Lucas is a 12-time winner in his career, which dates to 2004, and he’ll be chasing his second victory at the prestigious Gatornationals. He won here in 2012 in a rain-delayed race, making quick laps all Monday to secure the victory.

“Gainesville is a fun race,” Lucas said. “The fans are great, the turnout is always excellent. It’s beautiful there and has great oxygen from all the trees around it. Gainesville is a fun environment, no matter how you look at it. We had the good fortune to win there in 2012 and ran great doing it. When we started thinking about this part-time schedule, geographically, it works out. It makes sense.

“It’s also the Gators. There’s a lot of prestige in that, as far as the history. Kenny Bernstein broke the 300-mph barrier there in ’92, and that makes it a special place you can go to.”