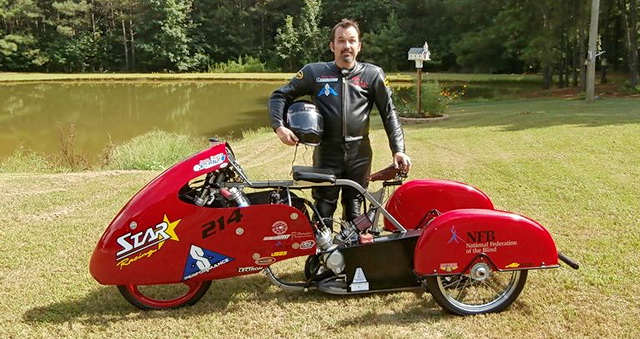 The National Federation of the Blind (NFB) announced Aug. 21, its sponsorship of the first attempt by a blind driver to independently race a motorcycle on the famed Bonneville Salt Flats.

Dan Parker (above), an experienced race car builder and driver who lost his sight as the result of a Pro Modified racing accident last year, will independently operate a three-wheeled motorcycle with the help of a GPS system that gives him audible cues in order to help him maintain a straight course. 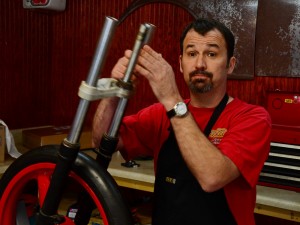 Parker will make his run as part of the 2013 BUB Motorcycle Speed Trials Aug. 25, at the Flats. The National Federation of the Blind is one of several sponsors contributing funds and equipment to help Parker complete his “Quest for the Salt.” Additionally, the Federation’s Mark Riccobono, the first blind person to drive a vehicle without the assistance of a sighted person, will travel to Bonneville to participate in the historic event.

“We have demonstrated that it is possible for a blind person to operate a vehicle with the help of an interface that can convey information about the driver’s environment,” NFB President Dr. Marc Maurer said.

“Dan Parker is taking the concepts that we pioneered with our Blind Driver Challenge a step further—and possibly faster—while continuing to experiment with technology that may someday allow blind drivers to navigate America’s roadways like our sighted peers.  We are pleased to sponsor Dan’s effort and wish him a successful run on the Bonneville Salt Flats.”

Parker, the 2005 ADRL Pro Nitrous world champion, departed early Aug. 21, on the 30-hour drive to Bonneville with a crew of three. 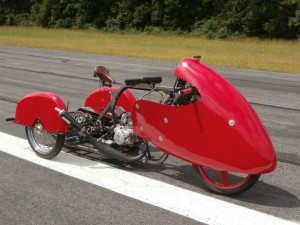 “As a member, I appreciate the support of the National Federation of the Blind, an organization that believes, as I do, that blind people can succeed in whatever effort we choose with the proper tools and training,” he said.

“I look forward to demonstrating this truth to the racing community and the general public on the Salt Flats this weekend.  I view this run as just the first leg of my journey to contribute to the work of the Federation and its Blind Driver Challenge.”

On January 29, 2011, NFB’s Mark Riccobono became the first blind person to operate a vehicle on the Daytona International Speedway as a demonstration of technology that helped him navigate the course and avoid obstacles.

More information about the NFB Blind Driver Challenge™, along with information about Dan Parker’s Quest for the Salt, is available at www.blinddriverchallenge.org.  Also be sure to visit Dan Parker’s Quest for the Salt Facebook page, as well as the NFB’s Facebook and Twitter feeds, for continuous updates on this exciting event.