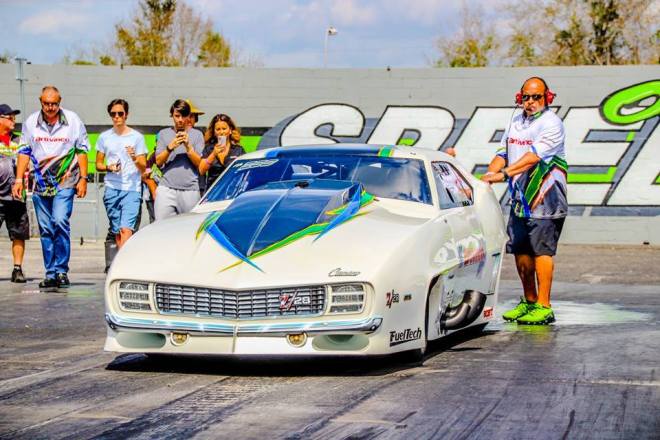 How? Well, his phone hasn’t stopped ringing since the race was announced earlier this week.

“I’ve gotten calls from people all over the world. My phone is blowing up. It’s going to be wild,” Moya said.

Boasting a rich heritage of doorslammer racing dating back nearly three decades, Moya believes the World Doorslammer Nationals has the chance to raise the bar to an incredible level.

Pro Mod and Pro Stock will be the feature attractions and the winners in each class will earn $50,000, a spectacular way to get the 2020 race season started – a number that may well increase before the event actually happens.

Less than an hour away from Orlando Speed World Dragway is Daytona International Speedway, where NASCAR starts its season with the biggest race of the year. Moya and Drag Illustrated have their sights set on a similar impact in Pro Mod, which starts its NHRA season the following week, and Pro Stock, which will arrive in Orlando just two races into its NHRA year.

“I just think these guys are going to just let it all hang out,” Moya said. “In NASCAR, the Daytona 500 is the biggest race of the year. People say, ‘How can you have your Super Bowl the beginning of the year,’ but it works for NASCAR and hopefully this becomes something that works for us where it’s their Super Bowl for Pro Stock and Pro Mod, and they can open their year in a big way. It’s just good for everybody involved and it’s going to be game on for everyone.”

Game on – and a $50,000 payday on an exquisite track surface prepped by Wade Rich – means nothing will be held back in Orlando.

That’s the way Buck wants it, and it’s what he remembers being a trademark of the track, which first played host to the Orlando World Street Nationals starting in 1993. It’s an event that created a stir in the sport, and Buck believes this race will extend that tradition – and then some.

“I went to the Orlando World Street Nationals in 2005 and in many ways, it was the event that started at all for me. Almost 15 years later, I’m going down there to plant my flag, and to be a part of that tradition of these spectacle type events that people travel from far and away to go to,” Buck said. “It’s about as surreal of an experience as can be imagined. To think about going down there and putting on a race at that track – a venue that has seen so much history and had so much impact – it’s absolutely crazy. I’m so excited it hurts.”

The buzz is already significant, and the excitement from fans and drivers is palpable. Moya would know, as he annually puts on a number of big shows at his array of tracks. This one is shaping to be something special, especially as the stars of Pro Stock descend upon the track for the first time in a race format.

“It’s going to be something historic here for Orlando Speed World Dragway. Being able to bring these Pro Stockers here for the first time ever for a $50,000 shootout, it’s amazing for that class and for the Pro Mods,” Moya said. “I’m excited to bring that to Orlando. I think it’s going to become a yearly thing and I think the sky’s the limit.”

Pro Mod and Pro Stock will share the spotlight as the A-list headliners, and all the top names in the class will be on hand, including reigning world champs Stevie “Fast” Jackson in Pro Mod and Erica Enders in Pro Stock, as well as a host of other massive names. It’s the perfect fit for Orlando, which is known for showcasing door cars and doing so on a large stage.

“It’s what we consider our Top Fuel or Funny Car. That’s Pro Mods and Pro Stocks for us. They’re the superstars of the show.”

That’s music to Buck’s ears, and he’s ready to watch the high-stakes action unfold in record-breaking fashion. He fully expects records to fall in both classes as everyone swings for the fences through qualifying, which will include two sessions on Friday and three on Saturday before Sunday’s eliminations, putting on a show even Orlando Speed World Dragway hasn’t seen in its illustrious history.

“Ozzy Moya, Wade Rich, and the whole team at Orlando, they are all-in on this event. They share the desire to turn this event into a marquee, can’t-miss, must-attend event for fans and racers alike. All the ingredients are there. Everything that we need to be there is there,” Buck said.

“Ozzy puts on a lot of big races, a lot of big events. But it is my belief and my true intent to make this the biggest happening for drag racing Orlando has ever seen. I don’t know any other way. It’s all or nothing with us. I want to add to the Orlando memory bank, make it one of those, ‘I was there in 2020’ moments and I’m forever grateful to have the opportunity to do so.”