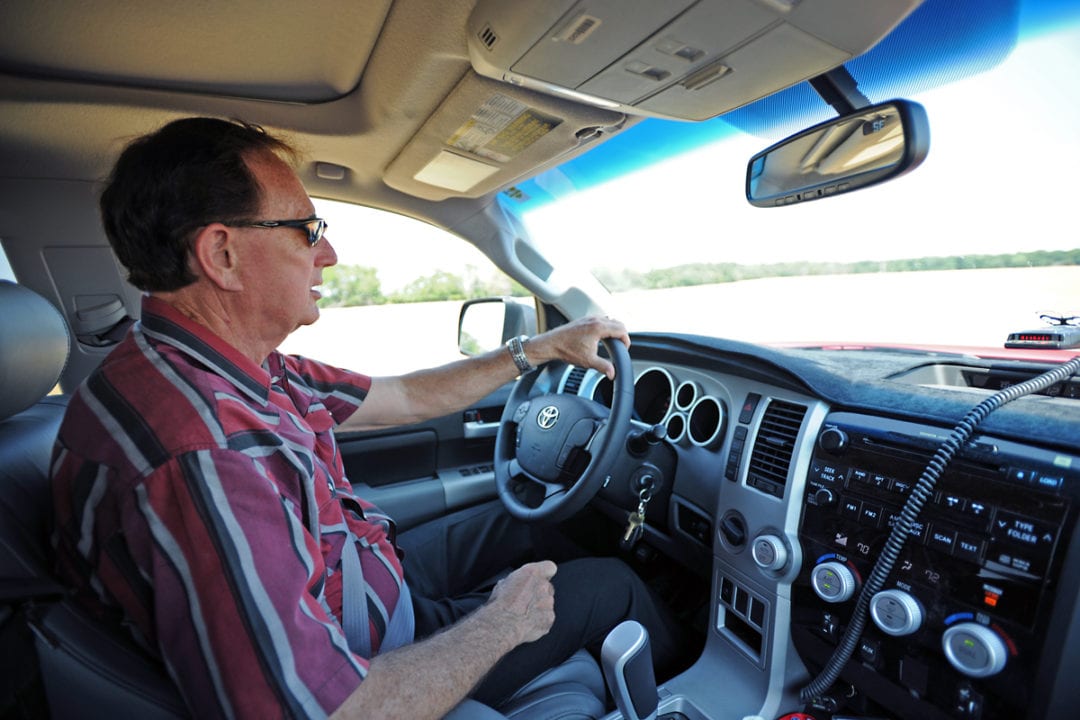 (Editor’s Note: Before founding Lucas Oil Products, Forrest Lucas was a truck driver, becoming the first person in the United States to get a full 48-state license with the authority to haul in all the lower 48 states after the deregulation of the trucking industry in 1980. He moved his business to California and developed better lubricants for his trucks and as they say, the rest is history. He remains heavily invested in the wellbeing of the industry, and he is very concerned about what the mandatory electronic logging devices will do to the sport of drag racing and our country’s economy.)

I am writing this article because I think the requirement of an Electronic Logging Device (ELD) for almost all CLD drivers is wrong. Sure, the big trucking firms with thousands of trucks on the road want to move to computerized record keeping. Let them. But what may work for the big guys is a looming disaster for the middle- and small-sized firms.

For example, an ELD for race teams does not make any practical sense at all. Yet, if the drivers haul their cars more than 150 miles from their home more than eight days a month, they have to get an ELD. Truck logs were never intended to be a safety measure and will be even less so with ELDs. The original purpose of the driver logs was to protect drivers from being forced to work when their mental and physical well-being called for a break. ELDs will not reduce highway crashes due to distracted driving, impaired driving, or car drivers who do not know how to drive around other vehicles. Drivers will have to adopt unsafe practices such as driving when they really need a break when the mandate is fully in effect. The numbers are clear that less than one percent of the highway deaths are caused currently by large truck driver fatigue. But beating the ELD clock will force drivers to drive whether they feel like driving or need a break. The irony is that the safety argument for ELDs is really not true. More accurately, the ELDs should be seen as an anti-safety device.

The government says, “Electronic logging device (ELD) means a device or technology that automatically records a driver’s driving time and facilitates the accurate recording of the driver’s hours of service, and that meets the requirements of subpart B of this part. ELD record means a record of duty status, recorded on an ELD, that reflects the data elements that an ELD must capture.”

That information can be kept on a piece of paper a whole lot cheaper than buying a piece of fancy technology and paying monthly charges so some computer can prepare and send reports for a government agency that cannot manage its own technology. That agency has been told by the Government Accounting Office (GAO) that its technology is lousy. Fleet Owner describes the July 2017 GAO report on Federal Motor Carrier Safety Administration’s (FMCSA) information technology systems, its ability to effectively use budgetary funds, and to meet users’ needs as “scathing.”

Besides questioning the point of putting an ELD on a truck when paper works, I don’t think the ELD technology is developed enough to do what everyone says it will do.  The Federal Motor Carrier Safety Administration has not written required standards for the ELDs and is allowing vendors to self-certify that the device will meet whatever standards the agency finally adopts. At the September 2017 FTR Transportation Conference in Indianapolis, the attendees were warned that some of those who are transitioning to ELDs may be facing unexpected problems. Issues include lost productivity, driver turnover, customer expectations, the availability of ELD units, and even whether or not the units will perform as advertised—and as required by the regulations.

Speakers such as carrier safety consultant and former Federal Motor Carrier Safety Administrator Annette Sandberg stated, “We’re going to start to see a lot of activity in this area. I’m getting a lot of questions from carriers about how to implement quickly, what vendors to pick,” Sandberg said. “But my biggest concern, as a former regulator, is the number of ELD vendors that are currently on the FMCSA ELD list that probably shouldn’t be.”

She reported being asked to work with a 3,000-truck carrier that was concerned “something wasn’t quite right” with the ELDs it had installed. “It was apparent at the end of the first day that this device should never have been self-certified,” Sandberg said. “It wasn’t even minimally compliant with the automatic on-board recording device regulation that’s been in effect for 20 years.”

It should not be surprising that the self-certification process has allowed some noncompliant devices in the marketplace when even the agency that is supposed to manage the device standards cannot tell you what it is going to require when it gets around to writing the standards.

Drivers and companies are being asked to play blind man’s bluff in more ways than the choosing and buying of the ELDs. They cannot be sure about the fairness or even the predictability of the enforcement of the regulations. Speaking of fairness, you might want to wade through the regulations. They are free on the internet for anyone to read, and they are about as clear as mud.

ELDs will not reduce paper work. The devices are so unreliable that FMCSA has kept the requirement to carry the paper logs for use in the event of ELD failure, as well as eight supporting documents, even after December 18, 2017, date for the new regulations.

Make no mistake! The ELD technology does nothing to advance highway safety; rather it is a stealth “revenue enhancement” for the state and federal governments. This ploy will increase revenue for state governments through fines and costs on the trucking industry, which will pass the costs to the unsuspecting consumer or go broke.

The cost of shipping by truck overall is expected to increase in 2018 as capacity further tightens.

“The combination of multiple hurricanes, strengthening spot market conditions, and the final push towards ELD implementation means trucking is ready to shift into a higher gear,” explained Jonathan Starks, COO. “…Spot rates were up double-digits versus last year before the hurricanes hit and have surged further since then.” When you add in the productivity reductions as ELDs are fully implemented, shipping costs are going to increase. The only question is by how much?

In addition to an adverse impact on racing teams and truck drivers by the premature imposition of the ELD mandate before the devices are really ready for use in law enforcement, the economic impact is likely to be severe on certain communities and areas. I worry about what it may do to race attendance and participation.

The requirement of the ELD in areas of spotty or complete lack of cell tower service will make shipping services for rural and remote communities more expensive and difficult to obtain. Draw a circle of 150 miles around major shipping centers. Those communities outside the 150 miles are where the ELDs mandate will most likely harm the economy. Within the circle of 150 miles of the truck home port, if the driver does not leave the area more than eight days a month, the ELD will not be required and paper logs remain legal. That does not mean shipping costs will not increase, but the increase is likely to be less onerous.

Last but not least, the ELD threatens the economy of the entire country by placing an undue burden of increased shipping costs without improvement in services. It is an invisible “you do not see it coming” equivalent of a sales tax increase of seven percent. The stealth attack on consumers’ wallets is underway – the consumers will never know what happened. Estimates vary, but a conservative estimate is that ELDs will increase the cost of shipping products by seven percent, which then will cause an increase in sales price of the products. Sales prices determine the amount of sales tax and the states (except for Montana) will collect more taxes. The consumer will pay more for products and more for taxes and never know what happened!

Drag racing teams are not exempt. They do not have any waivers from the increased costs of products and transportation hassles of ELDs to and from the race tracks.

Call the White House and send tweet storms to President Trump to #delayELD.