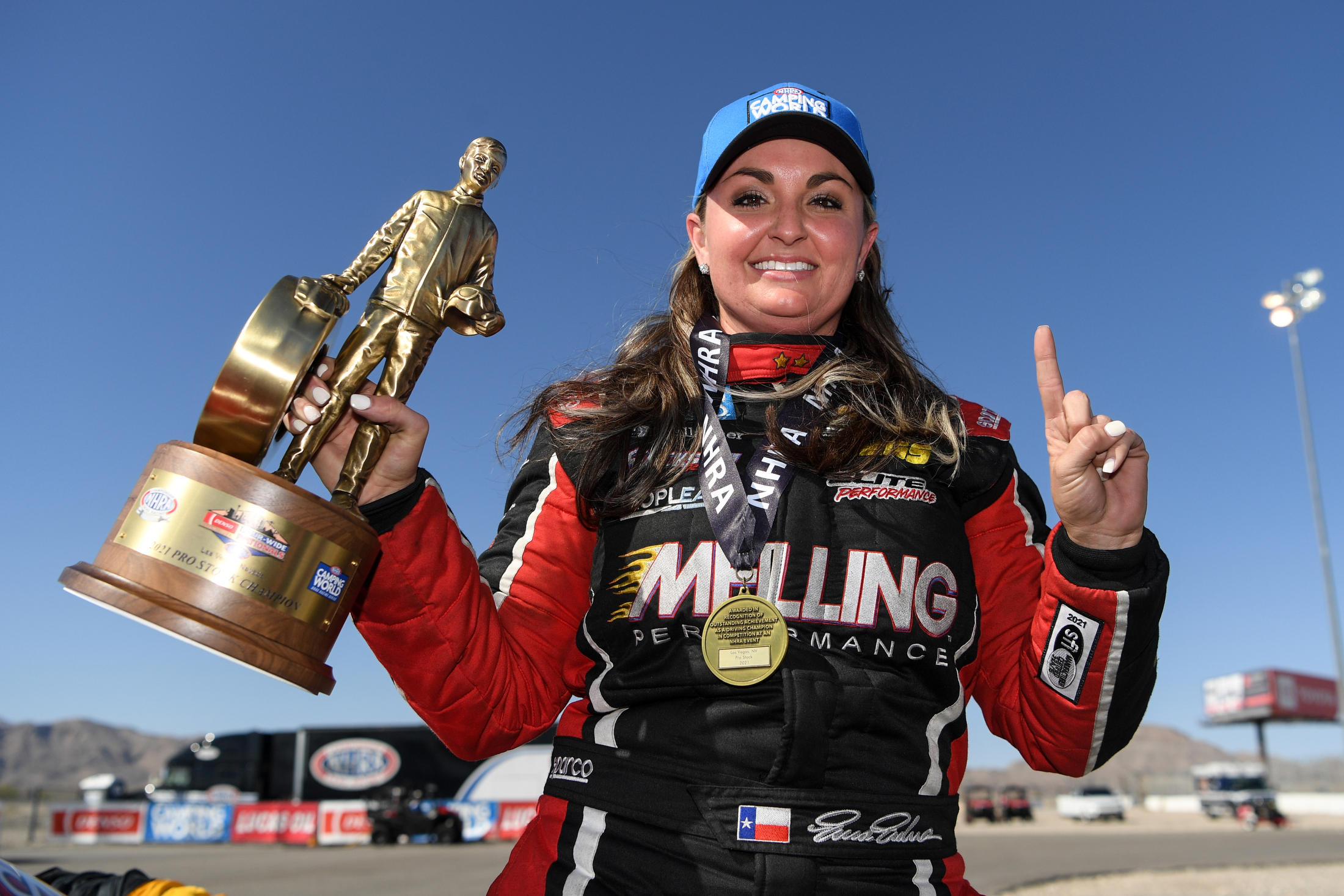 Sunday, April 18th, at The Strip at Las Vegas Motor Speedway, Erica Enders won the NHRA Camping World Series Pro Stock race in her 300th career start. It was her eighth win and second straight at Vegas and her 30th overall in the class. She is currently at the top of the standings as she defends her fourth title. It’s well beyond the time to drop a certain qualifier from her name when speaking of drag racing greatness.

Don’t act like you don’t know what I’m talking about.

“For a girl, she’s had an amazing racing career.”

“Easily, the best girl racer ever.”

That “girl” is eighth on the career Pro Stock win list behind Mike Edwards and Kurt Johnson, both with 40 apiece. That “girl” is ahead of three-time champ Darrell Alderman and his 28 Wallys. Her four titles tie her with Greg Anderson and Lee Shepherd, with only Bob Glidden, Warren Johnson, and Jeg Coughlin Jr. having earned more NHRA doorslammer championships. 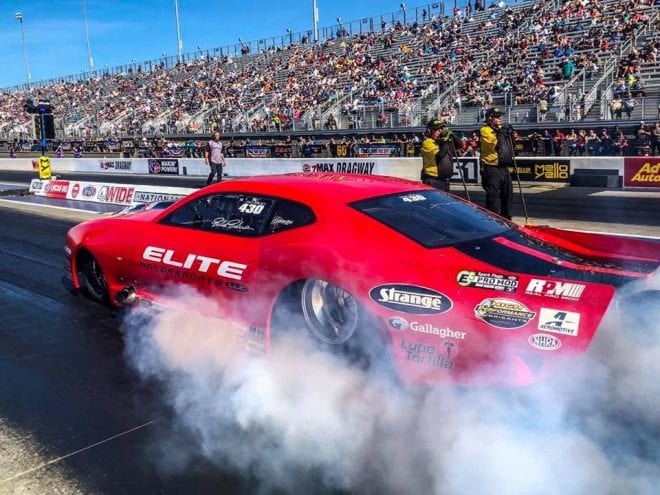 So to recap: Top 10 in career wins, top 5 in career titles. And then, just for kicks, she decided to jump into a Pro Mod in 2018 where she would later set the class speed record, which still stands. Gender has nothing to do with it.

Innate badassery, on the other hand

Let’s look at last week’s Vegas win. Enders barely made it into the show, qualifying 13th on her final run. Knowing she had to climb a mountain, Enders slapped the visor down, gripped the wheel, and proceeded to do what she does nearly every single time she edges her hot rod to the lights: shut down the emotion and let skill, instinct, and an insatiable hunger for the win light take over. After taking E1, the Texan needed a holeshot to get to the finals. Enders’ win from the 13th spot was the deepest qualifying effort to win in Pro Stock since 2006.

But that’s one race and one early in the season, to boot. What about when it really counts? What has EE done in the big moments? Well, earning her third championship in 2019 meant she had to win the event, which she did, giving her the title by a thin 21-point margin over Jeggy, the fourth-narrowest PS championship margin in NHRA history.

So she can win with grace. The sign of a champ is dealing with adversity. How has Erica dealt with the valleys of the sport? After a fast start in her rookie season of 2005, where she was nominated for rookie of the year and earned eight round wins and followed by a final-round appearance and ten more round wins the next year, Enders began several years of either sporadic starts or no starts at all. She returned in 2011 to earn two poles and three final-round appearances, breaking out in ’12 to earn her historic first-ever class win, along with three more. Enders also qualified for the playoffs, finishing a then-career best of fourth in the final standings. Winning races, winning all-star events, setting both speed and ET records followed her as Erica won her first two titles back-to-back in 2014 and 2015.

And then, the wins dried up. Enders’ next three years were frustrating. A ninth-place finish in 2016 with nary a Wally. One victory in each of the next two years. There were whispers. There was talk.

Flash in the pan.

Over the course of those three seasons, the spotlight burned hot on Erica for all the wrong reasons. She never flinched. She never cast blame. She never faltered. Champions weather the storms because of their big picture awareness. Racers through the years who may have been greats or hall-of-fame level competitors burned out quickly because they were unable to deal with the low points of the sport. They didn’t have the patience to ride out the bad times; winning is awesome and easy to ride out. The bad times are when the immortal are forged. 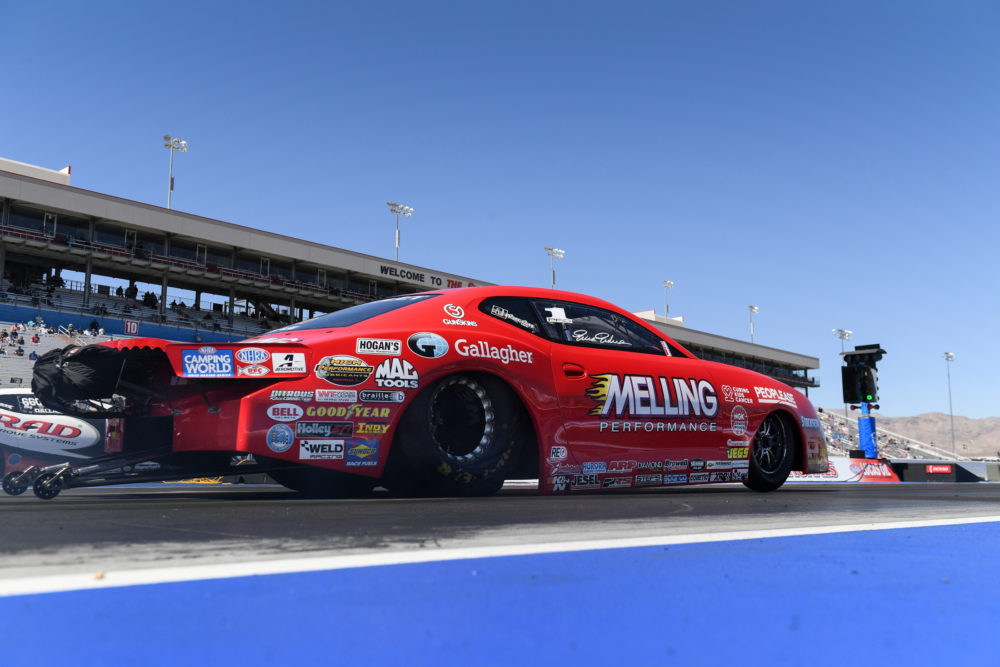 There are always going to be those who dismiss her as just a girl. I’ve talked to a number of her male competitors over the years. Early in the 2010s, there was a lot of “Well, she’s pretty good, but the pressure’s on me not to lose to a girl.” Since then, the greatest doorslammer pilots in the history of drag racing have lost to that girl. Remember when NASCAR champion Kurt Busch made headlines, coming to the Gatornationals to run Pro Stock? Care to take a stab in the dark as to who put him on the trailer after the first round?

Finally, her psychology is next-to-none. EE is no wilting hothouse flower, shrinking from her male competitors, some of whom have been doing this for a very long time and have built up their own legendary game faces. On a stage where racers tend to be unusually friendly and cordial, where harsh words and trash talk is rare, Enders bows to no one. The post-race celebration of her first-ever victory is worthy of a Drake diss track as she had her picture taken with her new Wally at the hauler of the man she beat for the win and her biggest rival, Greg Anderson.

Anderson turned 60 this year. He earned his 95th Pro Stock win at the season-opener in Gainesville. Erica is 37 with the same number of championships as Greg. She’s going to the hall of fame eventually. Several of them, probably. She’s no token. She’s not going to fill out any HOF ballot as the obligatory female in order to satisfy diversity requirements.

She’s Erica Enders and she just sent your ass home.