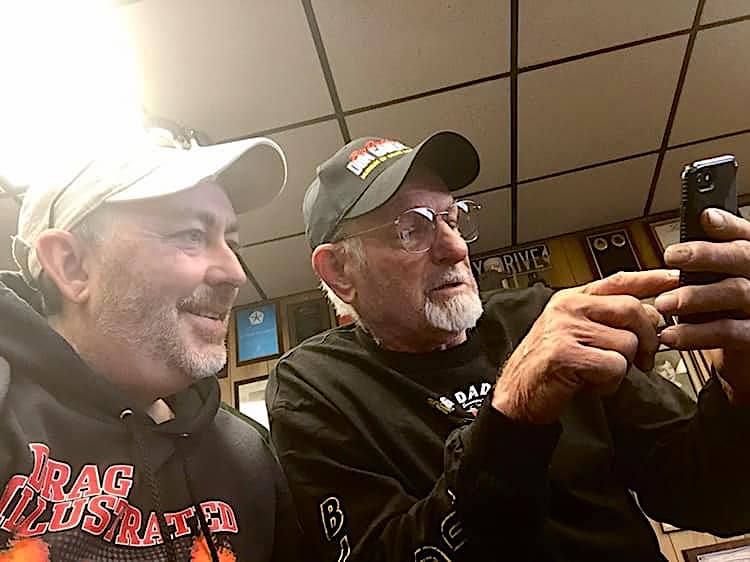 If ever there was a column I wished I had more than just a single page in which to “tell the tale,” my sit-down with Don Garlits last year definitely qualifies. Nevertheless, as the COVID-19 pandemic sidelined my travels for a few months in early 2020, it actually presented a perfect opportunity to revisit the memorable day I spent with the man known as “Big Daddy,” whom I believe to be drag racing’s greatest icon.

It all started in late January 2019 when I sent Garlits an email. He and I had actually corresponded a few times over the years whenever I needed some vintage drag racing info, the kind of stuff I knew he’d have keen insight on, and he never failed to write me back and provide fascinating details for various stories over the years.

The reason for this particular correspondence, however, was to let him know I was traveling to Florida in the coming days and wanted to drop by and visit his legendary Don Garlits Museum of Drag Racing and document the experience in an upcoming column.

I sent the email on a Monday morning, and the following day my phone rang, displaying “Ocala, FL” as the location of the incoming call. I instantly thought, “Oh good, someone from the museum is calling to set up my appointment with Mr. Garlits.” To my amazement, though, the voice on the other end says, “Hello, Van, this is Don Garlits!”

He asked me when I would be arriving in Florida and how much time I’d like to have interviewing him. I told him I’d be there on Thursday and if I could have just 10 minutes with him I’d be happy, as the main thrust of the story (I thought) was going to be about the contents of museum, and I figured I could entertain myself for most of the day looking at cars and taking notes. He explained that the museum opens at 9:00 a.m. daily, and it would be great if I arrived early, since he had a lunch engagement later that day.

As promised, I came rolling in on Thursday morning just as they were unlocking the doors. A staff member ushered me into Don’s office and he was pleased at my punctuality. “You’re right on time!” I remember him saying enthusiastically. He got up from behind his desk, shook my hand and directed me to a pair of wingback leather chairs, where no doubt many visitors before me had been seated alongside Garlits, as he recounted stories of drag racing folklore.

I was amazed when he later told me that some of those visitors include the likes of Muhammed Ali and baseball great Reggie Jackson. Garlits even handed me the autographed bat Jackson gave him as a gift years earlier, directing my attention to the splintered dent in the wooden bat where Reggie connected with a home run, calling it the “sweet spot.”

On the coffee table in front of us lay a stack of hard cover books that Don had been autographing with a Sharpie marker that morning. “These need to be shipped today,” he told me. People routinely order various books and memorabilia from his website, while Facebook also plays a major role in the promotion of the museum. “Social media has been good to us,” he said. “In the beginning I thought it was a waste of time…it was a new technology that I didn’t think would take off the way it did, but I was wrong!” he declared. Garlits was 87 years old when we first sat together last year, so I was reminded of just how vast the technology and advancements he’s experienced has been.

Among the things I ran out of space to include in the first column was a story he told me about a very significant item he regrets is not in his famed museum: the Model T truck his parents drove from New Jersey to Florida when they relocated in 1927. Garlits was born on the same Seffner property in 1932, and eventually inherited it. “It took weeks and weeks just to clear it (this was in 1966) and I threw a lot of stuff away that I shouldn’t have. The Model T was still sitting in the woods and I just junked it. I’m so sick over that!” he told me.

In fact, decades later when he erected the first building on his present-day museum complex, he parted ways with the biggest part of his antique car collection just to fund the project, raising the necessary capital so nothing had to be financed. “I sold cars I treasured,” he shrugged.

The 10-minute interview that I requested eventually spilled over to more than three hours! By now it was lunchtime and he had to leave to fulfill his appointment, but invited me to hang out at the museum and we’d talk more when he returned.

The most memorable stories he told me that day involved his rivalry with Shirley Muldowney during the height of their careers. While it’s common knowledge that Garlits signed off on her license, along with Tommy Ivo and Connie Kalitta, he readily admits he never expected Shirley to pose such a threat as a competitor.

“Truly, in my heart I didn’t feel like she would ever amount to anything,” Garlits said. “A lot of people say they’re gonna come out and do all these wonders – I mean, look, me and a couple other guys made it look easy – but it wasn’t easy and I didn’t think Shirley would do what she did, but she fooled me…she was a champion!”

In the ensuing years came a rivalry that was remorseful at times. A dramatic turn of events came in 1984 when news reached Garlits that Shirley had experienced a horrific crash in Montreal that left her with life-threatening injuries.

“We didn’t expect her to survive, let alone drive again,” remembers Don. “That was the turning point in our relationship, and I never spoke bad about her again, and I asked God to forgive me for anything I said that wasn’t nice.”

Her rehabilitation was lengthy, but when she finally did return, Garlits even joined her team as a tuning consultant. Among his best memories of that era was when Shirley clocked her first 4-second run at Maple Grove in 1989 alongside Joe Amato, which was celebrated as the sport’s first side-by-side 4-second Top Fuel pass.

These days, Garlits says that he and Shirley are the best of friends, and he even whipped out his iPhone and read to me a recent text from Muldowney, in which she signed off by writing, “Love, Shirley.” Suddenly, the magnitude of the moment finally hit home, as I was reminded that I was actually hanging out with Don Garlits, who was reading me a text message from Shirley Muldowney! To commemorate this oddly surreal moment, I too whipped out my iPhone and snapped the selfie pic that appears in this month’s column.

Oh sure, I still hope to someday write a more detailed story about the contents of his one-of-a-kind museum, which is amazing for a variety of reasons, not the least of which is the fact that on display you’ll find the world’s largest Shirley Muldowney collection of race cars and memorabilia.

Every time I ponder the day I spent with Garlits at his museum, I always end up spending far more time recounting those stories he told me, and of course, longing to hear more.