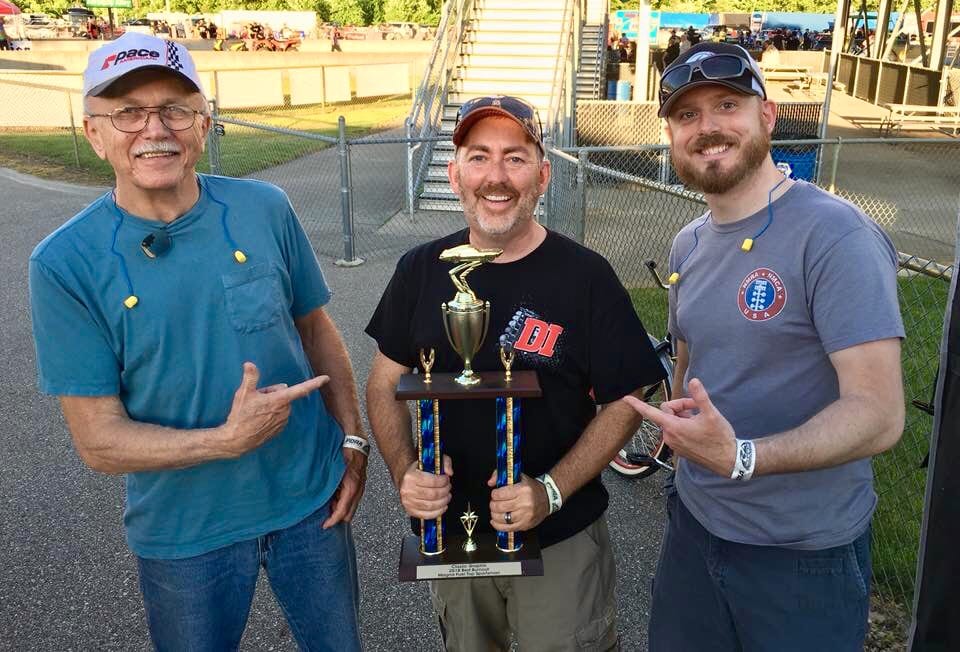 I never imagined the fun I could have with a trophy that clearly wasn’t deserved, but I actually got caught up in the moment and decided to celebrate my bogus award to the fullest! You might have seen this month’s column photo posted on Facebook a few weeks back, and you might have even given it a “like” or posted a congratulatory message after I won the fictitious “Best Appearing Journalist” award. If you happen to be one of those who extended well-wishes for this hoax, I appreciate the sentiment sincerely, but believe me, the real story is much funnier.

Had you zoomed in and closely examined this photo on the internet, the keen eye would have discovered the following words inscribed on the trophy: “MagnaFuel Top Sportsman 2018 Best Burnout Winner,” which is, of course, an award I’m clearly incapable of winning in my current field of expertise. So how in the world did I end up with this trophy, you ask?

Well, to be honest I rescued it from a dumpster at the urging of Scott Bathurst, who actually created the trophy. Scott’s California-based company, Classic Graphix, is not only the official t-shirt supplier of the PDRA, he also crafts some truly exquisite trophies for the series. The thing is, he was completely dissatisfied with the one he originally produced for the aforementioned Burnout Contest, so he elected to do a re-do. Scott was moments away from pitching the trophy into the trash heap when yours truly came rolling up on my golf cart at the recent PDRA Summer Drags in Martin, Michigan. Scott says, “Van, do you want this trophy?” – explaining that either I take it or else it was going into a dumpster in Michigan. I couldn’t bear the thought of that, so I said, “Sure man, I’ll take it home with me.”

Right about then, my friend Larry Puff and his son, Aaron, came strolling up just as Scott was “presenting” me with the trophy. I actually met Larry and his lady friend, Bonnie, in a Battle Creek, Michigan, Denny’s restaurant years earlier, and he’s also a longtime DRAG ILLUSTRATED subscriber. Larry and Aaron were first to congratulate me for my award and even suggested we line up and get a snapshot together with me holding my beautiful new trophy. Naturally, Scott was more than happy to oblige, so he laughingly snapped an iPhone pic of the three of us…with me looking as though I’d done something special.

Within minutes, Larry and Aaron posted the photo on Facebook with a caption they dreamed up about how I won “Best Appearing Journalist” in Michigan. It didn’t take long before the accolades started pouring in! Moments later, the post began receiving “likes” from some of drag racing’s elite members – people who actually deserve to win trophies! In no time at all, news of my “award” began building steam and well-wishes were pouring in from friends, family, former classmates at the elementary school I attended, people I go to church with – even my mother-in-law seemed authentically impressed! It was a full-blown sham alright…and one that I was enjoying rather immensely!

A few of my regular readers commented on Facebook that the award was “well deserved” and “long overdue.” I was starting to blush a little. I wasn’t about to tell folks that it was none other than Larry and Aaron who actually gave my fake award a name, and the trophy I was holding had a bleak future of rotting away in a landfill somewhere!

A few of my friends at the Michigan race knew the “real” story and insisted I tell it over dinner, while everyone roared with laughter. People who heard the real version of the story encouraged me to keep the tale going, so as I was driving the DRAG ILLUSTRATED cargo van through the pits later that evening, people were giving me thumbs up when they saw the trophy riding shot gun, safely buckled beside be. Over the years, I’ve seen so many people post photos of their Wallys buckled in the front seat of their tow rigs after winning an NHRA race, so I decided to do the same thing with my bogus hardware!

From Michigan, I drove to Tulsa, Oklahoma, for the next event with my trophy still riding proudly in the front seat. I guess the old adage about “one man’s junk being another man’s treasure” is true, and so help me, if I never “win” another trophy in my life, I guess I’ll just have to treasure this one!