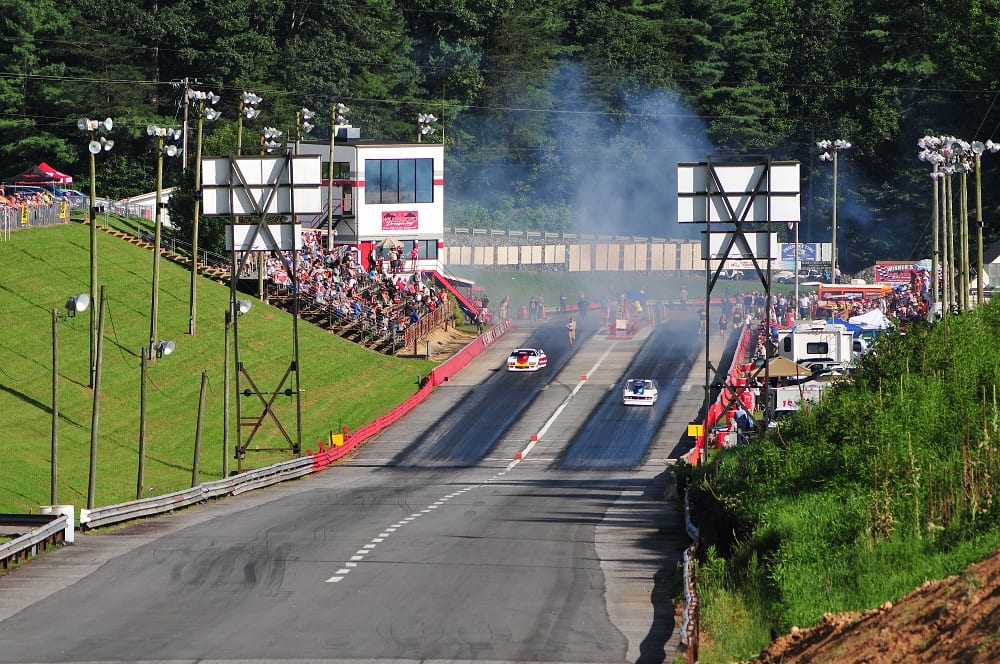 A dear lady named Pat Prout once dreamed of owning a drag strip. But not just any drag strip; it was the one she amazingly fell in love with in 1971—while on her honeymoon! Nestled on the outskirts of a mountainous region of North Carolina, it was a small, country track built in 1955 near the town of North Wilkesboro. Even back then, 45 years ago, and through the starry eyes of a young woman newly married, Pat says the track just felt like home.

Pat was never a frilly girl who fancied pearls and lace, you understand, she liked cars. Fast ones. Her husband, Warren, custom built a variety of Camaros for her over the years. When it was time for Pat to enter the workforce and bring home a portion of the couple’s living, she went to work in a machine shop for 23 years and to this day speaks of all the interesting and fascinating people she met there. She also worked on a road crew for seven years, all the while cultivating an abiding love for cars and racing.

Unfortunately, her life was touched with tragedy in 2010 when Warren was suddenly diagnosed with stage-four cancer. He passed shortly thereafter, prompting Pat to place a call to Holley Performance Products to order a pair of 850 Double Pumpers. Not for a race car, you see, but rather, to use one as an urn for Warren’s ashes and have a matching carb of her own for when that inevitable time comes at the conclusion of her own life. She remembers the sales rep at Holley inquiring about desired jet sizes for the carburetors. “Don’t need them, hon,” she answered. “Gonna’ use these carbs for urns.” The sales rep was understandably stunned, honored and no doubt filled with a few other emotions. “Do you want brand-new carburetors or rebuilt ones?” he asked. Pat pondered on that for a moment, then told him that if she had her preference she’d much rather have a pair that’s had a little gasoline run through them!

You couldn’t hardly dream up a more passionate story than the one Pat Prout lives daily. Over the years she’s driven fast cars across the country, subscribed to car magazines (including the one you’re holding), and never stopped attending drag races—especially those at Wilkesboro Dragway. Then, one fateful night in 2014, track owner Danny Dunn made the announcement that he was shutting the place down. Immediately, Pat felt a tug at her heart. A deeply spiritual soul, she prayed and told God she wanted this track. “Lord, if this is your will for my life, you make it happen and if not, give me the strength to accept your will, not mine.” Those are the words she prayed.

She approached Dunn with a creative offer: “Would you like to swap your track for my house?” she inquired. Danny was curious enough that he went and looked at it. Positioned on a knoll in nearby Boone was Pat’s beautiful home, with windows positioned all around, framing the picturesque mountain views from nearly every angle. Her garage was a sprawling masterpiece of living space that featured a carpeted office, TV, bathroom, and of course, lots of space for hot rods. Her decorative end tables were large, custom cut pieces of glass placed on top of racing slicks, and for chandeliers she had converted three oil cans into light fixtures.

It was the ultimate “woman cave” she said. Her driveway was exactly a quarter mile in length and Pat says she routinely pretended that it was her very own drag strip! Dunn was so impressed he said, “Sure, I’ll swap you my track for your home!” And so the exchange was made. Pat moved out of her stunning mountain paradise and relocated to North Wilkesboro, more specifically, she moved into the concession stand of the drag strip, which had been remodeled years earlier to include living quarters. And she’s never been happier in her life.

Actually, there were several life-changing events that happened within the span of a month. In addition to jointly acquiring the track with drag racer Phil Halbedel, the two were married on the starting line moments before they started calling cars to the lanes. She and Phil exchanged vows while wearing drag racing shirts and red racing jackets! They basically said “I do” not only to each other, but also to the marriage of pouring their devotion into operating this drag strip. “I told Phil that I couldn’t do it alone and neither could he, but we could certainly do it together.”

It should come as no surprise that Pat is the one who has enough passion for the both of them when it comes to owning and operating this track. “I call it my dream; Phil calls it his nightmare!” she laughs. Two years in though, they’re still pretty smitten with the place—and each other. The track signage reads, “Come Play in Our Backyard.” And Pat means that literally. The track is so scenic, in fact, that she and Phil occasionally receive calls from young couples wanting to have their engagement pictures taken there. Pat and Phil welcome them all. “We’re always open,” she smiles.

At 62 years of age, Pat is every ounce the gearhead she’s always been. Whenever Wilkesboro hosts the Classic Gear Jammers organization, Pat insists that one of the drivers take her for a ride in their car, and when I say “ride” I’m talking about high-winding the engine, dumping the clutch and giving Miss Pat a good old fashioned adrenaline rush! She loves it. Her passionate zeal for life in general and especially this drag strip is difficult for some to comprehend.

Then there’s the couple’s appreciation for their staff, which gets expressed often and with genuine sincerity. On a weekly basis she looks her employees straight in the eyes and with heartfelt emotion says, “I love you.” She tells the ticket takers, the water box attendant, the starter and the concession stand workers. “Phil and I couldn’t run this track without each of our employees. They’re our family, we need each and every one of them and I do love them,” she insists. “I whisper a prayer before each and every race that everyone in attendance is kept safe.”

She also describes her feeling as “giddy” whenever she hears the first engine fire. And yes, whenever that unavoidable day arrives, she’s left specific instructions that her remains be placed safely in her Holley carburetor. “Maybe my son would like to put me up on the shelf of his garage whenever he’s working on his car! Or maybe the racers would like to take turns taking me to their house! It’s all good, hon, just as long as I can keep hearing the sound.”

This edition of Van Abernethy’s ‘On The Road’ column originally appeared in Drag Illustrated Issue No. 113, the Crew Chief Issue, in September of 2016.