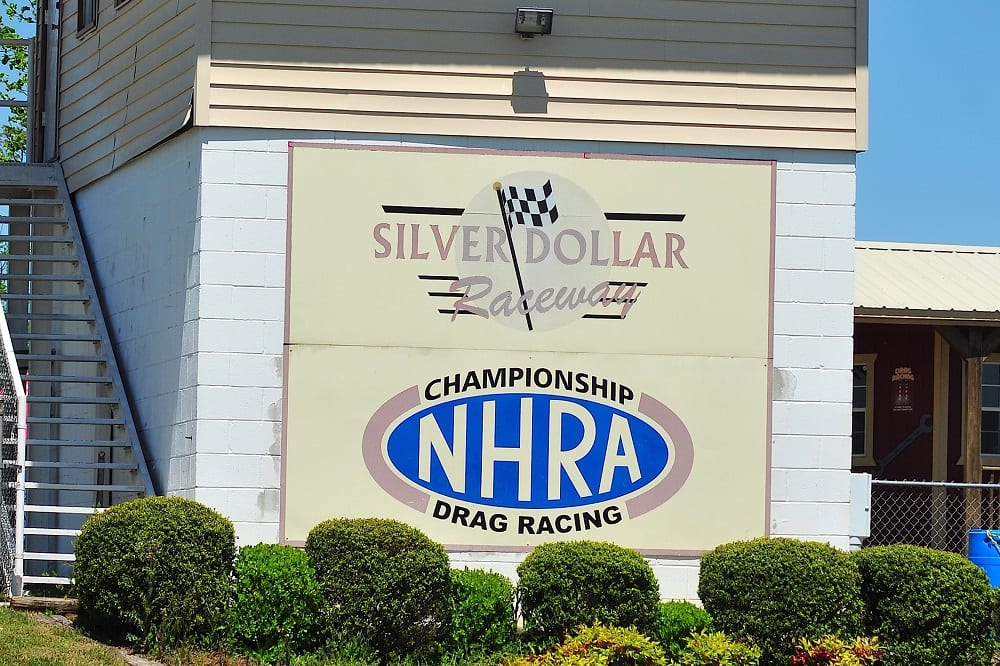 On a warm spring day in 1960, twelve-year-old Ed Swearingen was riding around the family farm with his father as they drove across the rolling hillside in a 1955 Chevrolet. “We were checking on our cows,” Ed vividly recalls. Right about then young Eddie had a brilliant idea. “I told my dad that I thought we had enough room to build a mighty fine drag strip.” Ed’s father replied, “Son, don’t ever bring up that subject again.”

So, within the silent confines of his colorful imagination, the youngster just glanced out the window once more as he visualized race cars roaring across what was then a cotton patch and pasture. It wasn’t until many decades later – years after his father passed away – that Ed seriously even entertained the idea of building a drag strip on the family farm located in the central Georgia town of Reynolds. In 1993, however, he actually put his plan in motion and broke ground on what would become Silver Dollar Raceway, a NHRA sanctioned quarter-mile facility that is indeed located precisely where he imagined it when he was a kid.

Unfortunately, though, Swearingen’s grand opening in April 1994 was unpredictably horrible at best. I mean to say it was unbelievably bad – and that doesn’t even scratch the surface of doing it justice. The opening weekend of this beautiful new facility was to be kicked off with the running of a NHRA Winston divisional meet, and as expected race car haulers began pouring though the gate Thursday and by the following afternoon the place was completely packed. On Saturday, however, it was unavoidably clear that a powerful storm named Hurricane Roberto was going to slam directly into central Georgia. Evacuation measures were being exercised and many racers elected to leave their race cars and haulers right where they were parked in the pits, and hastily travel to the nearest airport to buy the first plane ticket out of Georgia.

One racer in particular who did exactly that was Alcohol Funny Car racer, Tony Bartone, who flew home to his native New York to escape the storm. A few days later Swearingen received a memorable call from Bartone, who told Ed that he was coming to get his race car. “I told Tony that he couldn’t come down here just yet and he says, ‘What do you mean I can’t come down there?’” Ed described the disastrous scene to Bartone as best he could. He spoke of how the roads had been completely washed away. He told of how the area stores had no bread on their shelves. He even gave Bartone an eye-witness account of the eerie scene down at the local funeral home, which had been flooded and their inventory of coffins were now floating all over town. “I said to him, no, Mr. Tony, you simply can’t come down here right now.”

Yes, it was a phenomenally bad situation, but the way Ed Swearingen tells the story of this particular telephone call could potentially have anyone laughing uncontrollably at Ed’s play-by-play abilities. No one could ever tell this story quite like Ed Swearingen tells it. Well, as you may have guessed, central Georgia was declared a disaster area and Ed darn near lost the track before he even got started. The weekly bracket program that he was anticipating went to practically nothing because the area racers suffered such a personal loss from the storm. From there things got tough – really tough.

Ed ended up having to liquidate some assets that he really didn’t intend to part with in order to keep the track in good standings with the bank. It wasn’t until maybe 1997 that things begin to stabilize. In time, though, the town did recover and the racers started showing up in large numbers. Years after his ill-fated grand opening, Swearingen eventually had the opportunity to operate the bustling drag strip that he always imagined – a track that he himself enjoys racing at as much as anyone. He even placed a $50 bounty on himself since, after all, he is the track owner. “I appreciate my racers allowing me to participate, so anyone who beats me gets an extra 50 bucks,” he says with a smile.

He’s made friends all over the country and beyond, both in his personal expeditions as well as racers who travel to Silver Dollar. When he and wife, Dorothy, were married in 2001, they went to Alaska on their honeymoon and wouldn’t you know it, Ed simply had to visit the local drag strip. “We walked through the pits handing out business cards, telling racers that if they ever found themselves in central Georgia to come visit us.” Remarkably, someone walked up to Ed and excitedly proclaimed, “Hey, I’ve been to your track!” The gentleman spoke of how he was in the potato peeling business for Frito Lay, and was transferred to nearby Perry, Georgia, to work in a brand new facility. He was there for 6 months and spent every single weekend at Silver Dollar Raceway.

Ed’s wife, Dorothy, also plays a major role in the activities of the track, most notably by cutting the 80-acres of grass – mainly because she says it doesn’t look good when Ed cuts it. “I bought Dorothy a brand new tractor for her 60th birthday and she’s quite fond of it,” says Ed. “It looks like the greens of a golf course when she cuts it, but when I do it, it looks more like the fairway.”

Ed has a way with words and he can communicate some truly hilarious thoughts, even when it wasn’t his original intention. Take the time he and Dorothy were in Orlando, Florida, at a track operators convention. They gave Ed the podium for a few minutes and he excitedly told those in attendance all the good things he had going on at Silver Dollar with regards to various updates and improvements. Things were going pretty well in his speech until Ed decided to tell them about the local radio DJ that was coming to announce for them – “just as soon as he gets out of the federal penitentiary.” People nearly spewed their beverages at this news. “The crazy part was, I didn’t even mean for it to be funny when I said it but people just roared with laughter.”

Immediately after Ed made the now-famous announcement at the NHRA black tie affair, someone came up to Dorothy and laughingly inquired, “Is Ed for real?” Those who know him just smile and nod. Ed is very much for real. You might even say he’s “genuine realness dispensed in a pure, free base form.”

He’s also 68-years-old now, and he seriously wants to retire from track ownership and experience new adventures. He declares he’s found a buyer for Silver Dollar Raceway and he’s going to sell the track this very summer. “I want to travel,” he told me over breakfast just recently. He very much wants to show Dorothy those “iconic landmarks” she sees on television. He also ponders the excitement of visiting other tracks and racing his 1967 Camaro more than he ever has previously. Most assuredly the stuff dreams are made of.