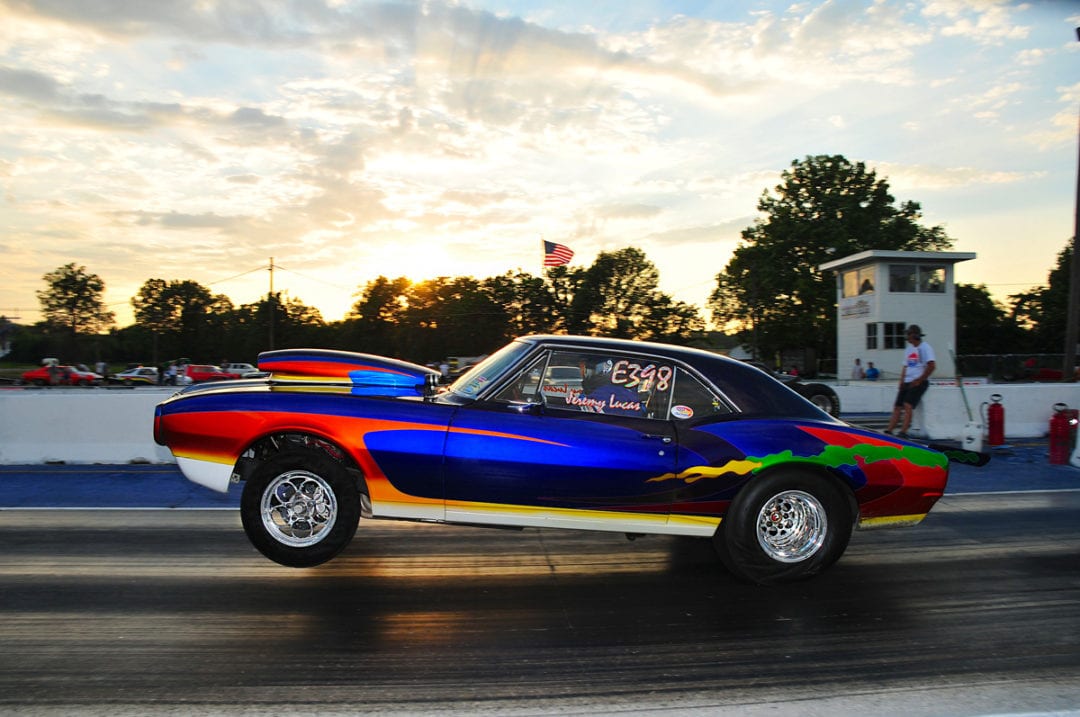 As I travel the country on an almost weekly basis, I see drag strips of all shapes, sizes and conditions. Some are quite large and sprawling and others quaintly modest. Some are corporate owned with huge financial backing, while others are the pride and joy of a family’s life-long dream, often representing a small town legacy of sorts. It’s troubling on a deeply personal level whenever I hear of a drag strip (of any distinction) that has closed down indefinitely, especially if it’s a facility that I never had the opportunity to visit while in operation. To prolong the disappointment, it’s also been my experience that the longer a drag strip sits desolate, the less chance there is of someone showing up to save it from falling down into a heap of irreversible disarray.

Thankfully though, I sometimes hear of a different tale; one that has a much more refreshing outcome that almost always involves an energetic new owner who decided to bring the track back to life. Such is the case concerning a vintage quarter-mile facility located in the southwest tip of Indiana in a town called Chandler. Amazingly, the track had previously operated for 50 years under the ownership and steady guidance of Harold Baker, who once he turned 89-years old faced the daunting reality that he simply didn’t have the energy to operate the track anymore.

The drag strip sat idle for roughly a year before Kevin Baesel approached Mr. Baker about buying the facility and the timing couldn’t have been any more fatefully on cue. Instead of watching his half-century labor of love collapse into a proverbial heap of weeds, Mr. Baker encouraged Kevin (a man nearly 50 years his junior) to take the ball and run with it. Baesel agreed to buy the track in the summer of 2015 and thus breathed new life into its continued operation.

Kevin had many things he wanted to transition, including a name change that would help signify the track had been reopened. He decided upon “Greater Evansville Dragway” and began spreading the word that something great was on the horizon. Of course many things had to be accomplished before Kevin could swing open the gates on a brand-new chapter of this drag strip’s storied life, and while he could have picked any number of areas in which to begin the restoration process, he felt it would best be served to begin with the renovation of the track’s racing surface.

“We ground it down all the way to the quarter-mile mark and made it very smooth,” he says. By all accounts, the track has plenty of bite, as evidenced by Jeremy Lucas (pictured) as he launches hard from the starting line. Next came a brand-new timing system, followed by a massive upgrade to the track’s lighting. Once the very costly main objectives had been addressed, Kevin and his team began slapping paint everywhere that paint may be applied in an effort to simply make the place look vibrant again.

Finally, after many months of watching the track’s condition steadily improve, Greater Evansville held its grand opening in this June. The Outlaw Street Car Association, as well as Street Outlaws television star Tina Pierce, was on hand to kick off the festivities in front of a robust crowd of spectators intent on celebrating the track’s rebirth.

On a regular basis, Greater Evansville Dragway now operates thrice weekly, beginning with a Friday test and tune. The hours of operation on Friday are somewhat different that you might expect, though.

“We open at 6 p.m. on Friday and encourage people to come out and stay with us late,” Baesel says. And when he says “late” he’s talking upwards of 4 a.m. the next morning! Friday’s amusement features open test and tune, grudge racing, fellowshipping and all around good eats at the concession stand, which remains open until the wee hours. In fact, you can stuff your car with as many friends as you can possibly fit and pay $10 for the entire car load, with intentions of making yourselves at home for the next 10 hours if desired. “We close the admission gates at 1 a.m., but we certainly encourage everyone to just stay with us late and enjoy the facility,” he repeats.

On Saturdays the track is open all day for test and tune and a bracket motorcycle race. Sunday’s are reserved for the weekly points bracket race which features Super Pro, Pro, Sportsman and Junior Dragster.

Baesel has strong opinions concerning the necessity of getting young people interested in motorsports again. “I’m not sure where the disconnect happened, but I look out into the pits and it seems like we skipped a couple generations. I see lots of older racers, but very few young ones. It’s like video games have taken over and nobody’s working on cars anymore!”

Kevin stresses he wants that to change. He fondly spoke of a time when his track was well known for its vigorous Junior Dragster program. He feels that revisiting those days is well within the track’s reach. In his view, much of what goes on inside motorsports can be attributed to various “trends” and he sees it changing all the time. For example, most events at Greater Evansville are now contested on the eighth mile, which is just one more area that Kevin feels has been affected by a trend. “I wouldn’t be a bit surprised if drag racing someday trends back to the quarter mile,” he predicts.

While his assessment of the drag racing landscape is shaped by a life-long involvement, his early impressions of owning a drag strip were formed in just the last 12 months. “It’s more work than I ever imagined,” he admits, laughing but with no regrets. “I commend anyone who owns (a track)—especially if they’ve owned it for a long time—because this has been the most stressful time of my life!”

And though the track is currently in the most superb condition of its fabled history, Baesel feels the continued key to success is to never stop dreaming about making the facility better for racers. His track personnel agree wholeheartedly. Jason Lancaster, a longtime friend has been appointed track manager and promoter. A host of other dedicated staff gathers each weekend with a universal goal of making the track better with each passing weekend. “The most important message I’m trying to communicate right now is that we’re here, the track is open again, and it’s in new condition,” Kevin adds.

So, to all the dreamers like Kevin Baesel who’ve unshackled a padlocked drag strip, we salute you. Grateful are the racers, fans and, of course, yours truly, whose unending desire is to continue exploring drag strip gems tucked away in towns all across this great land.