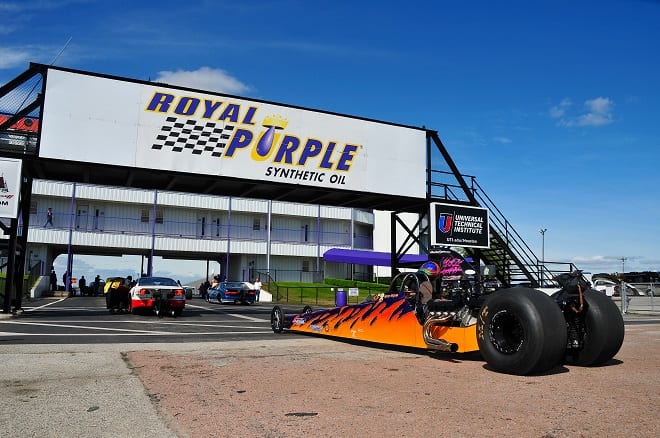 I decided just recently that I don’t spend enough time in Texas! Remarkably, I’ve been secretly harboring a grudge against the entire state for the unlikeliest of reasons: it has too many drag strips! If not for Texas, my home state of North Carolina would be the undisputed leader when it came time to answer the age-old question: “How many drag strips can you cram into a single state?”

Texas, of course, is larger than many nations of the world, but that didn’t seem to matter to me. Oh sure, my home state has more tracks stuffed within a few short miles of each other than any location I know, but still, I found myself giving Texas the cold shoulder as I glanced over the incredibly vast list of tracks that were neatly spread across the Lone Star State. Well, just recently, I decided that I really needed to bury the hatchet and start embracing Texas and all its many places to race.

This change of heart started last March when I was meandering around Louisiana, all the while trying to ignore the fact that I was being tempted to cross the border and drive into Texas. “Maybe I’ll just eat a fine steak and then leave,” I thought. I couldn’t fight the urge any longer; I was gonna’ enjoy a Texas drag strip even if it hair-lipped the governor!

Truthfully, I’ve been there before and had a blast. How could I not? It was probably seven years ago when Royal Purple Raceway hosted an ADRL event, so my wife and I hopped on an airplane and attended the event. When traveling by car, though (or more precisely, the Drag Illustrated Sprinter), it’s a 15 hours-plus drive from my house to the city of Baytown, located just east of Houston. “Distance” is, of course, the honest to goodness reason I don’t visit Texas more often than I do, but I’ve decided that since my monthly column is indeed called “On the Road,” I’m going to enjoy more highway miles this year than I ever have previously, and I was going to start with a return road trip to Baytown.

Although I had visited this track before I really knew nothing of its history until I sat down with its general manager, Seth Angel, and heard the story of how it all unfolded. Royal Purple Raceway (originally named Houston Motorsports Park) was the dream of the late Glenn Angel and his two brothers Greg and Larry. They broke ground in 1988 with the desire to build a first-class, NHRA national event facility, which they accomplished handily.

Seth, Glenn’s son, was quite young when the track opened and he was among the very first participants of the Junior Dragster class when the track first offered it. Through the years, Seth has held every position imaginable at the track, from selling tickets to working tech to eventually becoming the social media guru when the Internet became a mainstream promotion platform. So it’s really no surprise that Seth eventually became GM of the facility his family built and has owned and operated ever since.

Growing up at the track Seth has seen it all, or so it would certainly seem. He’s got a treasure chest full of memories and stories about days gone by, with none more entertaining than the classic Pro Stock final round burn down between Warren Johnson and Scott Geoffrion at the 1994 Slick 50 Nationals. It’s one of the more famous standoffs in drag racing history and Seth was there to see it unfold live.

He recalls the grandstands being packed that day and the fans being worked into a screaming frenzy as Johnson and Geoffrion sat on the starting line with the top bulb on, engines at an idle and neither driver electing to roll forward and turn on the second staging bulb. The standoff seemed to go on forever. That’s when then-NHRA Chief Starter, Buster Couch was growing impatient and with his arms sternly outstretched in the direction of the Christmas tree, he motioned both drivers to stage their cars immediately. And upon that command, neither driver moved an inch! Instead, they just sat there, engines on a low idle with the top bulb burning as the crowd was roaring louder and louder at the sight of this stalemate spectacle.

Seth said he and the fans in the stands were thoroughly enjoying the standoff; Buster on the other hand had seen enough and that’s when he ordered both drivers to kill the engines and told their crew members to roll the cars from the starting line! After Couch had a brief chat with Warren and Scott, the competitors were allowed to re-fire the engines and try this one more time. It honestly looked as though another burn down was going to happen, but finally Johnson revved the engine and bumped the nose of his Oldsmobile into the beams and Geoffrion followed suit in his Dodge Daytona. Scott put a holeshot on WJ, but didn’t have the power to hold off the Oldsmobile and Johnson took the win. While video cameras were rolling in the shutdown area, Warren was hot as a match during his extremely short interview, while Geoffrion was giving W.J. an ear full as he was being towed away!

In case you weren’t there to see this memorable standoff (or the ensuing shutdown area drama) in person or watch it on live TV, never fear, this epic footage is actually a YouTube classic and may be viewed online at any time.

To this day the NHRA national event remains the marquee event of this facility, but for week-to-week happenings at Royal Purple the sportsman competition is fierce and many racers travel hundreds of miles to compete. A total of 14 points-paying bracket races are held during the year from March until August, while a robust schedule of other attractions are on tap when they’re not bracket racing. “We stay busy with all sorts of events for 11 months out of the year and then we all disappear during December and regroup,” laughs Seth.

Well, Texas certainly offers a mighty big place in which to retreat, and as for me, my Texas jealously grudge is officially over. Hey, they’ve got it going on with drag strips and it’s high time I spent more weekends exploring Texas!

This story originally appeared in Drag Illustrated Issue No. 98, the Outlaw Issue, in April of 2015.