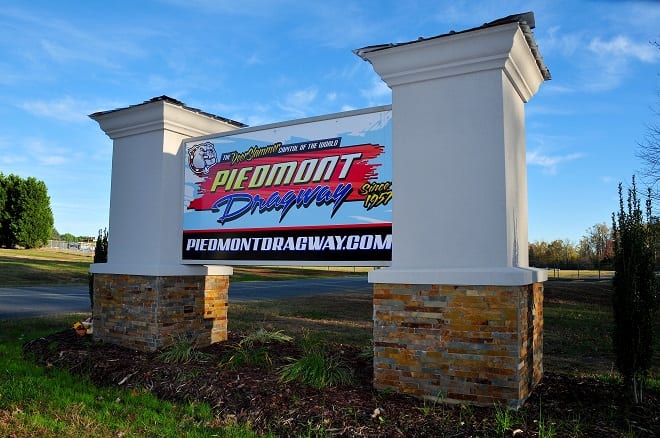 A few years ago I was visiting retired racer and speed shop owner Hank Thomas at his shop in Winston-Salem, North Carolina. Hank always has a fascinating story or two to share about the area’s racing history, the majority of which he experienced firsthand.

What I remember most about this particular visit was when Hank reached over to a bookshelf and picked up a vintage photo for me to examine. The crinkled, black-and-white snap shot depicted a couple of antique cars lined up to race each other on what appeared to be an old dirt road in the country. “Hey, this is cool, Hank, where was this photo taken?” I remember asking him and my jaw hit the floor when he answered, “Piedmont Dragway.” True, not everyone remembers when this tidy and modern eighth-mile facility near Greensboro, North Carolina, was a dirt strip (myself included), but I’ve heard several accounts from people who support Hank’s recollection that this popular track did indeed have a racing surface of dirt in its very early days.

Piedmont Dragway’s current general manager, Kevin Shipmon, has fond memories of the track from the 1970s, as well as knows much older stories passed down from his late father, Sonny Shipmon, who started racing at Piedmont in the early ‘60s. More importantly, though, Kevin says his dad’s life was truly turned in a positive direction because of drag racing.

In the late 1950s not all schools in the south were integrated, and Kevin’s father still attended a segregated black high school where he “was actually a bad kid,” Kevin admits. Sonny’s high school principal noticed a mechanical talent in him, however, and decided to cultivate it. “My dad’s principal actually went out and bought my dad his first race car, which was an old front-engine dragster,” Kevin says. The gift wasn’t without stipulation, though. “Dad had to stay in school, keep his grades up and also keep the school buses in good running condition,” Kevin adds with a laugh.

Fortunately, Sonny made good on his end of the bargain and excelled in school as well as in racing. He eventually grew up to own many race cars and even owned and operated a drag strip in North Carolina at one time before being inducted in 2008 into the North Carolina Drag Racing Hall of Fame. Kevin still owns his father’s old front-engine dragster, as well as his ‘72 Barracuda. “My son, Kyle, actually won Piedmont’s 2015 Real Street championship in dad’s old ‘Cuda last year!” Kevin beams.

Piedmont Dragway no doubt has produced many similar stories of race cars being passed down from generation to generation and treasured memories accumulated as a result. A lot of history surrounds the now-IHRA-sanctioned facility, including its “modernization era” that can be traced back to Jim Turner’s first tenure of ownership from 1982 to 2001. Turner is credited with bringing many structural changes and updates to a then-humble facility and it was also during Jim’s first term at Piedmont that the legendary Big Dog series was born.

Back in 1996, Turner, who at this time jointly owned the track with racer and businessman Bob Harris, saw a magical opportunity begin to unfold when local racers began to gather at Piedmont on Thursday nights during the test-and-tune session to race their Pro Street-style cars in a heads-up fashion. The cars weren’t exactly streetable, but did have some similarities. “They were basically cars that had been back-halved, but still retained things like a factory dash, interior carpet and working headlights; all while running on DOT tires,” Harris recalls. The appeal was obvious and large crowds began to gather and watch the locals battle it out each Thursday night.

Since Turner and Harris saw the potential for an exciting new series, they figured they’d offer a $1,000 payout on the first Thursday night of the month. They were stoked about the idea, although they weren’t exactly sure what to name the new series. “Right about then, Jim and I were sitting up in the office at the track talking about this new Thursday-night shootout when Jim’s wife, Dora, walked into the office and laughingly made the now-famous comment, ‘If you can’t run with the big dogs, stay on the porch!’”

Instantly a light went on and suddenly their new series had an identity, Harris says. “From there it caught on like wildfire!”

Back in its heyday of the early 2000s, each Big Dog race would often attract more than two dozen entries trying to squeeze into an eight-car field. One year at the season finale the track even used a helicopter to fly several of the star drivers to the track, landing on the starting line! On another night the gates had to be locked because of over-crowding and pretty much mayhem in the stands! Even NHRA Funny Car champion Jack Beckman showed up at Piedmont one Thursday night just because he’d heard of the Big Dog phenomenon and had to see it for himself!

A lot has changed with this series over the years in transitioning from a Pro Street theme to purpose-built Pro Mods to the recent announcement that Big Dog will take on a more Top Sportsman identity in 2016. It’s no secret the money it takes to run Pro Mod has become obscene and current track owners Gilmer Hinshaw and Ron Senecal hope to make it more affordable and accessible to local racers while still producing a quality heads-up show. Regardless of the format, there will always be a loyal group of local fans who turnout for the Big Dog experience, especially with 2016 marking the 20th anniversary of the most famous Thursday-night shootout in all of drag racing.

Piedmont’s story is that of multiple transitions over the years and the facility is currently in the most superb condition of its near 60-year existence thanks in part to the support of sponsors like Lucas Oil, ATI, O’Reilly Auto Parts and Speed Pro. In recent years the shutdown has been lengthened, asphalt in the pits expanded and bathrooms remodeled amidst a host of other updates. Even sled pulling and drifting goes on at Piedmont these days!

“That just goes to show you that the times are going to keep changing with or without you,” Shipmon says. “For example, if you’d have told me five years ago that we would be opening the gates and letting kids slide around in the parking lot and call it “drifting,” I’d have said you were crazy!”

As far as evolutionary tales go, it makes me wonder what those racers in Hank Thomas’ old, black-and-white photo would have thought if you’d told them that door cars would one day be running 3.70s at more than 200 mph on the very same drag strip—though with pavement where dirt once sufficed. Time indeed marches on.