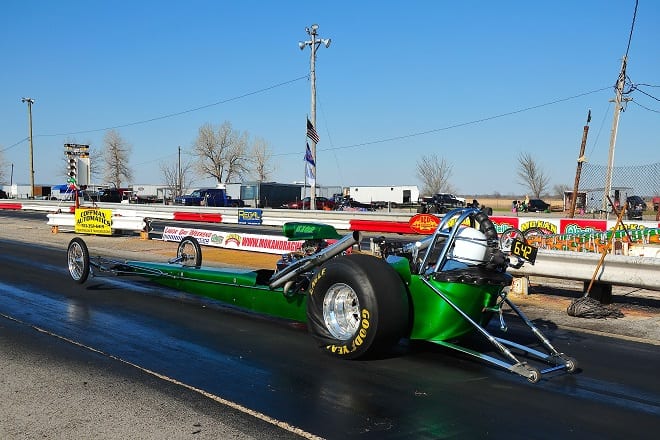 Late one night a number of years ago I was visiting Pro Mod pioneer Charles Carpenter in his Charlotte race shop. I was sitting in an old wooden chair, sipping hot coffee while Charles told me some of his favorite racing memories from a celebrated career now spanning four decades.

This particular evening comes to mind as I write this column because that was the night I first heard of Missouri’s Mo-Kan Dragway when Carpenter spoke of the time he match raced a popular Midwest-based fuel altered known as Dawson’s Demon. The epic doorslammer vs. fuel altered match race was held back in the 1990s and contested on the full quarter mile at Mo-Kan, where track owner Carl Blanton remembers it well. “I can remember when we were putting that event together I asked Charles if he thought it was possible for his legendary ‘55 Chevy to clock a six-second elapsed time here at Mo-Kan and Charles says to me, ‘Man, I could run six seconds down a gravel road!’”

Sure enough, the storied drag racer from North Carolina went south of the seven-second border with a 6.99 blast at over 200 mph before the night was over. The crowd was roaring, track records were shattered and all involved no doubt sold completely out of t-shirts that night! From the first time Charles ever told me that story, I knew one thing was certain; I simply had to visit Mo-Kan Dragway.

Well, it took me quite a few years to finally make the trip, but this March I enjoyed that feeling of nostalgia as I drove through the gates of this fabled drag strip located in the southwest corner of Missouri in a town called Asbury. Having been an enduring attraction for gear heads in the Midwest since 1962, Mo-Kan Dragway celebrates 53 years of continuous operation this season. The track originally opened with AHRA sanction, which was headquartered in Kansas for much of its existence, but after the association faded into obscurity by the mid 1980s, Mo-Kan decided to go unsanctioned for nearly the next 30 years. It wasn’t until IHRA finally lured this longtime outlaw track into their fold in 2014 that Mo-Kan once again became a sanctioned facility. “I feel that IHRA has a lot to offer the sportsman racer,” explains Blanton, who in 1999 bought the lease at Mo-Kan.

Blanton has been an integral part of this track long before he ever took the plunge of ownership, though. As you may have guessed, he was a drag racer before he embarked on anything else, but you may be surprised to learn that he later dabbled in photography and journalism, which eventually turned into a passion so strong, he even published a highly-popular racing newspaper that at one time served a four-state area of the Midwest. “In some form or fashion, be it racing, reporting or managing several tracks, I’ve been going to drag races since 1969,” he declares.

Blanton eventually recruited his son, Craig, to oversee much of the operation of Mo-Kan, and then there’s chief starter Steve Hodge, who has been a fixture at Mo-Kan for longer than anyone (including Steve!) can remember. “It would be hard for me to imagine Mo-Kan Dragway without Steve Hodge out there on the starting line,” Blanton says.

The truly bizarre part of my meeting Steve, though, was the fact that I had unknowingly bought many vintage drag racing T-shirts from him by way of eBay nearly a decade ago; that is, until my wife finally threatened to start selling them off for 25 cents apiece if I didn’t end the obsession! When Steve asked if I remembered buying those shirts and then revealed he was the seller I was absolutely stunned! And when he told me he had plenty more shirts for sale, I could literally feel myself begin to fall off the recovery wagon!

Carl and I sat up in the tower on this mid-March afternoon and he spoke of days gone by and the passions, triumphs and tribulations of operating a drag strip. The story I’ll remember most was an unforgettable tale of sportsmanship, a story that still gives Carl chills when he tells it. It seems a number of years ago Mo-Kan was going into the last event of the season with local racer Danny Rosenthal comfortably ahead in points. The only long shot who had a chance of passing him was Greg Rees, but in order for him to steal the championship Rees needed to win seven rounds of racing! And oh yes, there was one more obstacle; Rosenthal would also have to lose in the first round.

Rees was so much of a long shot, in fact, that people were already congratulating Rosenthal on his championship, but then an improbable string of events begin to unfold. Rosenthal did indeed lose first round that night and Rees remarkably won the next seven and clinched the championship on his last run of the night. But that’s not even what causes Carl’s arm hair to stand on end when he tells the story. “After Greg’s last win light came on, I immediately started heading down to congratulate him, but before I could even reach the winner’s circle, there was Danny Rosenthal kneeling down beside Greg’s dragster congratulating him on the championship that he himself seemingly had in the bag. I will never forget that scene of sportsmanship as long as I live,” Blanton told me.

And so it goes, each and every year, local racers come together at Mo-Kan to create a phenomenally strong and tight-knit bracket program. Blanton compares Mo-Kan Dragway to that familiar corner bar and grill that everybody loves. “Oh sure, I wish I had five-million dollars to make the place all fancy and new, but I don’t, so this place ‘is what it is’ and nothing more,” he says. For the local racers around Asbury, Missouri, though, “this place” is quite simply, home.