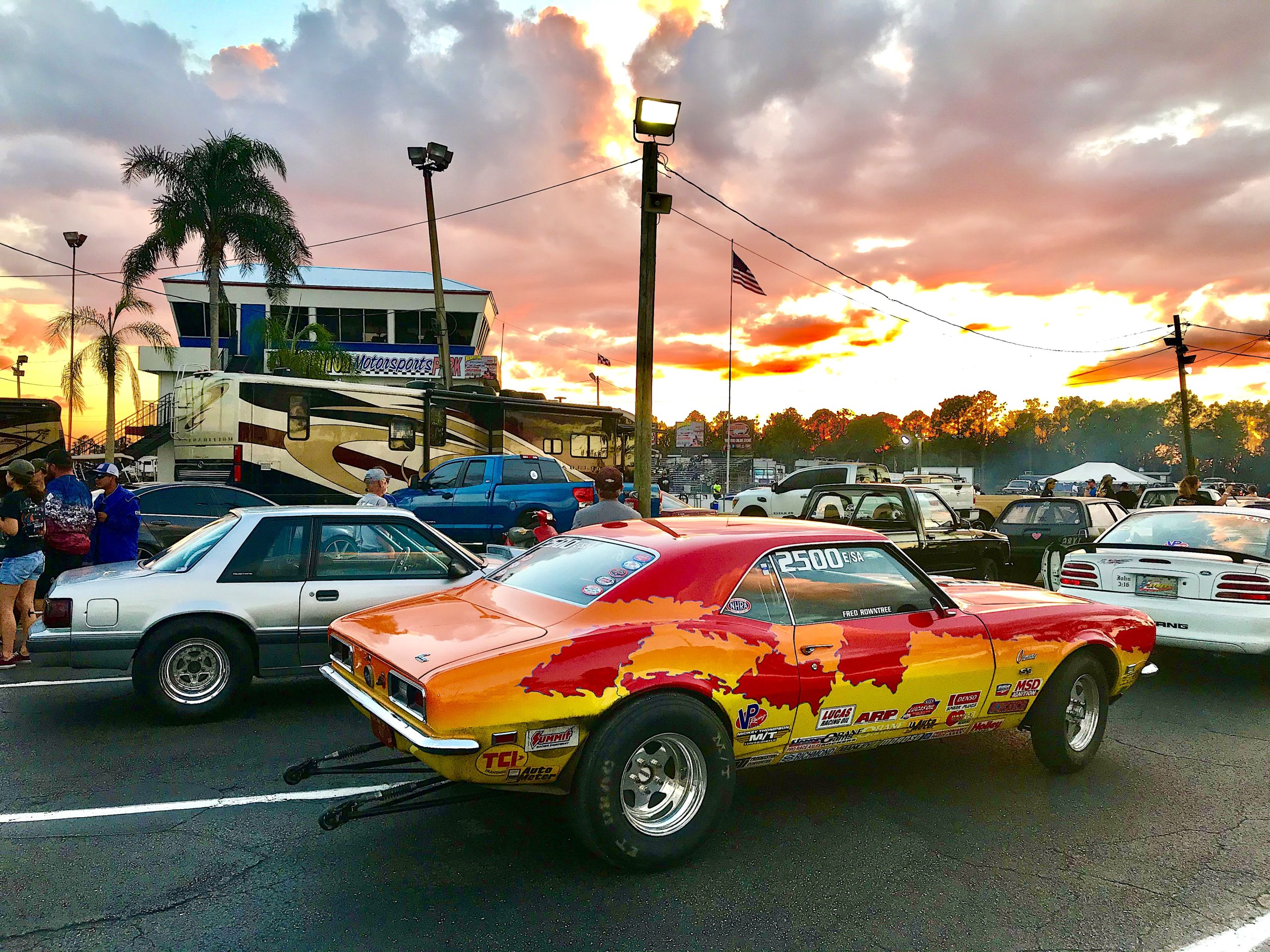 If you’ve ever wanted to journey to Bradenton Motorsports Park to enjoy the legendary Outlaw Snowbird Nationals, the intense sunsets alone should be enough to persuade you to make the trip! When I first began journeying to Florida’s Gulf Coast region just over a decade ago for this awesome event I was stunned at the evening sun’s magnificent presentation. I remember thinking that I had simply arrived on a remarkable weekend all those years ago when this “fire in the sky” began to form.

Amazingly, though, year after year as I travel to Florida, I’ve come to realize that the skies over Bradenton will deliver the goods evening after evening as the setting sun disappears from view.

Furthermore, when much of the country’s racing has come to a screeching halt, the best racing Florida has to offer actually begins in early December with the running of the Outlaw Snowbird Nationals, Bradenton’s marquee event. The Snowbirds race is as old as yours truly, since we both turned 47 in 2019.

Typically, I don’t make my first trek to Florida until December, although I’ll never forget the time back in November 2014 when there was this “polar vortex” getting ready to slam North Carolina with snow, freezing rain and who knows what else, so I called Dave Lansberry down at Bradenton and asked what they had going on that weekend. I told Dave of my impending forecast and he’s like, “Dude, come to Bradenton, it’s gonna be 85 degrees and sunny!” So, I threw some shorts and sunblock in a suitcase and made the quickest-ever trip to Bradenton to enjoy the Southern Nostalgia and Muscle Car Shootout.

I’ve got some great memories of traveling to Bradenton through the years, not the least of which was in 2013 when 37 Pro Mods showed up to enter a 16-car field at the Snowbirds. Keep in mind this was 17 days before Christmas! The turnout was so stellar, track officials decided to offer not one, but a pair of 16-car fields of Pro Mods, which made for a spectacular show.

Another Bradenton highlight for me personally was getting to shoot the Chris Rini cover shot during an early morning photo session in 2015. The posed shot of Rini would be used for the cover of the June 2015 edition of the magazine, which was also Drag Illustrated‘s milestone 100th issue.

I’ve had plenty of light-hearted moments at Bradenton as well, but none compare to the thrill I used to get out of seeing the former track owner, Alan Cherbitz, whenever he’d put on this crazy-looking fuzzy wig, then climb behind the wheel of his 1976 AMC Pacer and tool around in the pits. He’d routinely enter the car in burnout contests and even exploded a tire once. The Pacer would scorch the quarter-mile with passes in the high 18-second zone, which Cherbitz described as downright “scary.”

Alan’s wife had a general disdain for the curious little car and wouldn’t let him keep it at their house. When he bought the thing, it was consumed with rust and wouldn’t even run. “Just as soon as it will crank, you’ve got to get that thing out of here!” she pleaded. It was a big hit at the track, though, where Alan stored the car after it was finally roadworthy enough to make the trip.

“We’re in the entertainment business, and if we can make someone smile then we’ve done our job,” Alan used to tell me. Cherbitz still comes to the track occasionally, even though he sold his interest to the very capable Victor Alvarez, who recently made the list of DI’s prestigious 30 Under 30.

And so it goes, the annual Snowbirds event often closes out my season, but it’s a very short break as I return to Bradenton in January for the U.S. Street Nationals, and more wintertime events quickly follow. Before leaving Florida, I usually drive up the coastline alongside the ocean, sometimes stopping in Daytona and driving on the beach.

A few years ago, I found a pull-off in Ormond Beach right beside the ocean. I thought it would be an adventurous place to spend the night, so I rolled out a sleeping bag inside the Drag Illustrated Sprinter van and fell asleep to the sounds of waves crashing onto the shore. I awoke early enough to see the sunrise before hurrying home to see it snow a few days later.

So, from the spectacular skies over Bradenton to my beloved Everglades fishing adventures (not to mention some really great drag racing) the past decade of traveling to Florida has already provided enough memories to last a lifetime.

This ‘On the Road’ column originally appeared in DI #153, the Season Preview Issue, in February of 2020.