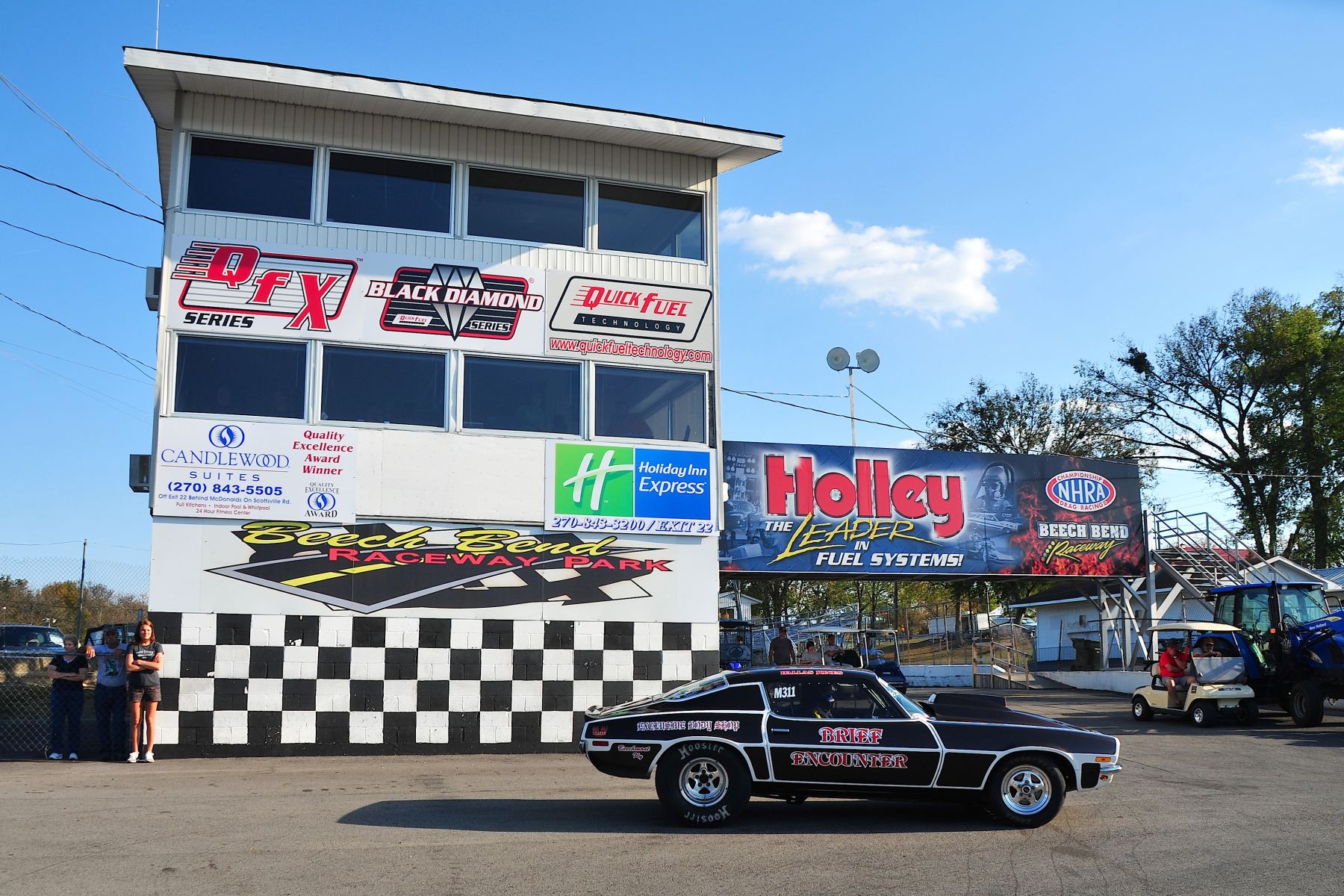 When you think of “additional” entertainment that might be offered at a drag strip, you usually think of swap meets, concerts, tractor pulls or other common outdoor functions that are sometimes held on the same property of a drag strip.

Roller coasters, haunted houses and cotton candy, however, doesn’t instantly come to mind, unless of course, your local track happens to be Beech Bend Park in Bowling Green, Kentucky!

[Editor’s Note: This column originally appeared in DI #115, the Tomorrow Issue, in November of 2016.]

The only thing that’s more noteworthy than the sheer oddity of combined entertainment is Beech Bend’s longevity. Amazingly, this scenic piece of property has been entertaining the community in some form or fashion since 1898! Beech Bend Park first opened over 120 years ago with just two very simple offerings: A swimming hole in the river and pony rides! Eventually, though, a large swimming pool replaced the time-honored practice of leaping into the Barren River. Years later, a rollerskating rink was added, followed by a dance hall and bowling alley.

Many of the early attractions have come and gone as people’s interests changed, and let’s face it, they’ve changed a lot since the latter 1800s! Understandably, the details are sketchy on the exact timeline of Beech Bend’s renovations, but things began to really change in the 1940s when Charles Garvin bought the facility and began adding a vast array of carnival-type rides that would become Beech Bend’s amusement park. The heyday of the park was believed to be in the 1960s, back when gate admission reportedly cost just 10 cents!

The first racing that ever took place at Beech Bend Park can be traced all the way back to 1949, when a motorcycle race was held on the facility’s newly constructed dirt oval. A few years later, when organized drag racing began to sweep the nation in the 1950s, Beech Bend was quick to include a dirt drag strip to the sprawling facility.

Drag racing at Beech Bend was quite primitive in the early years and when it rained it became exceptionally muddy, as you might imagine. Dallas Jones, who’s owned the track since 1984, was a racer himself during that time frame and experienced the glory days firsthand. “Back in the 1950’s, we’d change tires when it rained, and it was muddy as all get out!” he laughingly recalls. Eventually the track was paved and even repositioned within the park. “The track we race on today was finished in 1973,” says Jones.

When the late 1970s rolled around, the entire Beech Bend facility went into a state of decline including the drag strip as well as the amusement park after then-owner Charles Garvin’s health began to fail. He passed away in 1979 and the facility actually closed for a short period. It was briefly reopened by an ownership group, which included country music singer Ronnie Milsap. It was a short-lived endeavor and the park’s future was once again in serious jeopardy.

That’s when Dallas Jones entered the picture; this time as a potential buyer of the facility. By then, ownership of Beech Bend Park once again belonged to the Garvin heirs, and Mr. Garvin’s son, David, wanted very much for Jones to own the track. “David told me that it would have pleased his father very much if I owned this track, so David saw to it that a business loan was obtained for the drag strip and 105 acres,” recalls Jones.

The following year, Jones held the most heavily attended event that the track has ever seen, when 655 race cars poured through the gates for the 1985 NHRA SportsNationals. The track has hosted many more big events in the 33 years that Jones has owned the track.

Back in early November, I had the opportunity to sit down with Dallas in the tower early one morning and hear about his passion for all things racing. At 76 years of age, he still has the fire and desire to keep the track going, although his grandson, Broc Porter, provides a great deal of help these days. “I’ve slowed down some and Broc takes care of things for me,” Jones smiles.

Everything about Beech Bend has a unique story and I couldn’t help but notice the vintage wooden seats up in the grandstands. “Those seats were here when I bought the place back in 1984. They tell me they came out of a baseball stadium in Nashville, Tennessee,” says Jones.

Then came the story of the legendary flood of 2010 that nearly washed the whole track away! The aforementioned Barren River, which runs alongside the track, sometimes rises with heavy rainfall, but during a particular stretch seven years ago it reached catastrophic levels! “We broke a 73-year record for rain fall!” Jones remembers.

The track completely disappeared momentarily, and the second story of the tower was even flooded. Amazingly, the tip of the bleachers were barely visible, and the concession stand floated away!

The cleanup required a massive effort, but eventually they got the track operational again. “Every now and then we still find mud on something and we just laugh and say, ‘Yep, it’s from the flood of 2010!’” chuckles Jones.

Over three decades ago when Jones bought the track, the once-thriving little amusement park on the property had been shut down years earlier. All that remained was a pile of dilapidated junk barely visible beneath the tall weeds. Jones only bought the drag strip in the very beginning, while the amusement park sat eerily desolate.

Years later, after the drag strip was once again thriving, he made a bid to purchase the amusement park. He was successful and the renovations cost a small fortune, but he eventually reopened it with 43 attractions, including a vintage wooden roller coaster, water park, petting zoo, swings, bumper cars, restaurant, haunted house, etc. Sometimes racers will turn their kids loose in the amusement park while they spend the day drag racing. It’s a beautiful and very unique arrangement! For a touch of nostalgia, Jones even has one of the original park signs from 1898 on display.

The amusement park is in operation from Memorial Day to Labor Day, while the drag strip’s season is several months longer.

Although the park was closed when I stopped by in November, Jones gave me a fascinating tour by way of golf cart. As we slowly taxied past each carnival ride, I’d usually inquire, “Sir, have you ever ridden this one?” His answer each and every time was, “Many times!” I think it’s safe to say Dallas Jones is a charter member of the “Young at Heart” club.

Beech Bend’s website describes the facility as “one of a kind” and while many things get exaggerated in life, this is one claim that’s rock solid!