“Our testing showed Lucas Oil Extreme Pressure Grease delivered more consistent torque specs than other lubricants,” said Joseph A. Moch, president and CEO of Oliver Racing Parts, which is celebrating its 30th anniversary in 2013. “Dependable results are critical to engine builders who are striving to reach the highest levels of engine performance.” 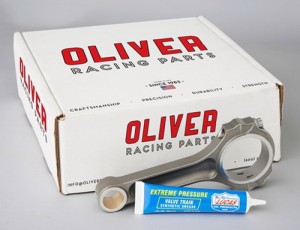 “For years Lucas Oil has been making terrific oils and greases for race teams, and now a lot of equipment manufacturers are realizing what the racers have known for a long time, that our products are the best on the market,” said Forrest Lucas, founder of Lucas Oil Products, Inc. “We’re very happy to have Oliver Racing Parts supplying our Lucas Oil Extreme Pressure Synthetic Grease, a powerful lubricant that will perform perfectly with their I-Beam Connecting Rods.”

Oliver’s I-beam connecting rods, manufactured in the United States from American mill-certified aircraft-quality steel, feature their exclusive “Parabolic Beam®” design that delivers the highest strength-to-weight ratio of any connecting rod in the industry.

About Lucas Oil
Lucas Oil Products, Inc., www.lucasoil.com, a world leader in the manufacturing of High Performance Lubricants and Problem Solving Additives, was founded in 1989 by former trucking company owner Forrest Lucas and his wife Charlotte. The company markets 150 unique products in 34 countries around the globe and uses its involvement in motor racing for R&D while generating sales through all the major retail automotive chains, truck stops and independent speed shops across the USA. Its television production arm, Lucas Oil Studios, maintains its own high definition production studio and produces more than 300 hours of programming for CBS, CBSSN, NBC, NBCSN, SPEED, FUEL and the Lucas owned MAVTV American Real Network.  MAVTV American Real www.mavtv.com is the fastest growing independent network in the USA and is now in 26 million households.