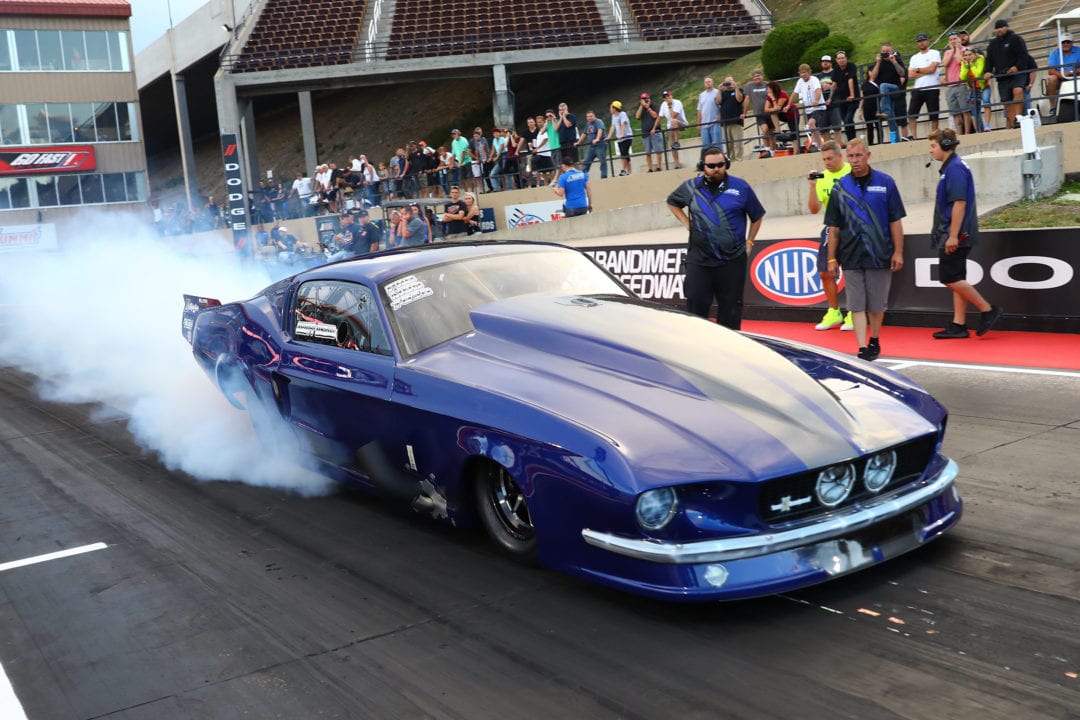 With $100,000 on the line, the stars competing in the third annual Drag Illustrated World Series of Pro Mod presented by J&A Service, Elite Motorsports, Big O Tires and benefiting One Cure looked to make an opening statement on Friday at Bandimere Speedway.

The trio of Scott Oksas, Stevie “Fast” Jackson and Rick Hord did just that, as each fired an impressive salvo to lead the way on Thunder Mountain.

The scoreboards were turned off as the Pro Mod drivers made three runs on Friday, but it didn’t take a trained eye to see that the two turbocharged cars and Jackson’s blown Bahrain 1 Racing Camaro positioned themselves nicely.

For Oksas, it’s a continuation of two solid days of testing, as he’s now made nine runs in his ’67 Shelby Ford Mustang he considered better than the previous one.

“Our gameplan was to go faster every pass and we did that, so we accomplished our goal,” Oksas said. “Everything is good. We did what we wanted to do, gradually stepping on it and trying to keep it consistent.”

Eliminations for the WSOPM begin at 6 p.m. MT on Saturday, with the winner collecting a $100,000 check at the end of the night on Thunder Mountain.

Oksas, who made his WSOPM debut in 2018, already ran quicker during testing than his best pass a year ago. He added to that on Friday, and dialed it up even more under the lights during the final pass of the night.

It puts him in a strong position heading into Saturday’s eliminations, where Oksas simply hopes to maintain the status quo.

“We just want to keep it going,” Oksas said. “The two days of testing went great and with all we did there we were able to improve every pass. Now we just have to maintain and see what happens (on Saturday).” 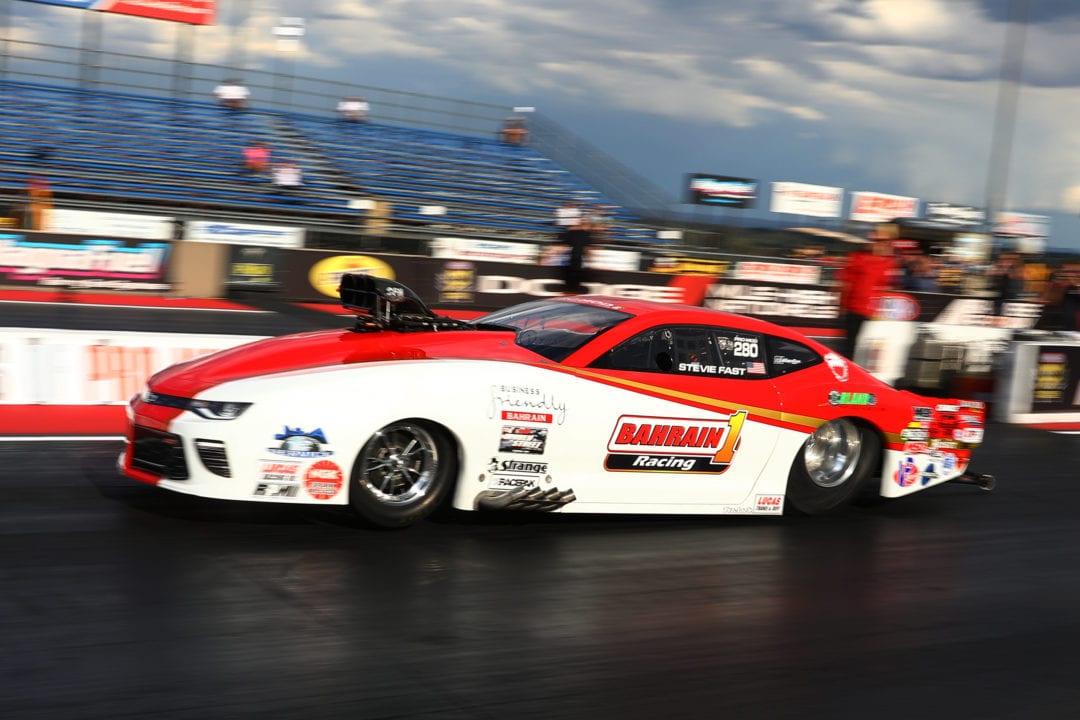 For Jackson, the NHRA Pro Mod points leader, Friday’s impressive trio of runs came with a stern message and a belief that a supercharged car can be successful on the mountain.

The fan favorite Pro Mod superstar worked through some issues during testing on Thursday, but came out like a cannon on Friday. He had hoped to send a message with his performance and Jackson left no doubt that mission was accomplished.

Jackson has raced on Thunder Mountain each of the three years of the WSOPM, and hopes to have the ultimate success for the first time on Saturday. It’s already been a dream season for Jackson, racking up two NHRA Pro Mod wins and holding a commanding points lead. But he’s focused on adding a $100,000 payday to his list of accomplishments in 2019.

“We changed some new components, and when you do that you have growing pains and things don’t work like they’re supposed to,” Jackson said. “But we got that out of the way yesterday and it flew right down there today.

“These cars are an ever-evolving set-up, so you can use some of the data from last year, but this car has never raced here and our engine program is different. Billy Stocklin, our crew chief, takes really good notes so it makes it a little easier to step up and hit that thing.” 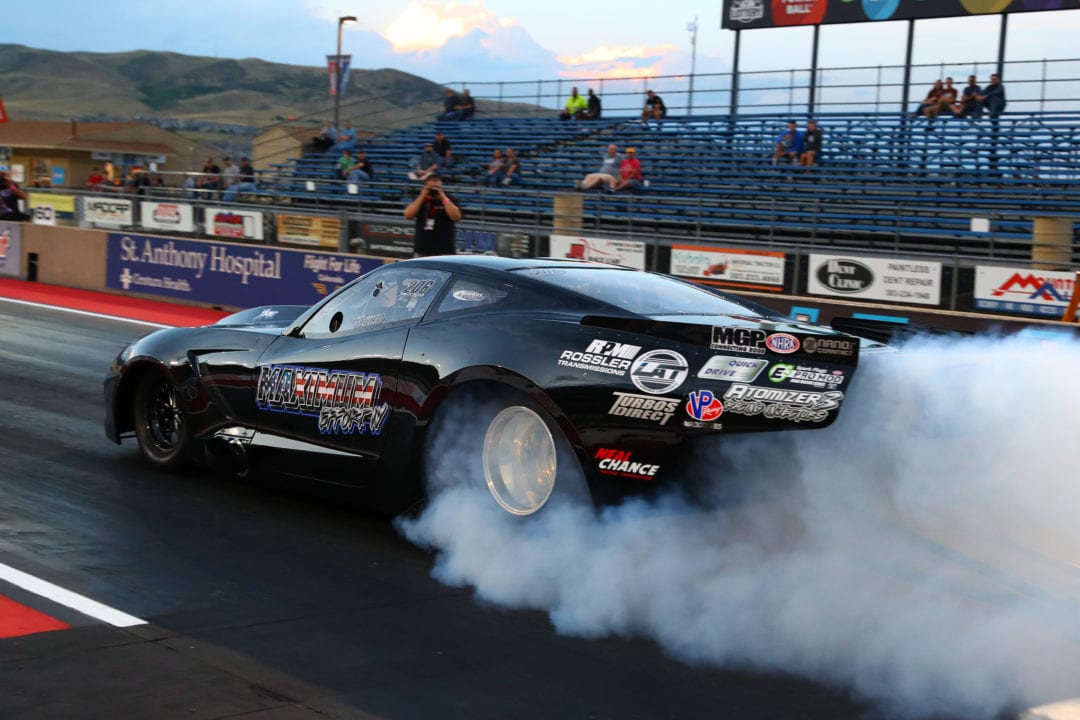 Like Oksas, Hord has made one splendid pass after another on Thunder Mountain, delivering a pair of blistering passes to close out Friday. It left him satisfied, but also fully aware he wasn’t the only one performing at a high level during day one of the WSOPM.

“I feel good about our runs, but you never know,” Hord said. “That ‘Stevie Fast’ guy ran right in front of me two times and it looked like he was on really good runs, too. So he’s got some cards and there’s some new guys here running well, but I think our cards are pretty good as well.”

It’s been a strong turnaround for Hord in his turbocharged Maximum Effort IV Corvette. The veteran closed out 2018 with a bang, running well in Denver and then picking up his first NHRA Pro Mod win. But 2019 has been a different story, as Hord has struggled from the outset. Things changed dramatically on Friday and Hord will look continue that turnaround in eliminations.

With $10,000 headed to the winners in both the MagnaFuel ProStar 16 and QuickStar 16 Shootouts presented by Menholt Auto Group in Top Dragster and Top Sportsman, massive fields delivered right from the outset on Friday.

Mick Snyder led the way after two sessions in the MagnaFuel Quick Star 16 in Top Sportsman with a stout run of 6.207-seconds at 225 mph in his blown Evolution Race Development Camaro. The qualifying bump is a remarkable 7.276 as 12 competitors made 6-second runs on Friday. 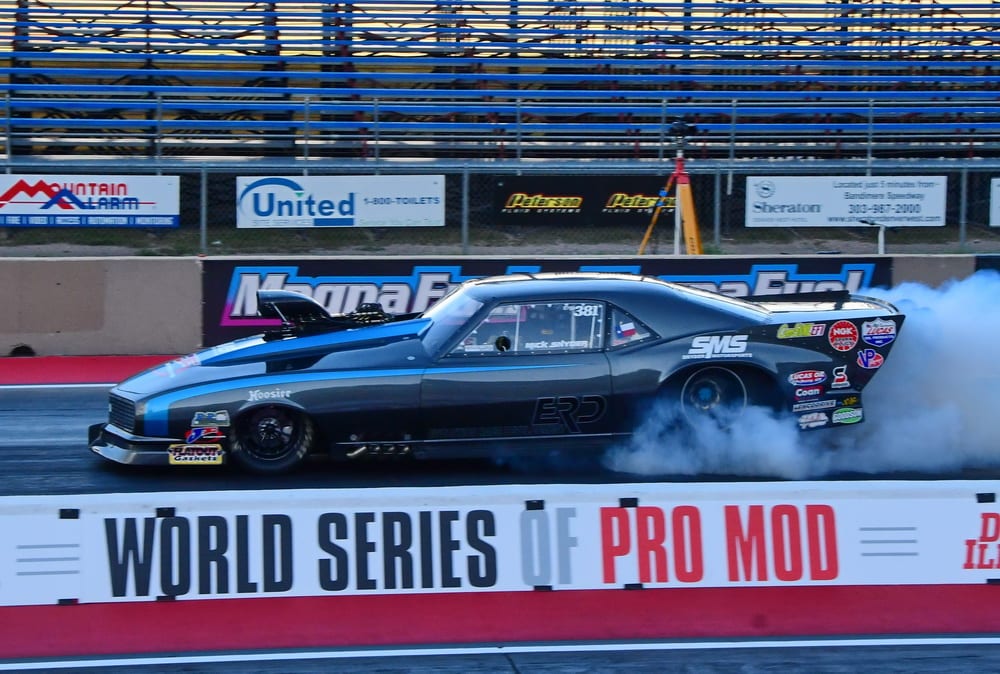 Robert Kanewisher’s 6.039 at 237.67 paced the MagnaFuel Pro Star 16 field in Top Dragster, as 40 dragsters made passes during the two qualifying sessions on Friday. The bump currently sits at 6.511 with one remaining session.

Gates open at 12 p.m. MT on Saturday at the World Series of Pro Mod at Bandimere Speedway. The final round of qualifying in Top Dragster, Top Sportsman, Sunoco King Street and XDR starts at 2 p.m., while pre-race ceremonies begin at 5:30 p.m.

The first round of WSOPM eliminations takes place at 6 p.m., as the Pro Mod stars will compete for the $100,000 prize on Thunder Mountain.