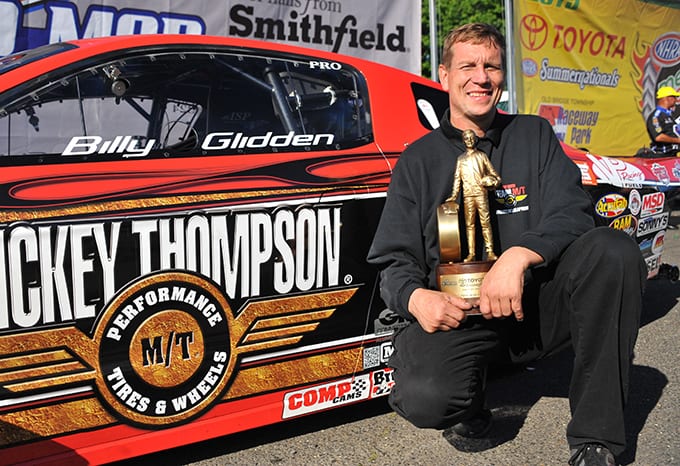 “This relationship brings the best of the best together to create an NHRA Pro Mod dream team,” says Tom Kundrik, Motorsports Manager for Mickey Thompson. “Billy has been racing with our tires for many years. With this incredible car and additional support from PTE, the sky is the limit.”

“Billy is a fierce competitor in every drag racing class he competes in,” says PTE Founder and President Harry Hruska. “We are so excited to have Billy behind the wheel of the PTE Pro Mod Camaro. He has the work ethic, focus and determination to win races and sets the bar high. Together with Mickey Thompson, our team is unstoppable.”

“At first I thought it was a joke,” says Glidden. “I thought maybe someone had put him [Hruska] up to it. I knew it was him on the phone, but I couldn’t believe he was proposing that I drive his car.”

Once Glidden realized that Hruska was more than serious about the proposition, and that his longtime sponsor Mickey Thompson was 100-percent on board, he started to get excited, but it’s still hard for the legendary son of Pro Stock icon Bob Glidden to believe.

“I’m just struggling a little bit with it,” he says. “It’s not quite registering that it’s actually happening. I fear something shitty is going to come along and make it not happen, or that I’m going to wake up and it’s going to not be real – I don’t sleep as it is. It’s certainly quite the opportunity for Shannon [wife] and myself. It’d be good to have people bitching about me again.”

Harry Hruska’s Precision Turbo & Engine-sponsored 2014 Chevy Camaro currently holds both ends of the NHRA Pro Mod record with a 5.751-second pass recorded in Gainesville earlier this year with driver Jonathan Gray and a 259.66 mph pass, which was made in October of 2015 with driver Donnie Walsh at Las Vegas Motor Speedway. 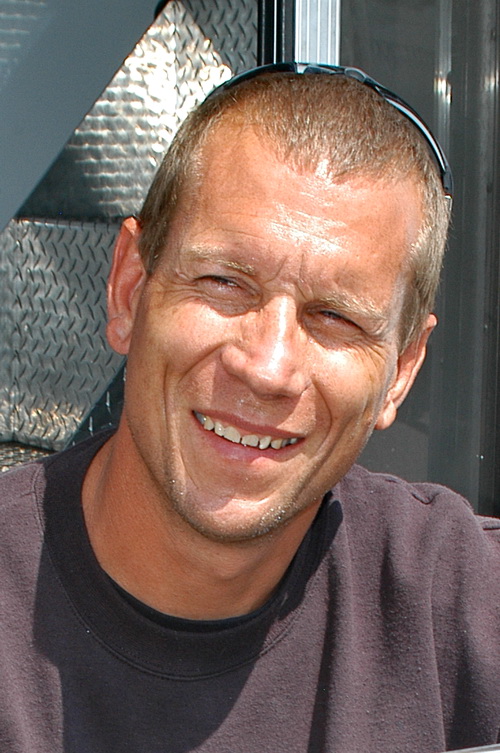 “I’m not even asking him how can we make this thing quicker,” admits Glidden, chuckling. “I’m asking about the weak links. What are the areas that I can possibly help? Obviously, the thing has big power, possibly the most in the class. I’m not trying to be disrespectful to anyone, but clearly Harry knows how to make a whole lot of power. I’m not even thinking about power. My ass is puckering right now and I’ve not even made a run yet. I remember two years ago at Indy when I ran their car, we won the first round and I went 5.90 at 238, and up until that point I’d been running 230-231. Just 6-7 mph, to me, was very noticeable inside the car. Holy crap – now we’re talking about another 20 mph over that.”

The driver change hasn’t come without work, though, as Larry Jeffers and the team at Jeffers Race Cars outside St. Louis, Missouri, have worked around the clock in recent days to make the necessary changes to the driver’s compartment to accommodate Glidden.

“I told the guys as soon as I sat down in the car that it wasn’t going to work,” says Glidden. “I wasn’t trying to throw a wrench in the gears or anything, but I knew in order to do the best possible job in the car, I can’t just be strapped in; I can’t just be attached to the bars. I need to feel like I’m part of the car. So, they went right to work, and Harry and everyone was prepared to do whatever needed to be done to get me comfortable in the car. I told him if he’ll wear a radio, if I’m not having any issues, I’ll tell him everything I think should be done for the next run before I turn off the race track. He thought I was kidding, but I really wasn’t. A lot of times before I’ve even made it to the finish line I’ve already got it in my head what I need to do to the car for the next run. I know that sounds quick, but I’m sure there are others like that – maybe Greg Anderson, or Tim Wilkerson or Rickie Smith, absolutely.”

It doesn’t take a great deal of imagination to consider the potential of Hruska and Glidden joining forces, especially with the involvement of Precision Turbo & Engine and Mickey Thompson, but Glidden, for one, is trying to keep himself in check.

“Trying to kind of keep a lid on our enthusiasm,” says Glidden. “I don’t want to set the bar so high, put such high expectations on ourselves that we end up disappointed, but I’ll admit we’re excited. This is a big opportunity for Shannon and I. We’ve never had anything like this before. We won’t even have reason to go in the trailer, honestly, and I don’t know that we’ve ever even thought about a situation like that. Holy crap.

“But I do think we could make a really good team,” concludes Glidden. “I think Harry and I could mesh really well. I think we’re going to have to get this deal to a race track and tow it up to the starting line before I’m going to fully believe it.”

While Glidden anticipates making a few test passes in the coming weeks before the NHRA Summernationals in Englishtown, New Jersey, the next stop on the 10-race J&A Services NHRA Pro Mod Drag Racing Series tour, he’s comfortable with whatever happens next.

“If Q1 in Englishtown is my first time in the car,” says Glidden, “I’m good with it.”