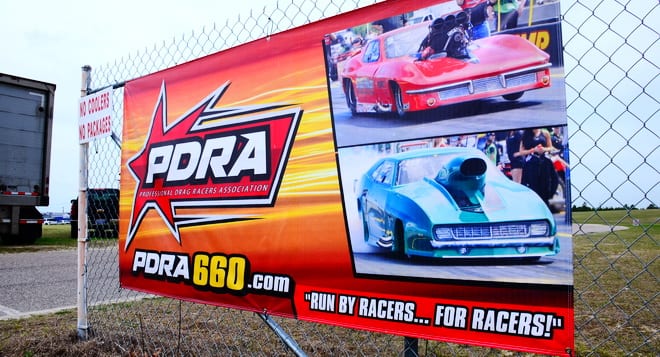 Anyone who’s read this column even sporadically over the years knows I pretty much speak my mind here when I see something that bothers me or I believe needs improvement. Well, something is bothering me and it has to do with the Professional Drag Racers Association (PDRA), now just a couple of races into its sophomore season.

Actually, it has less to do with the PDRA than with self-appointed critics who feel compelled to financially analyze each PDRA event immediately upon conclusion.

Now, anyone with even basic math skills can add up the PDRA’s announced purse and have a baseline cost to start from. And a wild guess can be made as to what a venue might charge to host a PDRA event, along with further speculation on various wages, equipment rentals and promotional efforts. Then tack on an extra 10 percent or so just for good measure and a solid multi-six-figure sum will be the inevitable result.

The next step is to obsess over car count, how many spectators were in the stands—and how many actually ponied up the cash to get in under this year’s new paid-admission policy—before loudly (and often I feel a little too proudly) proclaiming, “There’s no way they made money! It was a financial bloodbath!” To which I respond, who cares?

Please don’t get me wrong, I care deeply about the success of the PDRA. I’ve been there from the very beginning, through the tremendous rise and fall of the ADRL, through the doomed, short-lived XDRL experiment, and now through the creation and progression of the PDRA as the inherited home for professional eighth-mile doorslammer racing. It’s no secret, I love this style of racing and I’m thankful the PDRA exists, for both personal and professional reasons.

No, I’m saying who cares about the opinions of the naysayers and Chicken Littles of the world who feel compelled to point out what they perceive as harbingers of financial doom—despite not having a single penny at stake. Seriously, the only people with any legitimate concern over what the PDRA does, especially expense and profit wise, is the ownership group of Tommy Franklin, Gene Hector, Roger Henson and Mitchell and Jason Scruggs.

Honestly, whether right or wrong I understand the inclination to make snap judgments and declarations (just ask my wife), but when it comes to dissecting an individual’s (or group of individuals) finances, I just think a little more respectful restraint is in order. I mean, this is not the NHRA or IHRA or NASCAR or Formula 1; the PDRA exists solely at the discretion of five currently active competitors. Why deliberately rain on the parade? What purpose does it really serve?

Instead of immediately trying to point out financial shortcomings after each event I wish more people would simply appreciate and thank these men for having enough vision, desire and willingness to put themselves—and their bank accounts—on the line for the betterment of the sport. Consider this my public thank you.

On the other hand, I’m no Pollyanna. Just as I’m confident the ownership group realizes, I know there are real, pressing, money-related issues for the PDRA to address if it’s to continue in the long term. I’ve spoken about finances with each of the PDRA’s principals several times since the organization’s inception in December 2013 and to a man they’ve exhibited consistent resolve tempered by an understanding that profitability could be long coming. And so what if it is? If it’s their choice to fund the organization for as long as it takes—or as long as they can—then I’ll give them the benefit of the doubt and support their mission. I just don’t see the point in highlighting the obvious when it comes to challenged finances—unless, of course, someone is getting hurt or shafted in the process.

Unfortunately, that happened with both the ADRL and XDRL as toward the end several racers never got paid their rightful winnings. In those instances any criticism pointed their way was justly delivered; in fact, there probably existed a responsibility to speak up in defense of those without a public voice. However, that’s not been the case with the PDRA and I just don’t see it happening, either, given the caliber of the owners involved. I’ll concede the PDRA may not be around forever if profitability proves permanently elusive, but I’m confident its bills will get paid in the meantime, regardless.

I’m also not saying the PDRA should be immune to criticism; far from it. After all, the PDRA is a significant drag racing organization with the capacity to affect many lives through its decisions large and small with each passing event. And certainly many people—team owners, drivers, crew members, PDRA employees, fans, and yes, even us lowly media types—have vested interests in how the organization functions. Though privately held, as a publicly operating company the PDRA most definitely has to remain open to comment, both good and bad. The trick is to formulate any critical comments in a more productive, constructive manner; something I believe is lacking from the PDRA’s unofficial financial prognosticators.

If there’s genuine concern for the PDRA out there, maybe a few suggestions to pump up the show’s value and draw more fans would be a better approach. Myself, I think the PDRA is already attracting pretty much its fair audience as far as dyed-in-the-wool Pro Mod fans go. Discounting the season opener at Dallas, where rain reigned supreme, I think the race early in April at Rockingham provided a reasonable indication of what the PDRA in its current form can expect crowd-wise. Attendance on Saturday for the three-day event was estimated at about 5,000 fans, with perhaps half that many showing up for final eliminations on Sunday. Which wasn’t bad, but as was immediately pointed out afterward, still not nearly enough to cover the cost of putting on the event.

But if that’s all the drag racing fans PDRA can reasonably expect to show up to watch Pro Extreme, Pro Nitrous and the rest of its predominant doorslammer show, maybe it needs to do more to attract the casual fans, the curiosity seekers and those just looking for something different and fun for the whole family to enjoy on a hot summer night?

Perhaps another jet car could be booked in to complement the Tulsa County Heat Wave that currently puts an end to each PDRA day at the track? If one is good, twice as many is better, right? Or maybe bring in two or four wheelstanders to race? Or coax out the descendants of Bennie the Bomb? Regardless of what hardcore fans may think of these novelty acts, maybe it’s time to replicate the shows of days gone by? If it worked for drag racing’s so-called “Golden Age,” who’s to say it won’t work again to fill the stands and PDRA ticket booth cash drawers?

It’s all part of trying to stay positive and not letting defeatist, financially insecure talk take over post-race discussions of the PDRA. There’s absolutely no question about the quality of the PDRA’s cars, drivers, teams, competition and organization, and so far as I can see no legitimate reason at this point to try and instill doubt about its capacity to carry on. At least I’m looking forward to the rest of this season and taking it from there.