Northeast Dragway continues to thrive since opening for business 18 years ago. Nestled in Hertford, North Carolina, which is among the oldest towns in the state, Northeast Dragway by contrast, represents one of the newer drag strips to open in the Tar Heel state, with a construction date of 2000. At the time of its grand opening, drag strip owner and builder Curtis Trueblood, a lifelong Hertford resident, made note that the northeast tip of North Carolina was wide open for a new drag strip, even in a state where tracks are plentiful, with around 20 in operation.

The main motivation wasn’t because Trueblood was a drag racing enthusiast at the time, but rather, he simply owned the perfect piece of property that he had acquired years earlier. The parcel of 98 acres that adjoined Trueblood’s childhood home came up for sale in the 1990s and he was excited at the thoughts of buying it and simply logging the property initially, not really having a long-term plan in mind. It wasn’t until the land was cleared and reseeded that Curtis realized the dimensions were perfect for an eighth-mile drag strip. “My background was actually in tractor pulling, but I thought this particular piece of property would be perfect for a drag strip,” Trueblood explains.

The track he constructed nearly two decades ago is one he strived to make safe and efficient, and while he declares that the track isn’t fancy, the grounds are meticulously maintained, and the natural beauty surrounding the track creates an undeniable appeal. If you continue in an eastward direction from Hertford you’ll be looking at the ocean in about an hour. The coastal climate plays a favorable role in the track’s operation throughout the year. “We usually try to open up around February and run through late November,” says Trueblood.

It was unseasonably cold this past winter before going straight into excessive summer heat right after the 2018 racing season was getting cranked up. “The weather has been crazy this year and there’s just no way to predict it either, but because of things like Facebook and our track website, it’s so much easier these days to keep our racers informed of any scheduling changes, should a storm cause us to have to cancel the race abruptly,” Trueblood says.

The track has been IHRA sanctioned for much of its existence, although Trueblood decided to go his own way in recent years, and says he’s happy with the track’s current independent status. “Even after going independent I was able to keep my same insurance on the track, so that was certainly a plus.”

Trueblood has seen the drag racing landscape steadily change over the years, particularly with the declining participation of bracket racing, with a noticeable shift toward grudge racing and 10.5 competition in this region. Nothing, however, has surprised him more than the surging interest in diesel drag racing, both in the department of performance as well as participation.

“From a performance standpoint, we’ve got trucks that weigh nearly 7,000 pounds and can run in the 6-second zone, with some slightly lighter trucks running in the fives.” The interest continues to build in this style of racing to the point that Northeast Dragway now hosts a pair of diesel events each year, both of which thoroughly pack the pits and grandstands. “Those diesels are strong, too – hardly ever do they break!” Trueblood smiles. 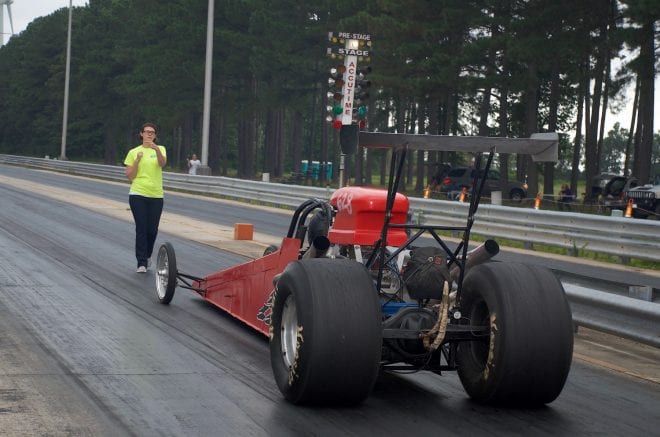 The track also hosts weekly test-and-tune sessions, lots of grudge racing events, as well as eight bracket point races that are scheduled for 2018. Staying true to his tractor pulling roots, Trueblood also has plans to relocate a tractor pulling facility he owns to the expanded grounds of the drag strip. They recently broke ground on this project, and are making significant progress. “We hope to have the tractor pull facility up and running sometime this fall,” Trueblood says.

At 74 years of age, Trueblood is showing no signs of slowing down. He’s also been in the wrecker business since 1972, has owned and operated various garages, and is constantly trying to improve and grow his motorsports business. When the drag strip first opened, he operated it alongside his wife, Annette, and son Tony Curtis, and years later the grandkids have also joined in the operation of this family enterprise. While some of the finest sportsman race cars can be found in this area, the Trueblood family take great pride in updating and improving this facility with each passing year, much to the approval of those who enjoying coming here.

This Dialed In feature originally appeared in DI #135, the State of Drag Issue, in August of 2018.